Why Florida is an awsome place to live

This is our lounge area. Feel free to come in and get acquainted!
1411 posts

3 friends slain while preparing to fish at Florida lake

Three friends were slain just moments after gathering together for some night fishing at a lake in central Florida, authorities said Saturday. They were found by the father of one of the men who managed to call for help just before he died.

Polk County Sheriff Grady Judd, who has worked at the department since 1972, described the killings at a Frostproof lake a “massacre.” He said the men were beaten and shot.

“This is a horrific scene,” Judd said at a news conference Saturday near Lake Streety where the bodies were found. “I’ve been to a lot of murder scenes in my life, and this ranks among the worst.”

Judd said this is what investigators believe happened: Tillman arrived at the lake first to meet his friends for “night fishing” for catfish. When Rollins and Springfield arrived, they saw Tillman being beaten. The attackers then began shooting them.

Rollins was still alive when the attackers left and called his father for help. His father rushed to the fishing spot about 10 minutes away, but forgot his cellphone in the hurry to help his son. He drove to a nearby convenience store, and the clerk helped him reach authorities, but by the time they arrived, Rollins had died.

The state is grappling with a significant surge in coronavirus cases, reporting more than 10,000 new cases Monday alone.

The largest teachers union in Florida sued Gov. Ron DeSantis on Monday over his administration's push to fully reopen all public schools next month — even as the number of coronavirus cases in the state is spiking.

The Florida Education Association accused DeSantis and other state officials of violating a state constitutional mandate to keep public schools "safe and secure." The union asked a state court in Miami to halt the governor's reopening edict, according to a copy of the suit obtained by NBC News.

The lawsuit, filed in state circuit court, names several defendants: DeSantis, state Education Commissioner Richard Corcoran, the state Education Department and the State Board of Education. The legal filing is sure to escalate a nationwide political debate over reopening schools amid the pandemic.

"Gov. DeSantis needs a reality check, and we are attempting to provide one," Florida Education Association President Fedrick Ingram said in a statement announcing the lawsuit. "The governor needs to accept the reality of the situation here in Florida, where the virus is surging out of control."

3 friends slain while preparing to fish at Florida lake

The ocean does open up and consume areas of sea floor.

However, these are basically sink holes, similar to those that gobble suburban homes in Florida, NOAA says.

When it happens in the ocean, it's called a 'blue hole' and what's inside them is largely a mystery, NOAA reports.

Scientists have no idea how many blue holes exist or where they are most likely to be found, NOAA says.

Even something as simple as getting into them is tough, experts say.

"The opening of a blue hole can be several hundred feet underwater, and for many holes, the opening is too small for an automated submersible. In fact, the first reports of blue holes did not come from scientists or researchers, but actually came from fishermen and recreational divers," NOAA writes.

The year-long expedition begins in August and will explore a 425-feet deep blue hole known as Green Banana, that is 155 feet below the surface, NOAA says. The team will include scientists from Mote Marine Laboratory, Florida Atlantic University, Georgia Institute of Technology and the U.S. Geological Society, NOAA says.

"Blue holes and caverns are "scattered across Florida's Gulf continental shelf" and most are known for hosting "a high diversity of abundance of plants and animals," NOAA reports.

A blue hole 30 miles off Sarasota (known as "Amberjack Hole") was explored in 2019. The team found it to be an "oasis in an otherwise barren seafloor." That hole is 113 feet below the surface and was found to be 350 feet deep, NOAA says.

Among the things discovered at the bottom: Two intact—but dead—smalltooth sawfish, an endangered species, NOAA says. One of the sharks, a 12-foot-long male, was collected for study, NOAA reports.

Just weeks before schools must open across Florida, the numbers of new cases and hospitalizations due to Covid-19 have surged.

On July 16, the state had a total of 23,170 children ages 17 and under who had tested positive since the beginning of the pandemic, according to the Florida Department of Health. By July 24, that number jumped to 31,150.
That's a 34% increase in new cases among children in eight days.

And more children in Florida are requiring hospitalization. As of July 16, 246 children had been hospitalized with coronavirus. By July 24, that number had jumped to 303.
That's a 23% increase in child Covid-19 hospitalizations in eight days.

Is that bad? Is it good? As far as I can tell it's a bunch of numbers.
About that stereo
Top

David T. Hines, 29, of Miami, was arrested and charged last week with bank fraud, making false statements to a financial institution and engaging in transactions in unlawful proceeds.

Defense attorney Chad Piotrowski said Hines is a legitimate business owner who is anxious to tell his side of the story.

The bulls are always prejudiced against legitimate businessmen.
Top 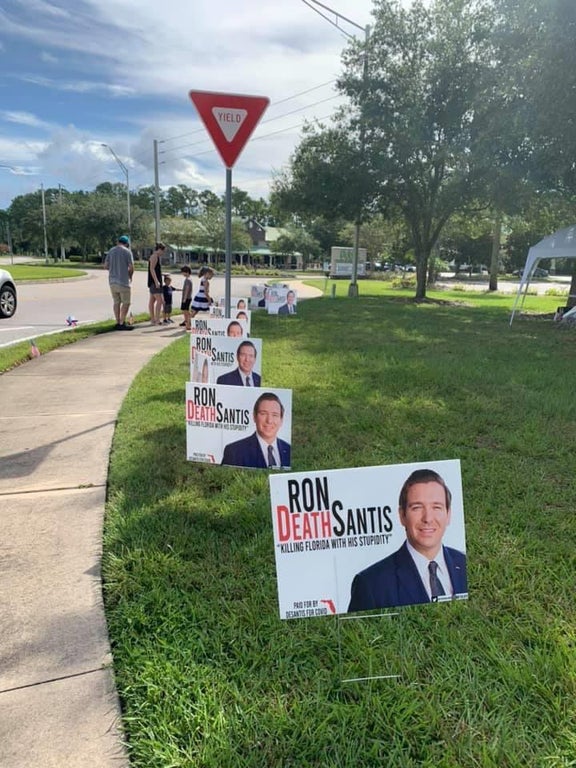 In other news: A Florida milestone: 5,000 captured Burmese pythons
Top

Three people have been charged for Twitter’s huge hack, and a Florida teen is in jail

Update: The Tampa teen allegedly pretended to work for Twitter’s IT department

Early on July 31st, the FBI, IRS, US Secret Service, and Florida law enforcement placed 17-year-old Graham Clark of Tampa, Florida, under arrest. He’s accused of being the “mastermind” behind the biggest security and privacy breach in Twitter’s history, one that took over the accounts of President Barack Obama, Democratic presidential candidate Joe Biden, Bill Gates, Elon Musk, Kanye West, Apple, and more to perpetrate a huge bitcoin scam on July 15th.

Apparently, he wasn’t alone: shortly after the Tampa arrest was revealed and after we published this story, two more individuals were formally charged by the US Department of Justice: 22-year-old Nima Fazeli in Orlando and 19-year-old Mason Sheppard in the UK. They go by the hacker aliases “Rolex” and “Chaewon,” respectively, according to the DOJ. The FBI says that two individuals in total are in custody. An unidentified minor in California also admitted to federal agents that they’d helped Chaewon sell access to Twitter accounts.

But according to an affidavit released late Friday, authorities have probable cause to believe Clark, the Tampa teen, was the one who got access to Twitter’s internal tools and directly carried out the scam. Specifically, he allegedly convinced a Twitter employee that he worked in the Twitter IT department and tricked that employee into giving him the credentials.

"Yes! A BIG REWARD!" ====> Click here to turn in a sicko
The arc of the moral universe bends towards chaos.
People who believe God or History are on their side provide the chaos.
Top
1411 posts