This is our lounge area. Feel free to come in and get acquainted!
13 posts • Page 1 of 1

Source
Shit happens. The older you get, the more often shit happens. So you have to try not to give a shit even when you do. Because, if you give too many shits, you've created your own shit creek and there's no way out other than swimming through the shit. Oh, and fuck.
Top

Spain’s Health Ministry has blacklisted thousands of alternative medicine products in a bid to crack down on phony ailments and health treatments it considers to have “no scientific basis”.

If you’re a big believer in homeopathic treatments, Spain is no longer the place with the biggest range of remedies that can be bought over the counter.

The country’s Ministry of Health has released a list of only 2,008 homeopathic products whose manufacturers will have to apply for an official government license for if they wish to continue selling them.

The rest of the more than 12,000 homeopathic ‘meds’ circulating around Spain for the past few years will no longer have the right to be sold in Spain nor the right to apply for the license.

It’s the latest blow for Spain’s homeopathy industry, once worth an estimated €100 million but which has seen a drop in public trust and therefore sales of around 30 percent in the last five years.

Why is $350,000 in Canadian aid being used to send homeopaths to Honduras?

Chagas disease (American trypanosomiasis) is an insidious tropical infection that begins with flu-like symptoms and can end with heart failure.

The only proven treatments are a pair of costly pharmaceutical drugs.

But a group of Canadian homeopaths say they can detect, prevent and treat the disease, and the federal government is paying to take their remedies to sick Hondurans.

Quebec-based Terre Sans Frontières (TSF) is spending $350,000 in aid money from Global Affairs Canada to dispatch more than a dozen volunteer homeopaths to Honduras over five years.
[…]
TSF spokesman Philippe Legault said homeopathy fills the needs of Hondurans not being met by their under-resourced health-care system.

"We're helping people to have some tools to work with their population and their health. We surely don't think that we can cure everything with homeopathy."

Legault points to the fact that the World Health Organization includes homeopathy as part of its Traditional Medicine Strategy. In response to an open letter from scientists and researchers, though, the WHO clarified that it doesn't support homeopathy to treat infectious diseases such as tuberculosis, malaria, influenza or infant diarrhea.

↑ Meanwhile Canada has ditched these homeopaths.

Cease therapy can be harmful, and campaigners say autism is not a condition to be cured

The Advertising Standards Authority (ASA) has ordered 150 UK homeopaths to stop claiming they can cure autism.

Five homeopaths are facing prosecution for advertising Cease “therapy”, which is not supported by scientific evidence and can be harmful to children.

The National Autistic Society praised the advertising watchdog’s decision, saying autism was not a disease to be cured but a lifelong part of many people’s identity.

Cease, or Complete Elimination of Autistic Spectrum Expression, is supposedly a method of ridding children of toxins – including from vaccines and medication – that some homeopaths claim cause autism. Therapists claim they can cure autistic children using homeopathic remedies and dietary supplements.

The treatment includes giving children four to five times more zinc than is recommended by the Department of Health, and 200 times more vitamin C. Excessive quantities of vitamin C can cause diarrhoea and vomiting. Cease therapists claim this response is evidence of the child’s body purging itself of toxins.

Are they now desperate enough to prescribe non-homeopathic doses?

PSA recently urged all community pharmacy banner and buyer groups to take a stand against the sale of homeopathy products by refusing to stock, promote, recommend or market them.

The call to action was issued via an open letter from PSA National President Dr Chris Freeman addressed to major banner and buying groups.

The move is aligned with the Choosing Wisely recommendations, a joint initiative between PSA and NPS MedicineWise, that was announced in December 2018. Pharmacists are recommended not to ‘promote or provide homeopathic products as there is no reliable evidence of efficacy. Where patients choose to access homeopathic treatments, health professionals should discuss the lack of benefit with patients.’

He cautioned that many patients may not be aware that there is no evidence to support the efficacy of homeopathic products to either prevent or treat conditions. It is possible that the public believes the contrary and that by making homeopathy available to patients, pharmacies could be seen as advocating for the products.

But by opting to use these products, patient health could be at risk, as it could mean they reject or delay treatments that do have evidence behind them.

Treatments should not be reimbursed until medical benefit is proven, experts say

French medical and drug experts say homeopathic medicines should no longer be paid for by the country’s health system because there is no evidence they work.

The conclusion in a joint report from the prestigious Academy of Medicine and the Academy of Pharmacy comes as the country’s centrist government considers halting the reimbursement of alternative health treatments.

In a joint statement, they declared “no homeopathic preparation should be reimbursed by Assurance Maladie [France’s health insurance] until the demonstration of sufficient medical benefit has been provided. No university degree in homeopathy should be issued by medical or pharmaceutical faculties.”

The academies said rigorous meta-analyses had not shown homeopathy’s effectiveness, but admitted it might have a placebo effect.
[…]
A survey by Odoxa in January showed 72% of French people believed homeopathy had benefits.

Gilles Bonnefond, president of one of the pharmacist unions, told RTL radio that stopping reimbursements would be a mistake. “Homeopathy is used by many French people,” he said. “When we’re dealing with patients, science isn’t the only rule.” [spoiler: $]

Homeopathic products now come with a warning in Quebec

On the shelves of homeopathic treatments in Quebec pharmacies, small blue signs warn shoppers that what they are buying might not work at all.

“The effectiveness of homeopathic products is generally not supported by scientific evidence based on data,” the signs read.

The association representing pharmacy chains and banners, ABCPQ, sent out 6,000 warning signs to pharmacies in early March. They’re meant to “encourage a conversation with a pharmacist,” says representative Hugues Mousseau.

He said shoppers are free to choose any product they want, including homeopathic items. Products are designed to treat a wide variety of issues, from sleep deprivation to the common cold.

In March, Quebec’s College of Physicians publicly stated it does not recognize homeopathy as a valid treatment.

That position is echoed by the Order of Pharmacists. “Right now in scientific literature there’s no conclusive evidence that it works,” says president Bertrand Bolduc.

More than 8,500 homeopathic products are approved by the federal government. There’s currently nothing preventing pharmacies from selling them. “They’re approved by Health Canada so right now we’re in a catch-22,” added Bolduc.

Sounds metric but I like it.
This space for let
Top

Thousands of children put on alternative therapies amid measles outbreak, potentially exposing them to life-threatening illness 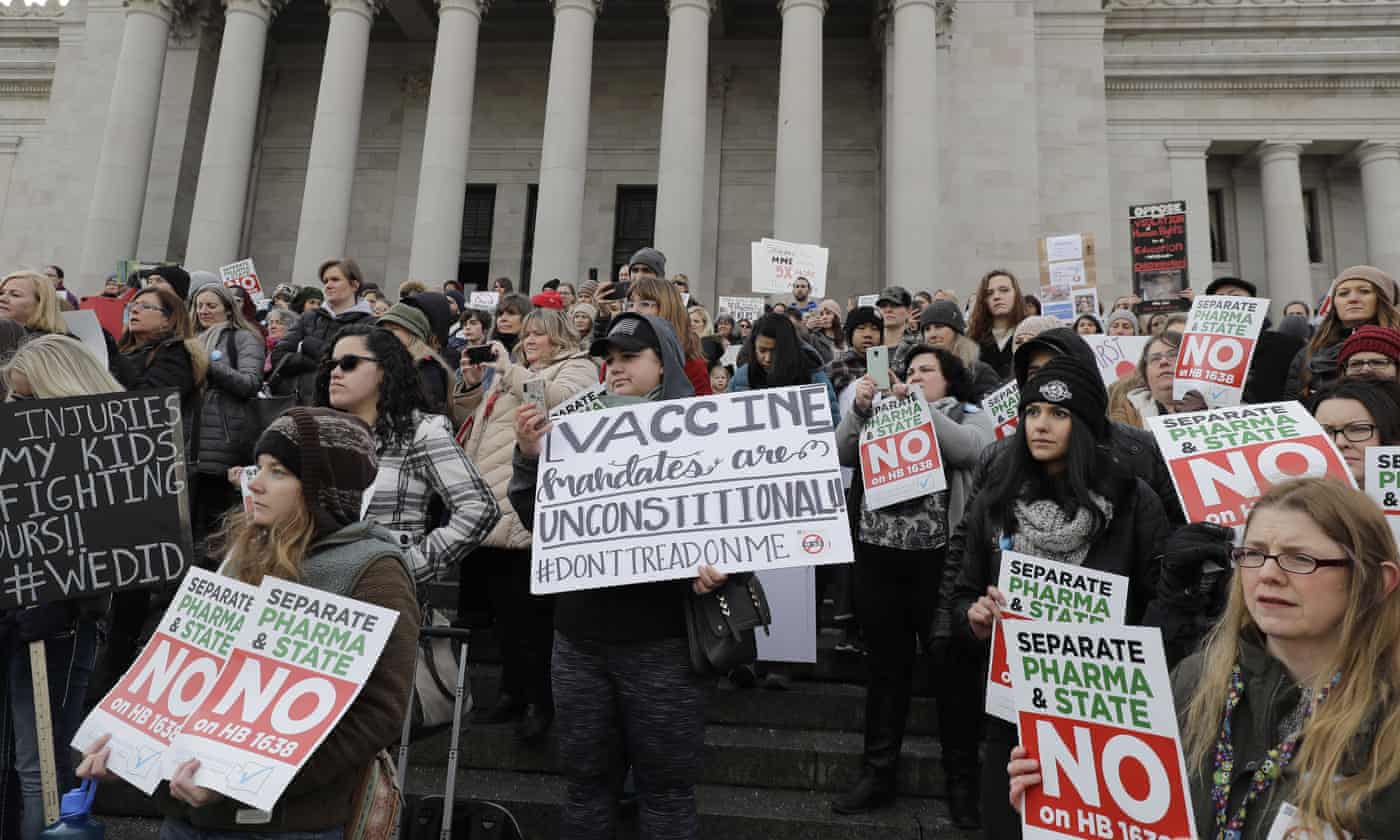 Rally held to protest proposed bill to remove parents’ ability to claim a philosophical exemption to opt their children out of measles vaccine at the Capitol in Olympia, Washington, on 8 February. Photograph: Ted S Warren/AP

Thousands of American children are being put on homeopathic alternatives to vaccination by practitioners who claim they can prevent measles and “cure” autism, the Guardian has learned.

At least 200 homeopaths in the US are practicing a controversial “therapy” known as Cease that falsely asserts that it has the power to treat and even cure autism. The acronym stands for Complete Elimination of Autistic Spectrum Expression.

The “therapy” relies in part on administering high doses of vitamin C. Advocates falsely say it repairs the harm caused by vaccination – a double untruth as most vaccines are safe and there is no link between vaccines and autism, a condition for which there is no cure.

In addition 250 homeopaths, some of whom also practice Cease, are promoting “homeoprophylaxis” that advertises itself as an “immunological education program”. More than 2,000 American children have been put on the program which claims to build natural immunity against infectious diseases, though there is no scientific evidence that it works.

There is a cure for stupid.

The stupid are too stupid to take advantage of it.

The Prince of Wales has come under fire after he became the patron of a homeopathy group, the Faculty of Homeopathy, which supports registered medical professionals with alternative treatment.

Following the announcement on Tuesday, Prince Charles came under criticism from scientists for associating himself with a group that is dedicated to a practice whose worth has come under question and which is banned by the NHS.

Emeritus Professor Edzard Ernst, who had previously labelled Prince Charles a "snake oil salesman" and claimed he had to retire early from University of Exeter after a complaint from the Prince’s private secretary questioned how Prince Charles could make a difference in his post.

“In view of Charles’s long love affair with homeopathy, this news is unsurprising.