This is our lounge area. Feel free to come in and get acquainted!
375 posts

Good luck with that.

Latest news he wants to send envoys to various Muslim countries to explain his position.
Top

Good luck with that.

Latest news he wants to send envoys to various Muslim countries to explain his position.

They don’t have email?
Top

France bans Turkish ultra-nationalists: Who are the ‘Grey Wolves’?

Group active in European countries with significant Turkish population, such as Germany, Belgium, Netherlands and France

ANKARA: In a move that is likely to increase tension between Ankara and Paris, French Interior Minister Gerald Darmanin announced on Monday that France will ban the Turkish ultra-nationalist group the Grey Wolves.
The group is linked to the Nationalist Movement Party (MHP), a political ally of the ruling government in Turkey.

During the recent conflict in Nagorno-Karabakh, where France and Turkey backed opposing sides, the group became notorious for organizing “Hunt for Armenians” marches in France and for vandalizing the Armenian Genocide memorial outside Lyon with their own slogans and references to Turkish President Recep Tayyip Erdogan.

During the march, the group members threatened Armenians with slogans such as “We are going to kill them.” Four people were injured in Lyon last Wednesday during clashes between Turkish nationalists and Armenians who were protesting against Azerbaijan’s military moves.

The Grey Wolves was established in the 1960s in Turkey by MHP as a militant wing and was responsible for triggering chaos in the streets in 1970s and 1980s when its members fought leftists and were responsible for many assassinations.

Samim Akgonul, a political scientist at Strasbourg University in France, said the Grey Wolves are not the most visible Turkish organization in France but they have been active from time to time, especially during crises related to the Armenian issue, such as the French memorial laws recognizing the Armenian genocide.

“Historically the supporters of the Turkish far right MHP party are organized autonomously in Europe, separate from Turkey’s official bodies such as the Turkish Islamic Union for Religious Affairs (DITIB), the European division of Turkey’s Directorate of Religious Affairs,” he told Arab News.

A suspect has admitted to the shooting of a Greek Orthodox priest in the French city of Lyon last week over a personal dispute, prosecutors have said.

The 40-year-old suspect told prosecutors the priest was having an affair with his wife.

The priest, Nikolaos Kakavelakis, 52, was shot twice with a sawn-off shotgun outside his church on 31 October.

He spoke to police after coming out of a coma on Wednesday.

The suspect, who is said to be of Georgian nationality, was arrested at his home in Lyon on Friday, French newspaper Le Parisien reported.

The suspect told prosecutors he had not intended to kill the priest, who was romantically involved with his wife, a 35-year-old Russian, the newspaper said.

1720 travel permit during a plague. 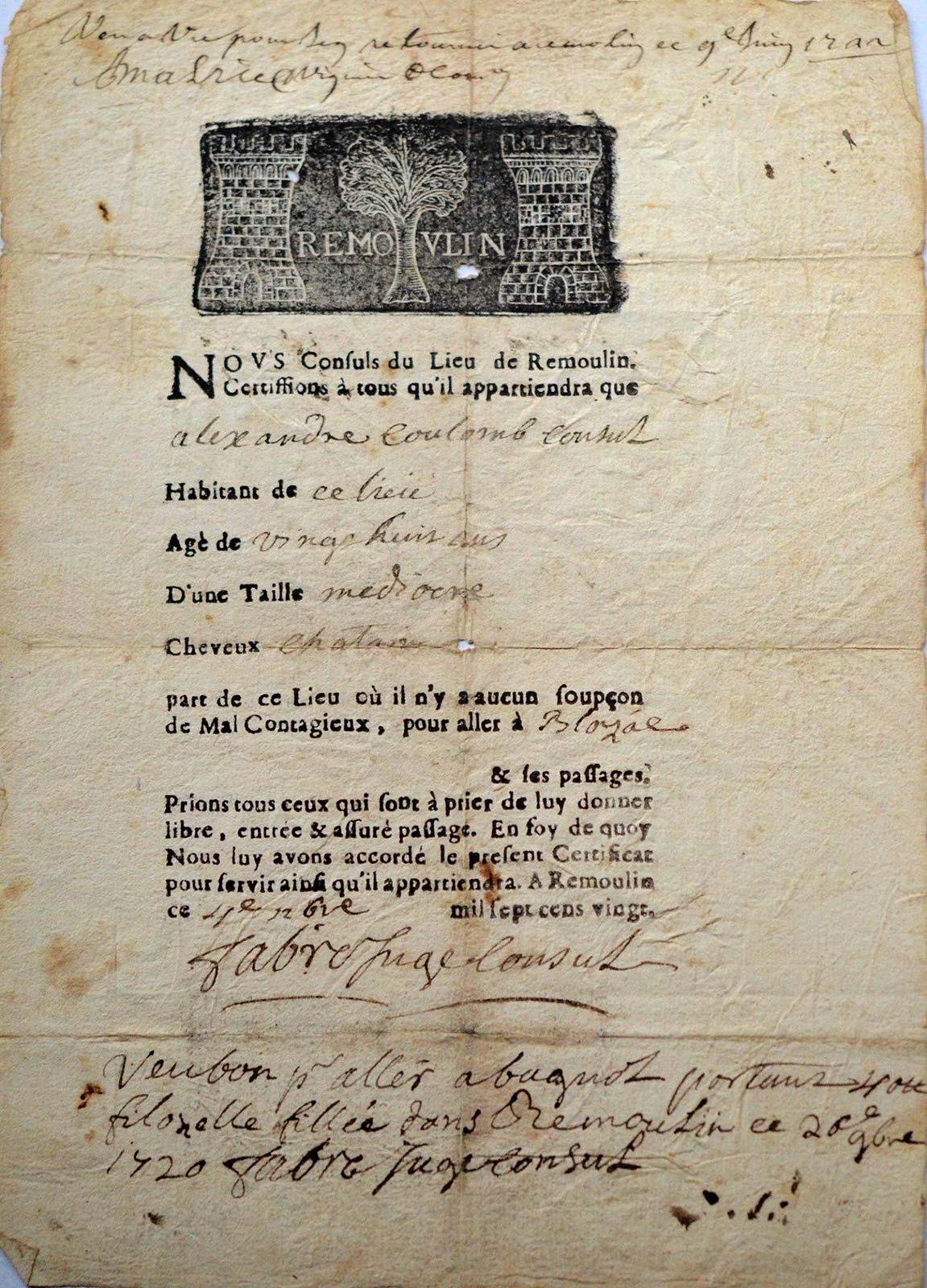 French lawmakers on Tuesday began debating a bill that could ban dissemination of images of police officers' faces, triggering protests in Paris and other French cities against the potential loss of a check against abuses of power.

France's security forces have long faced accusations of using brutal tactics when dealing with protesters, but also when confronting or arresting individuals, in particular from black or Arab minorities.

And now, Macron’s centrist government has proposed a new "comprehensive security" law that would institute reforms such as giving more autonomy to local police -- and potentially arming more of them -- and expanding the use of surveillance drones in high-crime areas.

Under the law, which would apply to civilians and journalists alike, it would be a crime to show images of an officer's face unless it has been blurred. Publication on social media or elsewhere with the intent of undermining an officer's "physical or psychological integrity" could be punished by a year in prison or fines of up to 45,000 euros ($53,000).

Journalists and rights groups oppose the measure and took to the streets as lawmakers began their debate, joined by Yellow Vest protesters and victims of police violence. Demonstrations took place in Paris, Bordeaux, Lyon, Grenoble, Marseille and in other French cities.

"The publication of images regarding police interventions are legitimate and necessary for a democracy to function," said the auditor.

Here too.
This space for let
Top

But at Lake Ed it's not folks shooting each other.

↑ You sure about that?

French President Emmanuel Macron has asked Muslim leaders to accept a "charter of republican values" as part of a broad clampdown on radical Islam.

On Wednesday he gave the French Council of the Muslim Faith (CFCM) a 15-day ultimatum to accept the charter.

The CFCM has agreed to create a National Council of Imams, which will reportedly issue imams with official accreditation which could be withdrawn.

It follows three suspected Islamist attacks in little more than a month.

The charter will state that Islam is a religion and not a political movement, while also prohibiting "foreign interference" in Muslim groups.

Mr Macron has strongly defended French secularism in the wake of the attacks, which included the beheading of a teacher who showed cartoons of the Prophet Muhammad during a class discussion last month.

Late on Wednesday, the president and his interior minister, Gérald Darmanin, met eight CFCM leaders at the Élysée palace.

"Two principles will be inscribed in black and white [in the charter]: the rejection of political Islam and any foreign interference," one source told the Le Parisien newspaper after the meeting.

The formation of the National Council of Imams was also agreed upon.

President Macron has also announced new measures to tackle what he called "Islamist separatism" in France.

The measures include a wide-ranging bill that seeks to prevent radicalisation. It was unveiled on Wednesday, and includes measures such as:
"We must save our children from the clutches of the Islamists," Mr Darmanin told the Le Figaro newspaper on Wednesday. The draft law will be discussed by the French cabinet on 9 December.

Nicolas Sarkozy, the former French president, will make history on Monday when he appears in court accused of corruption and influence peddling.

The case is the first of several investigations against the rightwing politician who led France between 2007 and 2012 to come before judges after years of attempts to have the charges dropped or nullified.

In a case known as the “bugging affair”, the prosecution alleges Sarkozy and his lawyer, Thierry Herzog, attempted to bribe a senior magistrate, Gilbert Azibert, to hand over secret information from a separate investigation against the former French leader. In return, Sarkozy is accused of offering to help secure Azibert a cushy job on the Côte d’Azur.

Sarkozy has been targeted in an array of legal investigations – from allegations of receiving illicit campaign funding from the late Libyan leader Muammar Gaddafi to receiving alleged kickbacks from arms sales to Pakistan.

French detectives began monitoring Sarkozy’s communications in September 2013 as part of an investigation into claims he had a received an undeclared and illegal €50m donation from Gaddafi to fund his successful 2007 presidential campaign.

Fabrice Arfi, a senior editor at the news website Mediapart, who has carried out several in-depth investigations into allegations of political corruption, told the Observer Sarkozy’s attempts to divert attention from himself and point the finger at the legal and political system were “pure populism”.

“This is an historic trial for justice in France as it is the first time a president will appear in court accused of corruption. It is absolutely crucial and probably the biggest test France’s anti-corruption judges have faced,” Arfi said.

“Sarkozy is on trial but, instead of responding to the accusations, what he has tried to do is point the finger at France’s justice system and put it on trial. Here we have a former president behaving like Berlusconi and Trump.”

Three of the suspects, who are between 13 and 14 years old, face charges of "complicity in a terrorist murder."

Four students have been charged over the killing of a Paris teacher last month, French media reported on Thursday.

In October, an Islamist terrorist murdered Samuel Paty and removed his head after the teacher showed his students cartoons of the Prophet Muhammad taken from the Charlie Hebdo satirical magazine.

Three of the suspects were reportedly accused of "complicity in a terrorist murder" by allegedly pointing Paty out to the killer. The three students are aged between 13 and 14 years old, French news agency AFP reported.

The fourth suspect is the daughter of the man who led an online campaign against the teacher, AFP reported. She has reportedly been charged with "slanderous denunciation" of Paty for relating her story of the civics lesson despite not attending the class.

The new suspects come in addition to the two other pupils who were charged earlier this month. Those two schoolchildren, aged 14 and 15, were indicted for "complicity in terrorist assassination" and placed under judicial supervision.

Justice authorities are now investigating 14 suspects in connection the crime, which is being treated as an act of Islamist extremism.

French President Emmanuel Macron has intensified a crackdown on Islamist activity in France since the incident, attracting criticism from the Muslim world.

Four French police officers have been suspended and are in custody after a video that shows them brutally beating a Black man was posted online Thursday.

The incident has provoked an outcry across France and comes as President Emmanuel Macron's government is trying to push through controversial legislation that would restrict the filming of police. Civic and journalist freedom groups oppose the bill, calling it a shield for brutality.

Michel Zecler, a 41-year-old music producer, was not wearing a face mask — required under current COVID-19 measures — when police officers saw him walking in Paris last Saturday. As he tried to enter his music studio, the police officers pushed him through the doorway and pummeled him repeatedly with their fists and a billy club.

The beating stopped when others in the building came to Zecler's aid, though police later threw a tear-gas canister through the window to force him to leave his studio and arrested Zecler and others.

The police were unaware they were being filmed by a surveillance camera.

The video was posted on social media by Loopsider, a French digital news outlet, and has been viewed more than 8 million times.

"I thought it was my last day," Zecler, wearing an arm sling, told Loopsider in an interview.

Zecler spent 48 hours in jail after officers accused him of violence, resisting arrest and trying to take their weapons.

The video shows Zecler is clearly overwhelmed, and Zecler's lawyer has told French media that a formal complaint has been filed against the police officers, who are also accused of fabricating evidence.