This is our lounge area. Feel free to come in and get acquainted!
1877 posts

“61% of people believe that “on the whole, jobs and wages have been made worse by technological change”.”

“When asked about different ways to run the country, 80% of people support “having experts, not government, make decisions according to what they think is best for the country” and 84% who favour “having a democratic political system”. ”

“Younger voters are most authoritarian. Among 25-34 year olds, 36% support army rule; 66% favour strongman leaders; and 26% believe democracy is a bad way to run the country. “

“Older voters are considerably more democratic. Among over-75 year olds, just 3% of over-75s believe democracy is bad. Among 65-74 year olds, fewer than half (48%) support strongman leaders and just one in ten (10%) people support army rule. “


I’m not sure where to start complaining about the idiocy.
Top

Of course such people are suckers for false promises of security, and can't do anything about it when they realize.

Is that really right? Maybe there's something weird about how the polling was done.
A fool thinks himself to be wise, but a wise man knows himself to be a fool.
William Shakespeare
Top

Some silly regulation about it not being part of the uniform? 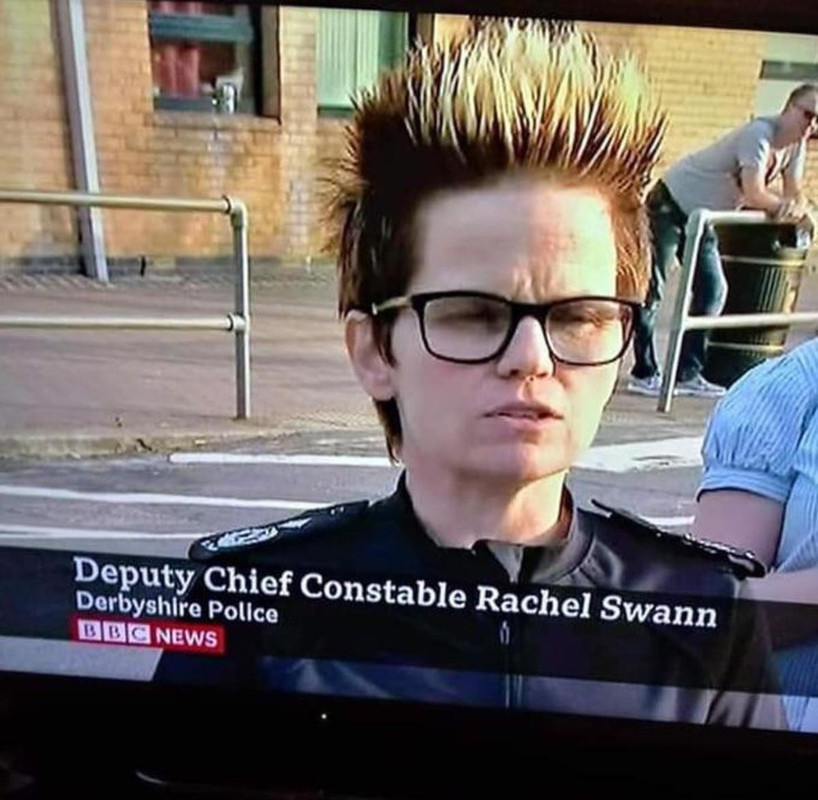 Say no to hair shaming.
Top

The chief constable never said to play with live wires before the interview. He just said that whoever talked to the news should have elocution running through them.
Top

Hint, a hat would complete the uniform.
Top

Yet they don't seem to flock to the military:

Data released by the Ministry of Defence under freedom of information laws shows the number of soldiers in the British army’s infantry regiments has declined steadily over the past five years. There are more than 2,500 fewer personnel in frontline units than 2015, and all 16 regular regiments are have shortfalls.

The figures have prompted criticism of the outsourcing company Capita, which signed a contract with the MoD to manage recruitment to the armed forces in 2012, for its “shambolic and chaotic” handling of the situation. The have also been calls for the defence secretary, Ben Wallace, to address the crisis urgently. [Nothing like privatization, uh?]

Publicly available data published quarterly by the MoD shows a 7.6% deficit in personnel across the army on 1 January 2019, but the figure masks a more dramatic shortfall in frontline troops.

But then, military rule needs just one dictator with enough medals on his 1 pretty uniform, right?

The Guardian comes to a belated realization:

“In the absence of a formal constitution, British democracy is heavily reliant on politicians acting with honour”

I guess we’ll have to see how that turns out.
Top

(Reuters) - British Prime Minister Boris Johnson has given support to the police’s “stop-and-search powers” and also pledged to create “another 10,000 spaces” in UK prisons.

“... I am announcing today that in all 43 police authorities in England and Wales, we are making clear that the police can and should make use of their stop-and-search powers”, he wrote in the Mail on Sunday, adding that such a step was needed to combat crime.

Johnson also wrote that Finance Minister Sajid Javid has agreed to spend up to 2.5 billion pounds ($3.01 billion) to create 10,000 additional spaces in prisons.

He insisted on tougher sentencing laws for “serious sexual and violent offenders”, as well as for those carrying knives.

This is perfectly acceptable because sexism and intolerance is fine providing it's coming from the far left.

You are a RACIST cis-hegemonic white supremacist if you think otherwise.

I will pray for you.

This is perfectly acceptable because sexism and intolerance is fine providing it's coming from the far left.

Children of British Isis members will not be allowed to return to UK, government rules

‘If these children are not returned to their country, rehabilitated and reintegrated into their communities, they will all become future terrorists,’ warn the Kurdish authorities

Children of British Isis members stranded in Syria will not be allowed to return to the UK, the government has reportedly decided.

At least 30 British children are currently being held with their mothers in camps in northern Syria, after being detained as they fled the crumbling Isis caliphate.

The government has been under pressure to bring them home from the dangerous and overcrowded camps, both from local Syrian authorities and from the Trump administration. Earlier this year the infant son of Shamima Begum, the teenager who fled her home in Bethnal Green to join Isis, died weeks after arriving at one of the facilities.

The former foreign secretary Jeremy Hunt had said following the death that the government was working with the then international development secretary, Penny Mordaunt, on whether the children could be safely returned.

But Sajid Javid, the former home secretary, concluded after a review that it would be too dangerous to send officials to retrieve the children from Syria, according to The Times – despite the camps being regularly visited by British aid workers and journalists.

A number of European countries have repatriated stranded children, however. France, Germany, Norway and Denmark have all brought a small number back, most of whom were orphans whose parents were killed during the caliphate’s final months. Australia also recently brought home eight children and grandchildren of two Australian nationals who fought for Isis.

Some 70,000 women and children who fled the Isis caliphate in its last months are being held in camps by the Syrian Democratic Forces (SDF), a mostly Kurdish militia that defeated the terror group with US and UK backing. The largest of those facilities is al-Hol camp, which is currently housing some 11,000 foreign citizens. The SDF is also holding some 800 European Isis fighters.

Are those things tentacles?
About that stereo
Top


I’m not sure where to start complaining about the idiocy.

Well, the government has sissified the population to such an extent this isn't terribly surprising.

I give you Neil "It doesn't bear thinking about" Tipping
https://www.dailymail.co.uk/news/articl ... -pond.html
About that stereo
Top
1877 posts