What's killing us this week?

Ever had it before? Well you got it again.
316 posts

– J. "Xenon!" D.
Mob of the Mean: Free beanie, cattle-prod and Charley Fan Club!
"Doctor X is just treating you the way he treats everyone--as subhuman crap too dumb to breathe in after you breathe out." – Don
DocX: FTW. – sparks
"Doctor X wins again." – Pyrrho
"Never sorry to make a racist Fucktard cry." – His Humble MagNIfIcence
"It was the criticisms of Doc X, actually, that let me see more clearly how far the hypocrisy had gone." – clarsct
"I'd leave it up to Doctor X who has been a benevolent tyrant so far." – Grammatron
"Indeed you are a river to your people.
Shit. That's going to end up in your sig." – Pyrrho
"Try a twelve step program and accept Doctor X as your High Power." – asthmatic camel
"just like Doc X said." – gnome

Interesting tweet, need to check, but I seem to recall most of these....

Every election year has a disease

Not too sure about Ebola in 2018, but the rest of them seem to be correct... interesting.
Then Skank Of America could start in...
Top

In Latin America, Dengue is deadlier than Coronavirus

In Latin America, not only is it more likely to get the dengue fever, but it is even more deadly than coronovirus, with a mortality rate as high as 20%, when left untreated.

The dengue fever outbreak in several Latin American countries is proving more dangerous and contagious than the coronavirus, a disease that is wreaking havoc worldwide.

More than 19 countries, including Bolivia, Panama, Brazil, Paraguay and Uruguay, are facing this disease that has taken thousands of human lives and continues to spread.

In Panama, two deaths and 1,012 confirmed cases have been reported so far in 2020. According to the Ministry of Health, 894 cases are not alarming, 112 are, and there are six serious cases.

The countries with the highest infection rates are in Central America. In Nicaragua there are approximately 2,271 cases per 100,000 inhabitants, in Belize 1,021, in Honduras 995 and in El Salvador 375, according to the Pan American Health Organization (PAHO).

According to local media, there have been eight deaths from hemorrhagic dengue fever in Honduras in 2020, and at least 8,737 infections. Of these, 75% have been children.

In the case of Bolivia, the situation is also alarming since 7,790 cases have been confirmed in seven of the nine departments of the Andean country. In addition, the Ministry of Health reported 42,000 suspected cases, most of them in the city of Santa Cruz.

There have been four Lassa fever outbreaks in the past five years in Nigeria.

As countries around the world struggle to contain the coronavirus, scientists are warning of a more deadly viral outbreak in Africa. The people of Nigeria are dealing with what may be the world’s largest epidemic of Lassa fever, a viral disease killing more people than coronavirus.

Lassa fever is a severe viral hemorrhagic fever similar to the Ebola virus that affects areas of Nigeria throughout the year. It was declared an “active outbreak” by the Nigeria Centre for Disease Control (NCDC) in February. The epidemic usually occurs during the annual dry season, but this year, it has already spread across more than half the country.

The virus spreads through humans via contact with food or household items contaminated with rat urine and feces. It also can spread from person to person through contact with the body fluids and organs of infected people.

According to the Centers for Disease Control and Prevention, the illness was discovered in 1969 and is named after the town in Nigeria where the first cases occurred. "An estimated 100,000 to 300,000 infections of Lassa fever occur annually, with approximately 5,000 deaths," according to the CDC. This year, the outbreak experienced an escalation in Nigeria that started in the second week of the year. By the end of the ninth week, the country had seen 775 cases and 132 deaths spread across 75% of Nigerian states.

Suddenly nobody cares
still working on Sophrosyne, but I will no doubt end up with Hubris
Top 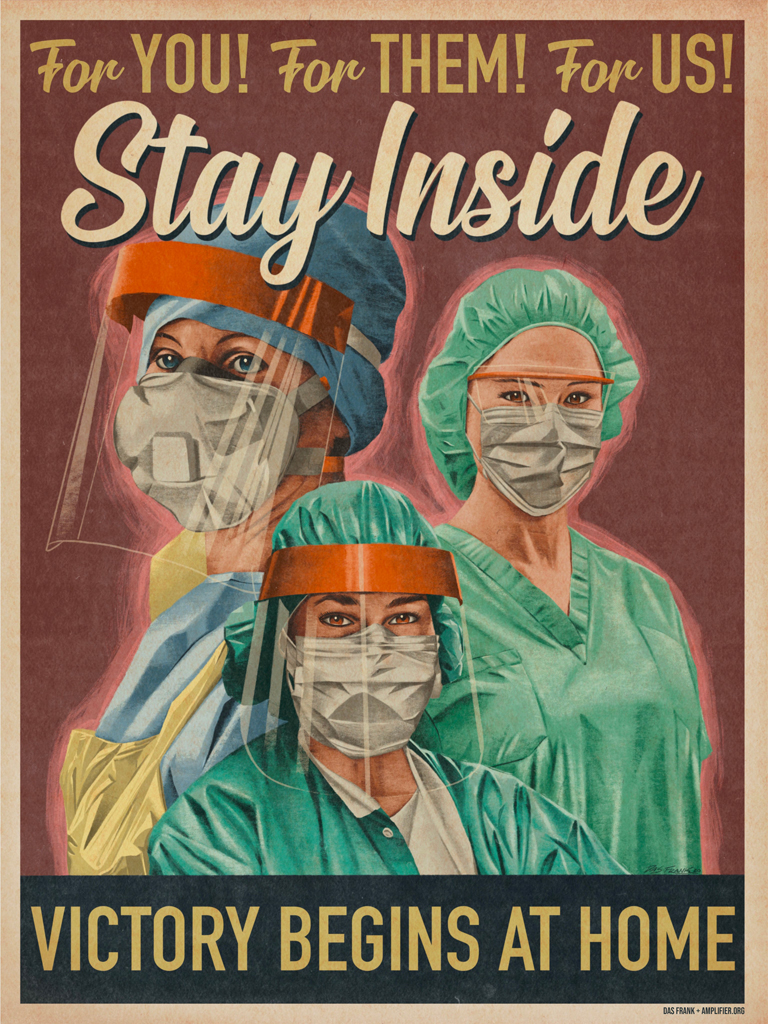 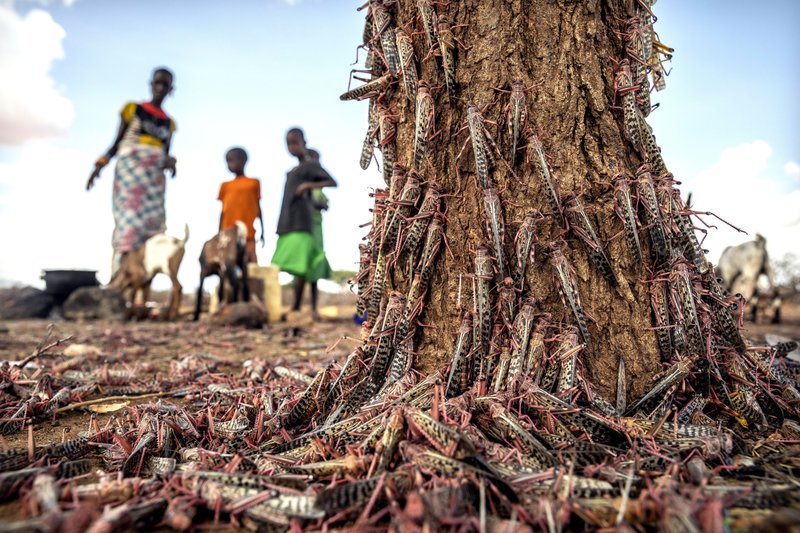 KAMPALA, Uganda (AP) — Weeks before the coronavirus spread through much of the world, parts of Africa were already threatened by another kind of plague, the biggest locust outbreak some countries had seen in 70 years.

Now the second wave of the voracious insects, some 20 times the size of the first, is arriving. Billions of the young desert locusts are winging in from breeding grounds in Somalia in search of fresh vegetation springing up with seasonal rains.

Millions of already vulnerable people are at risk. And as they gather to try to combat the locusts, often in vain, they risk spreading the virus — a topic that comes a distant second for many in rural areas.

Only thing we need to complete the series is wars and rumors of wars.
The flash of light you saw in the sky was not a UFO. Swamp gas from a weather balloon was trapped in a thermal pocket and reflected the light from Venus.
Top

However, the rivers of blood are only a metaphor.

Because of soil depletion, crops grown decades ago were much richer in vitamins and minerals than the varieties most of us get today

It would be overkill to say that the carrot you eat today has very little nutrition in it—especially compared to some of the other less healthy foods you likely also eat—but it is true that fruits and vegetables grown decades ago were much richer in vitamins and minerals than the varieties most of us get today. The main culprit in this disturbing nutritional trend is soil depletion: Modern intensive agricultural methods have stripped increasing amounts of nutrients from the soil in which the food we eat grows. Sadly, each successive generation of fast-growing, pest-resistant carrot is truly less good for you than the one before.

A landmark study on the topic by Donald Davis and his team of researchers from the University of Texas (UT) at Austin’s Department of Chemistry and Biochemistry was published in December 2004 in the Journal of the American College of Nutrition. They studied U.S. Department of Agriculture nutritional data from both 1950 and 1999 for 43 different vegetables and fruits, finding “reliable declines” in the amount of protein, calcium, phosphorus, iron, riboflavin (vitamin B2) and vitamin C over the past half century. Davis and his colleagues chalk up this declining nutritional content to the preponderance of agricultural practices designed to improve traits (size, growth rate, pest resistance) other than nutrition.

“Efforts to breed new varieties of crops that provide greater yield, pest resistance and climate adaptability have allowed crops to grow bigger and more rapidly,” reported Davis, “but their ability to manufacture or uptake nutrients has not kept pace with their rapid growth.” There have likely been declines in other nutrients, too, he said, such as magnesium, zinc and vitamins B-6 and E, but they were not studied in 1950 and more research is needed to find out how much less we are getting of these key vitamins and minerals.

Rock dust
still working on Sophrosyne, but I will no doubt end up with Hubris
Top

...
There have likely been declines in other nutrients, too, he said, such as magnesium, zinc and vitamins B-6 and E, but they were not studied in 1950 and more research is needed to find out how much less we are getting of these key vitamins and minerals.

They need more data to support their foregone conclusion.

Perhaps they should partner with their economics department and find out if the greater* availability and lower* cost of said items makes it all a practical wash!

*See, I have my own foregone conclusions!
Top

Doctors in Vietnam this week say that they’ve made a mysterious and—if accurate—alarming discovery: A local resident who was infested with the nearly extinct Guinea worm. But Guinea worm experts are still trying to confirm whether this case is the genuine article, and if so, how the worm managed to reach a country thousands of miles away from its only known remaining refuge in parts of Africa.

The Guinea worm, formally known as Dracunculus medinensis, is an ancient parasite possibly referenced as far back as the Bible and named after the African region where European explorers in the 17th century first reported seeing it. It’s a nematode that explicitly relies on people as part of its cringe-inducing life cycle.

The worm usually infects people through drinking water contaminated with tiny freshwater crustaceans that have eaten worm larvae. When these first hosts die, the worms break free and penetrate into the abdomen from the intestinal wall, where they grow up into full-fledged adults and get to mating.

When the mama worm (which are much longer than male worms and can extend up to 2.5 feet or 80 centimeters in length) is ready to deliver her progeny, she migrates to just below the surface of the skin, usually along our legs and feet. Then she very painfully breaks through the skin, causing a tremendous burning sensation that makes its hosts desperate to cool off at the nearest water source. As soon that happens, the mother squirts out her clutch of larvae into the water, where the very disturbing cycle starts again. From infestation to being a worm baby surrogate, the process can take a year’s time. But it can still take several painful weeks after for the original worm—or worms—to be removed, which can leave people at risk for other infections and disabled for months.

As recently as the 1980s, the Guinea worm was commonly found in tropical and subtropical areas of Africa and Asia, and infected millions of people in Africa alone annually. But a decades-long eradication program has steadily beat back the worm to only a handful of countries and cases in Africa every year. Though these eradication efforts have taken a stumble as of late, with the discovery that the worm can also routinely infect dogs as well as humans, the worm is still expected to be wiped off the face of the Earth by 2030. That makes the potential case in Vietnam all the more baffling and concerning.

Hard to believe there's a parasite worse than Trump.
"It is not I who is mad! It is I who is crazy!" -- Ren Hoek

still working on Sophrosyne, but I will no doubt end up with Hubris
Top
316 posts