Ever had it before? Well you got it again.
28 posts

Link: https://twitter.com/Gizmodo/status/1136585123900604416
The flash of light you saw in the sky was not a UFO. Swamp gas from a weather balloon was trapped in a thermal pocket and reflected the light from Venus.
Top

Fuck. Just fuck.
You can lead them to knowledge, but you can't make them think.
Top

It really is nuts. It really infuriates me. They are literally taking advantage of sick people.

The government is legally prohibited from negotiating drug prices.

The United States is the only country in the world that does this, apparently. So a drug that costs $8/month in Australia costs $2000 in

. But your insurance will pay for it, so why do you care, right? Because that's what drives up everyone's insurance premiums including your own.

On my way to work this morning I was listening to a podcast about another case.

This Drug Could End H.I.V. Why Hasn’t It?

A solution to the AIDS epidemic may be at hand. But not everyone who needs it has access to it. June 5, 2019

Truvada, a drug manufactured by Gilead Sciences, is taken once daily to prevent infection with H.I.V. It currently costs about $20,000 annually.

Could it wipe out the disease like small pox? Maybe not entirely, but it could, if everyone who was "at risk" for HIV took it, probably cut down on new infections by about 90%. But, it's more important for the company that makes the drug to maximize their profits than to wipe out a deadly disease, so here we are. It'll supposedly be coming off patent in 2020 but the company is making a new, slightly different version of the drug which they claim causes fewer side effects, so it's a little unclear whether cheap generic versions of the old drug will still be the drug of choice after it comes off of patent.

Essentially, Americans pay huge markups for drugs that are available to people in other countries for a bargain.

Or is it Americans (or their insurance companies) paying the true cost, as distinct from government subsidy?

Note this is not a definitive libertarian argument against the subsidy, just a reminder that the Magic Cargo Theory of Value is false.

Abdul Alhazred wrote: ↑Fri Jun 07, 2019 11:55 am Or is it Americans (or their insurance companies) paying the true cost, as distinct from government subsidy?

No. A drug that was being sold for $40 in 2000 is now almost 1000 times more expensive. True cost has nothing to do with it.
A fool thinks himself to be wise, but a wise man knows himself to be a fool.
William Shakespeare
Top

What's not clear from the tweet is that the DOJ is going after them.

The pharmaceutical company responsible for one of the largest drug price increases in US history "knowingly paid illegal kickbacks" as part of an elaborate scheme to make millions and stick the American taxpayer with the bill, the US Department of Justice said Wednesday in a lawsuit filed against Mallinckrodt Pharmaceuticals.

In its complaint, the government demanded a jury trial that would put front and center the actions of the company at the heart of a 97,000% drug price hike. The price of Mallinckrodt's anti-inflammatory drug Acthar -- best known for treating babies with a debilitating seizure disorder -- has gone from $40 a vial in 2000 to nearly $39,000 today.
The complaint was filed in the US District Court for the Eastern District of Pennsylvania by US Attorney William McSwain. Mallinckrodt could face fines of nearly $240 million if found liable.

Short Story: they set up a fund wherein you could get the medication for free if you were uninsured. In turn, they only charged Medicare the 40K price.

On the other hand, this drug is the only thing on the market that works BUT it is a dangerous drug and there are likely hundreds of pending lawsuits.
Spoiler: 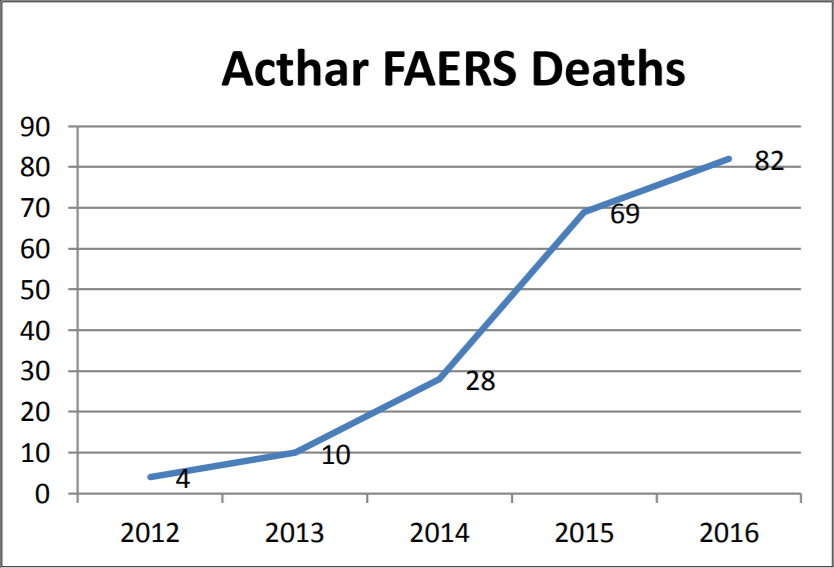 https://citronresearch.com/fda-faers-da ... se-events/
They have to raise the price to cover the costs!

That will be their argument, anyway.

On the gripping hand, the huge increase in deaths appears to be them lobbying doctors to provide the drug for off-label uses.
Last edited by Rob Lister on Fri Jun 07, 2019 12:36 pm, edited 3 times in total.
Top

So while it's not stinging the consumer directly, it's stealing from everybody (via a government program) including from those who do not need the drug.

So the libertarian argument still might be somewhat cogent, but I think first we need some guillotines.

Some additional observations:
1) Private insurance companies would not put up with that shit.

2) Who thought up the rule that the government cannot negotiate price, and what rationale?
Was it merely corrupt drug company logrolling, or was there some sort of regulatory incompetent do-good-ism?

I'd say that's not entirely true. Even with private insurance companies, the government is involved. Often they have no choice but to put up with it. Then instead of saving money on the cost side of the equation, they just have to raise prices (premiums) for everyone to cover the increased cost. This is why inflation is much higher in the health care sector than in, say, consumer goods.

As for your second question, it's the pharmaceutical industry. They lobby congress, they donate generously to their reelection campaigns. Maybe they even hire family members of congress people. I'm sure you know all about how political influence works.
A fool thinks himself to be wise, but a wise man knows himself to be a fool.
William Shakespeare
Top

So a political corruption story more than anything else.

Abdul Alhazred wrote: ↑Sat Jun 08, 2019 4:39 am So a political corruption story more than anything else.

I was on my phone earlier, but here's some more information;


The Medicare Prescription Drug, Improvement, and Modernization Act,[1] also called the Medicare Modernization Act or MMA, is a federal law of the United States, enacted in 2003.[2] It produced the largest overhaul of Medicare in the public health program's 38-year history.

The MMA was signed by President George W. Bush on December 8, 2003, after passing in Congress by a close margin.[3]

The MMA's most touted feature is the introduction of an entitlement benefit for prescription drugs, through tax breaks and subsidies.

In the years since Medicare's creation in 1965, the role of prescription drugs in patient care has significantly increased. As new and expensive drugs have come into use, patients, particularly senior citizens at whom Medicare was targeted, have found prescriptions harder to afford. The MMA was designed to address this problem.

The benefit is funded in a complex way, reflecting diverse priorities of lobbyists and constituencies.

It provides a subsidy for large employers to discourage them from eliminating private prescription coverage to retired workers (a key AARP goal);
It prohibits the federal government from negotiating discounts with drug companies;
It prevents the government from establishing a formulary, but does not prevent private providers such as HMOs from doing so.

According to the New York Times December 17, 2004 editorial W.J."Billy" Tauzin, the Louisiana Republican who chaired the Energy and Commerce Committee from 2001 until February 4, 2004 was one of the chief architects of the new Medicare law.[6][7] In 2004 Tauzin was appointed as chief lobbyist for the Pharmaceutical Research and Manufacturers of America (PhRMA), the trade association and lobby group for the drug industry with a "rumored salary of $2 million a year,"[6] drawing criticism from Public Citizen, the consumer advocacy group. They claimed that Tauzin "may have been negotiating for the lobbying job while writing the Medicare legislation."[7][8] Tauzin was responsible for including a provision that prohibited Medicare from negotiating prices with drug companies.[9]

There you have it. A congressman who chaired a key committee and "was one of the chief architects" of the law, retired and was then hired as a lobbyist by the pharmaceutical industry for $2 million/year (rumored). Who knows, really. Whether you call it "corruption" or just "money influences politics," the result is the same.

The fact that the federal government is prohibited by the law from negotiating discounts with drug companies makes no sense from the government's (taxpayers') perspective. It only makes sense if you are a pharmaceutical company.
A fool thinks himself to be wise, but a wise man knows himself to be a fool.
William Shakespeare
Top

Fuck you, pay me!
Top

Now get to work.
Get the wax outta your ears!

You call the Captain "Captain!"

And you call the rest of us "Boss," you hear?!
Top

I got a crew what does that.
Top

Got their mind right?
Get the wax outta your ears!

You call the Captain "Captain!"

And you call the rest of us "Boss," you hear?!
Top

Them that doesn't, oh you won't see them no more.
Top

They got everything there! Over on the boulevard.
You trying to be a wiseguy with me?
Top

Cannoli? A million bulls are watching us and you guys are sucking down espresso and cannoli over on the boulevard. You guys gotta start eating sangwiches. Like I told Vinnie.
Top
28 posts