Also: Anyone else messing with poker these days?

gnome wrote:Interesting--so that little window is ostensibly a separate business willing to buy the medals?

I think that's the legal fiction. It's legally a separate business entity.

I don't know the legal details, but that's what I assume. And I guess they just "sell" the little prizes back to the pachinko parlor.
A fool thinks himself to be wise, but a wise man knows himself to be a fool.
William Shakespeare
Top

Thinking about this I was sort of rereading what was said about AlphaZero.

Some folks think that google cheated by limiting the amount of 'think' space former programs had. Wiki sez that google may be a little political in that it did not give other versions a fair set of resources.

That's possible. I'd like to think they 'do no evil' but I'd be pretty retro in thinking that. They're now competing against themselves. I'm pretty sure they're going to win. Other than IBM, nobody is playing this game. And they are not playing GO. Or poker. Or even Chess, anymore.

Thunking, I is. It doesn't change my opinion about poker bots though. Even a simple one can beat me. Maybe if I figure out it is a bot I might, maybe, be able to beat it. But by that time I'm out of chips.

That *online* game is done.

I would like to sit in front of RCC. With Coolhand (rip) at his left. Playing small stakes and no-holdem', I'd do okay. Maybe not every night, but at least one night in four. Those are the nights I'm sober. And if they take me for all 20 of my dollars ... I'm good with that.
Top

The chess thing did involve some serious conditions that weakened stockfish, but as I understand it stockfish was still running at a level where it would have beaten any human being. Chess programs are way, way beyond humans at this point. Improving a chess engine at this point is an engineering challenge. As a resource for humans to improve at chess the ceiling has already been hit.

The poker bot thing is interesting. The main use of a bot to this point in most of the games is that it allows for insane volume, and if the side has a substantial bonus program, a bot can be useful. The downside is that using a bot isn't that awfully hard to detect and it will result in the site taking your money and banning you. That is assuming the site gives a shit. Bots pay rake.

Computers have solved limit holdem and do really well at heads up no-limit, but as far as I know not all that awesome at anything else. Well enough to do OK in the smaller games, but it isn't like chess where you get blown off the board. Really, the only functional difference between a reasonably skilled human that plays 24 tables and a bot is that one of them is made out of meat.

Unlike chess, poker is a game of limited information, and probably more important, a game where a, and I hate this phrase, "game theory optimal" approach is usually less effective than an exploitative strategy in a multiplayer game with weak players in it.

The idea of GTO is a balanced strategy that, even if the opponents know what it is, they can't exploit it. An exploitative player deviates from the balanced strategy when doing so creates a greater advantage over a specific opponent. Since that opponent has a finite amount of chips to lose (especially in a tournament), being exploitative can be a great advantage.

Of course, one can exploit the exploiter, which is why doing that stuff is insanely complicated. Moreso in some tournament conditions where the value of the chips is itself variable.

I'm sure at some point a computer will do all this better than any human. I wasn't so sure it would be anytime soon, but if this is a totally different approach, maybe sooner than I thought.
Top

Interesting read on how Libratus beat the pros.
Top

Interesting read on how Libratus beat the pros.

In the scheme of things, it just meant a team of nerds with a supercomputer developed a strategy that beat an assorted number of nerds that developed a strategy with lesser computers at heads up NLHE w/ fixed stack levels. To be fair, the stacks were fixed at 200 big blinds, which is pretty deep and far more impressive than had the stacks been something like 50bbs.

Elite heads up NLHE is barely more than meat robots analyzing data trying to find an optimal solution. The best at it generally wind up having to quit because they can't get action, so progress as to developing strategy gets slowed down a bit.
Top

It just occurred to me that ICM is a good basis for an argument for progressive taxation. The idea that context can make the value of currency variable by expressing it in terms of practical utility.
Top

Game theory and politics make interesting reading.
"If fighting is sure to result in victory, then you must fight! Sun Tzu said that, and I'd say he knows a little bit more about fighting than you do, pal, because he invented it, and then he perfected it so that no living man could best him in the ring of honor. Then, he used his fight money to buy two of every animal on earth, and then he herded them onto a boat, and then he beat the crap out of every single one. And from that day forward any time a bunch of animals are together in one place it's called a zoo! (Beat) Unless it's a farm!"
--Soldier, TF2
Top

It is too bad poker is tied up with the idea that it has to be gambling. Learning to play the game at anywhere near a high level involves so many skills and concepts applicable to other areas of life that it would make an excellent game to teach children.
Top

I've been feeding my poker jones by watching clips on Youtube. Which is not at all satisfying, but it has had an upside: I now know the name Stu Unger, and am kind of in awe of him.

Too bad he was one of those flame-that-burns-twice-as-bright people.
"I can't tell if this is a love-fest or a pissing contest."
--MLynn

Beleth wrote:I've been feeding my poker jones by watching clips on Youtube. Which is not at all satisfying, but it has had an upside: I now know the name Stu Unger, and am kind of in awe of him.

Too bad he was one of those flame-that-burns-twice-as-bright people.

He had the fortune of living in an era when talent mattered more because there was little or no good theory as to tournament no-limit holdem. People were really banging rocks together back then, in part because those tournaments were rare. He figured out the value of selective aggression against people who were a bit too concerned with survival, and had the card instincts to pull it off. As a result his win % in big no-limit tournaments was absurd even before considering the effects of his drug problems.

These days the understanding of the game at the elite level is such that nobody is going to dominate it with those talents. This would be a really bad era for him. The skills he used in tournaments didn't translate into other forms of poker (he was considered a donor in the big cash games back then), so it would be unlikely he would take the time to plug the leaks he's have to plug to be viable today...

It would have been very interesting had he lived to see how the poker boom would have effected his life and legacy. I doubt it would have went well.
Top

Stones Gambling Hall, the California cardroom at the center of a possible poker cheating scandal, has been named in a $30 million lawsuit brought by 24 players who believe they have been financially harmed by the alleged scam. Also named is Mike Postle, the player who plaintiffs believe was relayed information about their hole cards during a series of Stone Live Poker cash game streams by person or persons unnamed.

Here's the short-long of it. These games use cards that have RFID chips that relay the face and suit of the hole cards to RFID readers at each seat at the table. This data, in turn, is relayed to a control room that shows the hands to the audience, but on time delay. The theory is that Mike Postle had someone inside the control room relaying the hole cards to his phone. But how to prove it?

potripper is the notorious cheat that worked as a consultant for Absolute Poker back in 2007. He was a superuser that could see the hole cards. Mike is even better than him. The chances of Make not cheating are zero.
Top

Why couldn't the chip be read across the room?
This space for let
Top

Very limited range, on the order of millimeters. At each seat position at the table, hidden under the felt, there is a reader about the size of a sheet of paper. The readers are connected to a hub and the hub unloads to a server. All encrypted. 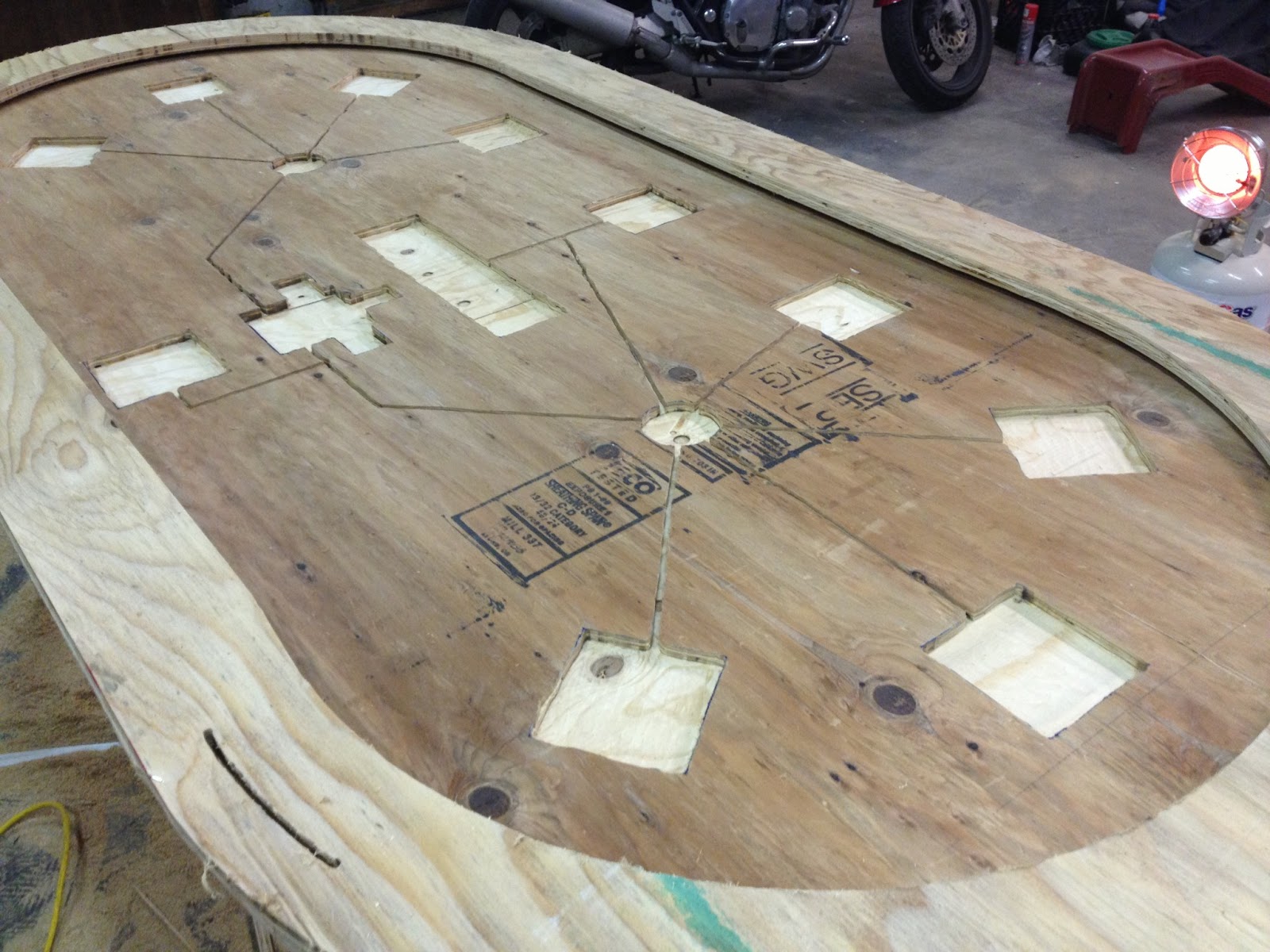 But the range. The tag is passive probably. So zap it and pick up the result with a sensitive directional antenna? why mm?

Seems eminently hackable. Even to a non-russian like me.
This space for let
Top

But the range. The tag is passive probably. So zap it and pick up the result with a sensitive directional antenna? why mm?

Seems eminently hackable. Even to a non-russian like me.

That may be possible but this appears to be an inside job with the guy in the control room as well as the company president, maybe.
Top
35 posts • Page 1 of 1