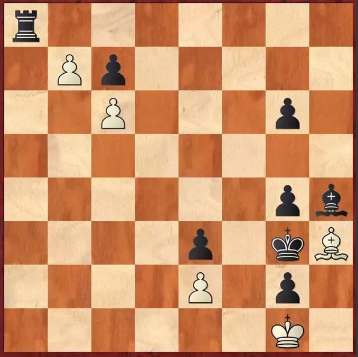 Before looking at the spoilers, my first thought was to take that rook with the white pawn, promoting to queen.

Second choice is take that pawn between the kings with the bishop. After that, it depends on what black's next move is.

I admit I'm not very good at this game, and the most obvious moves are probably wrong.
A fool thinks himself to be wise, but a wise man knows himself to be a fool.
William Shakespeare
Top

Been watching some more videos.

The world chess championship (human division) is underway right now between the top 2 human players in the world. So far they've played 8 games and they've all ended in draws. This is the 8th game:

The American player, Caruana, missed a good move in the middle that might have led to a victory.

Watching this video made me realize how much human chessplay is now influenced by AI chessplay. The best chess players in the world are now computer programs, and even the best human player would likely lose to any of them. But they can use these programs to practice, hone their skills, and even probably get ideas from. They can go back to their past games and analyze any position with an algorithm and see what the computer would have done, and, if their memory is good, remember it for the future. Sometimes the value of a particular move doesn't become apparent until a few moves later.

Anyway, this guy seems to be pretty good at analyzing the various positions.

Here's his analysis of a match between two computer programs, both of which are rated higher than the highest rated human player:

Leela Chess Zero demolishes her opponent here. She has some cool avatars you can search for.


Leela Chess Zero is a free and open-source chess engine and distributed computing project. Development has been spearheaded by programmer Gary Linscott, who is also a developer for the Stockfish chess engine. Leela Chess Zero was adapted from the Leela Zero Go engine,[1] which in turn was based on Google's AlphaGo Zero project,[2] also to verify the methods in the AlphaZero paper as applied to the game of chess.

Like Leela Zero and AlphaGo Zero, Leela Chess Zero only knows the basic rules and nothing more.[1] Leela Chess Zero is trained by a distributed computing network coordinated at the Leela Chess Zero website. As of August 2018, it had trained itself by playing over 23 million games of chess against itself.[1]

I think there's a difference between a "chess engine" like Stockfish and an "AI" like Leela Chess Zero. But that's sort of beyond me to explain better than Wikipedia can. The latter seem to have surpassed the former though.

Here's another youtuber talking about her:

Don't you just love living in The Future?

Don't you just love living in The Future?

It's kinda cool. I wonder what other things AI will be able to do in my lifetime.

Chess is neat, but ultimately it's just a game after all.

ETA: Oh yeah, I almost wrote "the top two players in the world" but I decided that needed to be qualified to be strictly accurate.
A fool thinks himself to be wise, but a wise man knows himself to be a fool.
William Shakespeare
Top

Prawn to King four.
"If fighting is sure to result in victory, then you must fight! Sun Tzu said that, and I'd say he knows a little bit more about fighting than you do, pal, because he invented it, and then he perfected it so that no living man could best him in the ring of honor. Then, he used his fight money to buy two of every animal on earth, and then he herded them onto a boat, and then he beat the crap out of every single one. And from that day forward any time a bunch of animals are together in one place it's called a zoo! (Beat) Unless it's a farm!"
--Soldier, TF2
Top

I gotta root for Caruana 'cause he's 'Merican! Kinda.
Top

10 broke the old record for draws.

12 is the last game. if that's a draw they go into timed playoffs. Carlson is favored but Caruana doesn't know why.
Top

Pundits swear Caruana will lose in blitz so he has to win here.

This is so exciting I almost couldn't nap.
Top

The game is utterly even but time is now a huge factor. Caruana is going to lose unless Carlson gets locked up with a bsod. 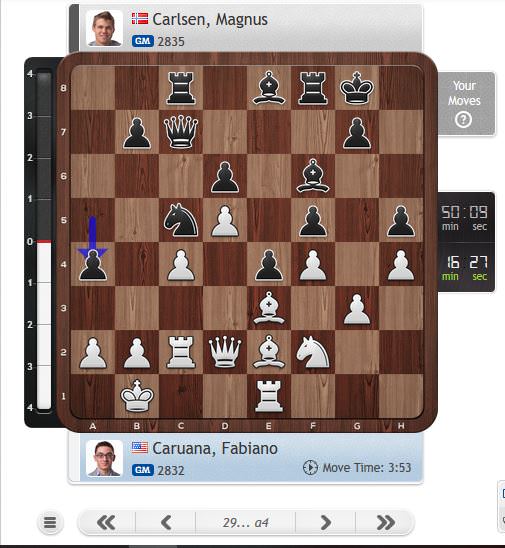 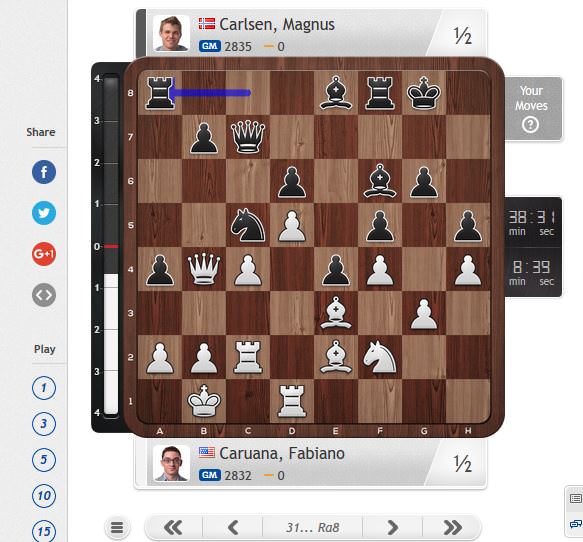 They agreed to a draw!fucking11eleventy.

This is a sad day for chess.

There is somebody or other's conjecture (not mine) that two perfect players will always draw.

Abdul Alhazred wrote: ↑
Mon Nov 26, 2018 6:40 pm
There is somebody or other's conjecture (not mine) that two perfect players will always draw.

I don't know but I don't see how it could be otherwise. But that assumes they actually PLAY TO THE END.

As with champions winning by the opponent "resigning", playing to the end is really not necessary when you are hot enough shit.

I think it's ridiculous to decide a world championship with speed chess. However, with the skills of today's world class players, a 24 game match at 40/150 time control would probably have 22 draws.

I was in NYC in 1995 to see some of the games in the PCA World Championship match between Kasparov and Anand at the WTC. Spent quite a bit of money watching nothing but draws.

Carlsen is better than Kasparov was at his peak, but that's due to the level of preparation available today.
"It is not I who is mad! It is I who is crazy!" -- Ren Hoek

I agree. But they both opted for that with this draw.


Carlsen is better than Kasparov was at his peak,...

but that's due to the level of preparation available today.

KASPAROV wrote: In light of this shocking draw offer from Magnus in a superior position with more time, I reconsider my evaluation of him being the favorite in rapids. Tiebreaks require tremendous nerves and he seems to be losing his.

Also, a blast from the not too distant past.


As a bonus, agadmator provides his analysis.
He Who Dares, Wins

I was avoiding this thread until I could watch for myself to avoid spoilers. I do question why Carlson offered a draw in that situation with his opponent under time pressure. It was not one of those situations that was clearly headed to a draw anyway.

I guess on the bright side it means that there will be more chess. Like a football game that goes to overtime, the fans get more football for the same price.
A fool thinks himself to be wise, but a wise man knows himself to be a fool.
William Shakespeare
Top
109 posts