The Luger is probably the most iconic firearm in the world. Maybe the AK is catching up but I'd wager that if you did a properly constructed test subjects would pick the Luger profile as being most recognizable. It is also one of those things that I think of as masterpieces of design. They are what they purport to do. You pick up a Luger it just points at the target.

Small digression. This is a model 1860 US Cavalry Saber If you pick it up, even a pansy assed snowflake, you immediately look for something to swipe. True fact, masterpiece of design.

Now, to collect Lugers is to fall into the Rabbit Hole. I have heard that you would need a collection of ~500 individual specimens to have all of the common Luger variations. I have around 25 books on the subject and my library is that of an interested amateur. I own around 15 Lugers and don't consider myself a collector of them, I simply "own some Lugers". Incidentally, these are definitively "Weapons of War" (the new snowflake buzzword) so would be, in a snowflake brave new world, taken away and melted down or something.

Among the many different Lugers there is a rare bird that might be referred to as the "Test Luger". I made that up since I don't know if there is actually a collectors designation for these things. They have, on the top of the weapon over the chamber (the place that accepts the cartridge for firing), a peculiar stamp. It looks like this:

download (3)a.png
The stamps are (L to R) the odd "Ub", the date and the last two digits of the serial number. Military Lugers were marked with the attention to completeness that one would expect from the bloody Germans, that is to say on every piece

. Oh, note the faint "halo" around the "59". That occurs when a stamp is applied AFTER the metal is blued. The stamping forces the metal to flow up and around as it were, thus spreading the blueing out, thinning it and making it lighter thus creating the halo. Note that the date shows no halo. That means that the date was stamped BEFORE final finishing. This is important. Why? Because Lugers are faked regularly and with devious intent. I've had 5 of the critters who were not as represented. It happens. The many marks on a Luger are applied at different stages of the manufacturing process. No Halo = Fake (if a halo should be there. The problem is that Lugers, to quote my old pal TE Lawrence, are "a series of exceptions to some unrecoverable rule".

Now that "Ub" stamp evidentially (always remember Lawrence when discussing Lugers) means Ubungswaffe, German for training/practice weapon. The thinking is/was that such weapons were available for shooting practice in the factory (Lugers had to be shot for accuracy before they would pass final inspection) or as examples of how the pieces fit to together and how the thing functions as an aid during assembly. There are some (one? two?) examples that have a hole on the top of the barrel for pressure testing. These have an additional "A" stamp on the barrel. "A" for Ausschuss (scrap or reject). How many of these "Ub" Lugers exist? Dunno. 10 maybe. 25? Not a lot.

Lugers tend to be sorta valuable. A dealer friend once told me that if I come across any Luger in decent shape for less than $1,000, buy it. He was/is right. Lugers, being Iconic, hold their value and appreciate. So when I came across a decent looking example at a show recently that was priced at $750 I, after a cursory examination, bought it. We collectors Luger owners amass what we refer to as "shooters". Pistols that are not of collectible quality (lousy finish, mismatched serial numbers etc.) that we can shoot without fear of damaging something that has an irreplaceable part. This Orwellian logic allows us to keep acquiring Lugers without adding to our collection. See?

Anyway, I got the thing home and took it apart (digression. When my son was around 10 or so I taught him how to take a Luger apart and then reassemble it. I told him that he was one of the very few 10 year olds who could do so. Thus it was an accomplishment and worthy of inclusion on his CV) and tried to figure out what it was.

Long (long long long) story short. The damn thing was what is referred to as a VOPO (Volkspolizei = East German Police) rework of a 1935 Mauser Luger. Rework = replacing worn/missing parts, restamping serial numbers so they all match (this is Germany remember), re-bluing and so forth and so on. There is one stamp that confirms this. Viz.
download (6).jpg
This is not from my pistol, the stamp on mine is far less distinct.

OK. So now we have a marginally collectable VOPO pistol. The really interesting thing is that on the chamber there is stamped a "U"
smaller.jpg
A "U", the same "U" as the "Ub" U but no "b". It is serif unlike the sans-serif of the other mark but remember Lawrence.
Clearly a factory mark. The only one that I have been able to find anywhere, including querying some major collectors and experts.
The "G" is a date code for 1935. See, the clever and devious Germans stamped Lugers with codes for date and manufacturer thus evading the repercussions of violating the Versailles Treaty. I know it is silly.

So, what is it? No idea. Was it some sort of "Test" Luger in the VOPO factory? Was it a test Luger during the Nazi era that was repurposed by the VOPO?

Thing is that it still has NAZI proofs on the barrel which would not have been the case if it was a test Luger during the NAZI era. Test Lugers were not proofed since they were not going into service. That suggests that this was a service weapon that was captured (along with millions of others) and THEN stamped and pressed into some sort of testing role. Maybe. Remember L.
You do not have the required permissions to view the files attached to this post.
About that stereo
Top

You really don't have to apologize for digressions.
... The stars were suns, but so far away they were just little points of light ... The scale of the universe suddenly opened up to me. It was a kind of religious experience. There was a magnificence to it, a grandeur, a scale which has never left me. Never ever left me.
Carl Sagan
Top

My life has been a digression.
About that stereo
Top 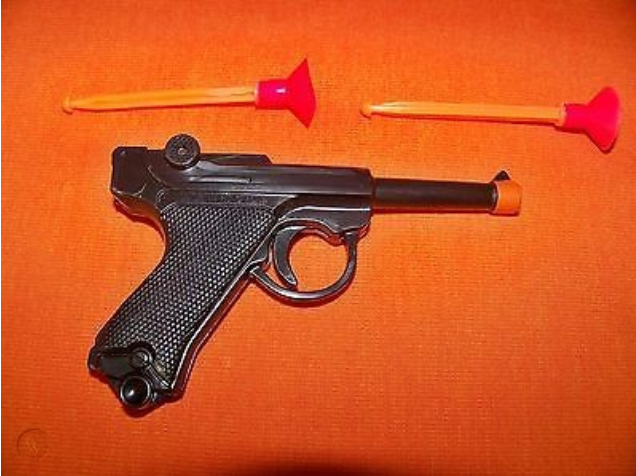 Yeah I know about Lugers. Like the Luger Mini-14, am I right?

I am not a gun guy, but if I WERE to start collecting guns, I'd want to start with Lugers and broom-handle Mausers. Just because they are such unique looking specimens. Most revolvers look roughly alike, to me at least. Most handguns also look pretty similar to my (admittedly untrained) eye. L shaped boxes of various sizes, essentially. Lugers and Mausers are exceptions, they look cool.

I did come across a reference elsewhere to a WWII era Japanese handgun called a Nambu. It looks a lot like a Luger. I have always wondered if that was intentional. 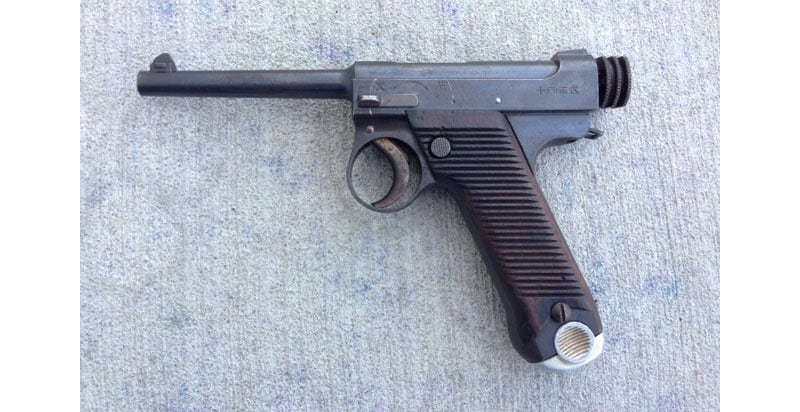 I agree re. revolvers. Thing is that they don't jam. I sometimes carry this 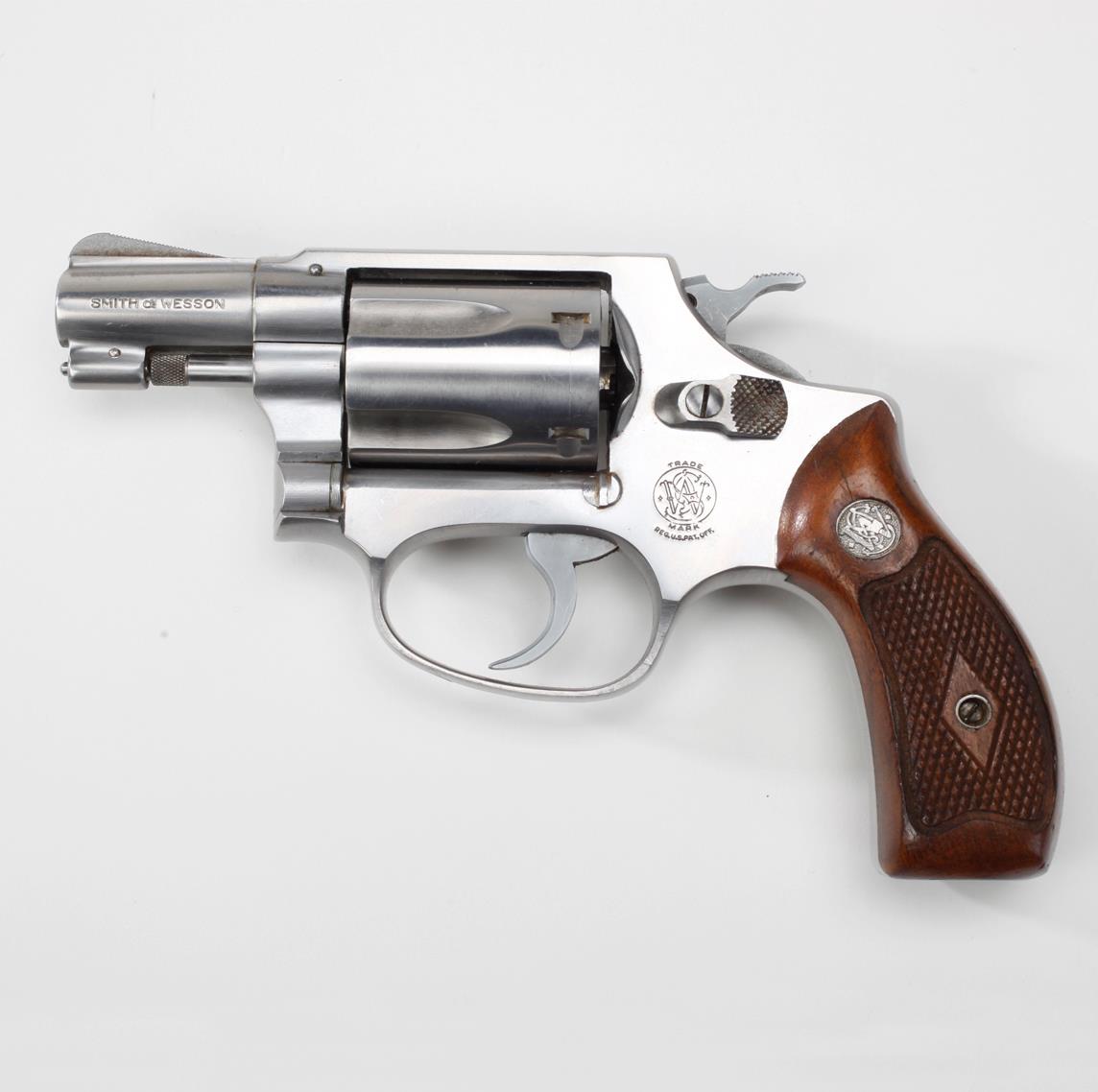 or the airweight version (frame is alloy/aluminum).

I never understood why any automatic pistol had anything other than the raked back ergonomic grip. Even the c96 is very awkward, it is round. Like a, wait for it, broomhandle.

I think that the japs observed german developments and came up with an improvement (in their eyes) to the Luger. Personally, the cocking device on the Nambu is superior to the toggle thing on the luger, probably cheaper to turn out too. 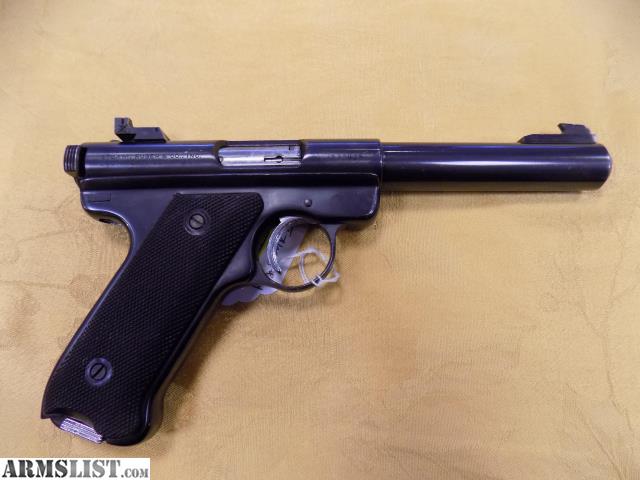 Feels like a luger but you can shoot it all day for a few bucks. I see them regularly at shows. Figure <$300. Maybe a lot less if you buy one that is "distressed" (bluing fucked up, cosmetic problems etc). I bought a High Standard .22 that was someones knockabout gun for $225. I keep it handy in case anything questionable emerges from lake ed .

You should get something. Just to fool around.
About that stereo
Top 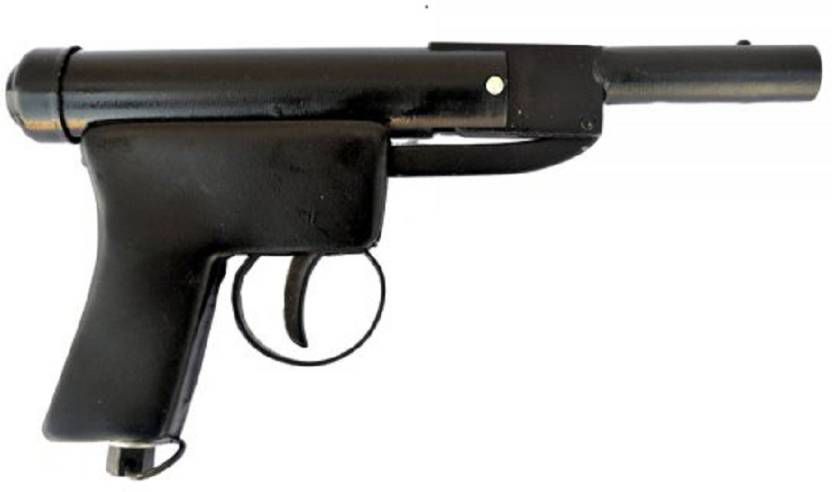 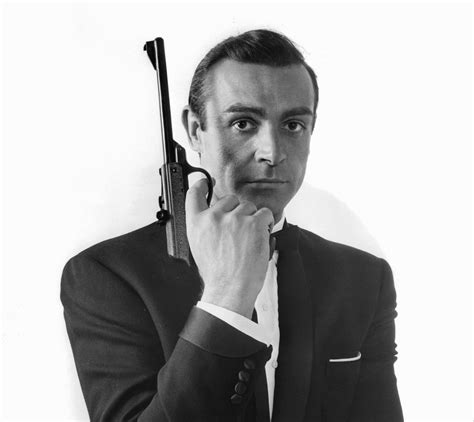 It is. (Some crappy Indian thing.)

I have a Ruger MkII, bull barrel target model. Great shooter and I can even take it apart and put it back together without referring to the manual now.

If you've ever had a Ruger Mk series you'd know what I mean... they are notoriously a PITA to disassemble/reassemble.

This is a really cool looking pistol along those same lines, and it's from 1896! Never produced though, it's a prototype.

Do you have questions about God? 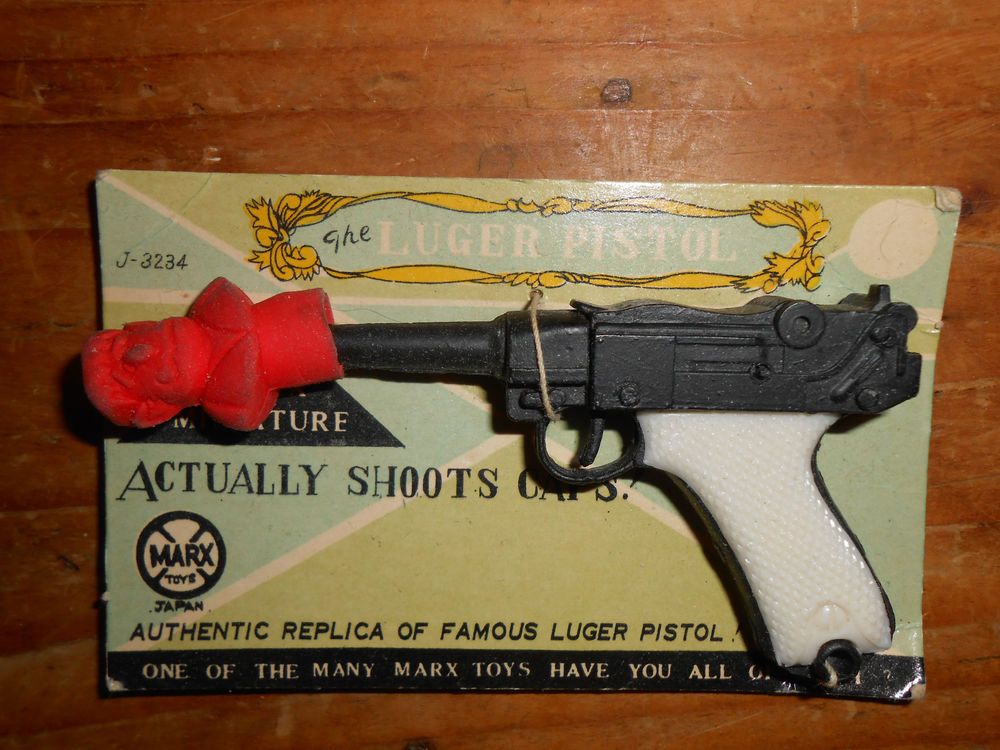 Pshaw, as a real American i plink with :

Brownings 1911 in 22lr. 80% size and weighs about 1 pound. Hella cute.
You do not have the required permissions to view the files attached to this post.
Top

John Browning invented everything
About that stereo
Top

To truly hock a Lugie, the phlegm must come not from the throat, but from the soul.

Snotty.jpg
You do not have the required permissions to view the files attached to this post.
"If fighting is sure to result in victory, then you must fight! Sun Tzu said that, and I'd say he knows a little bit more about fighting than you do, pal, because he invented it, and then he perfected it so that no living man could best him in the ring of honor. Then, he used his fight money to buy two of every animal on earth, and then he herded them onto a boat, and then he beat the crap out of every single one. And from that day forward any time a bunch of animals are together in one place it's called a zoo! (Beat) Unless it's a farm!"
--Soldier, TF2
Top 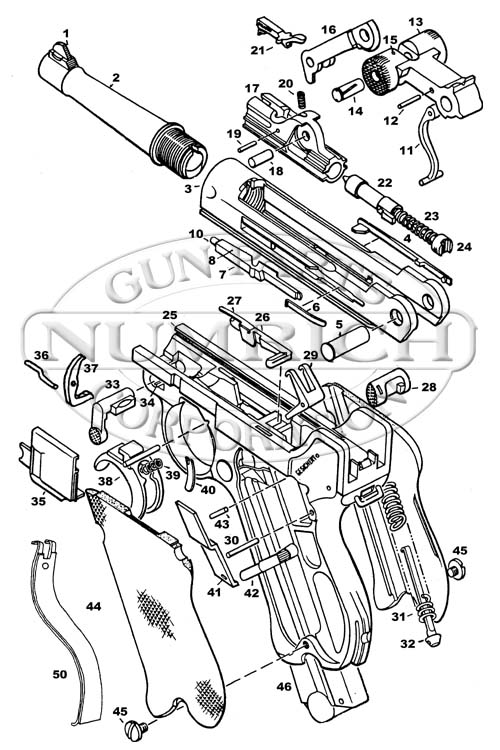 Ok, I bought a Snail Drum magazine. Not going to go into long and unappreciated digression, suffie it to say that these things hold 32 rounds (?) and are for the Artillery model, thus: 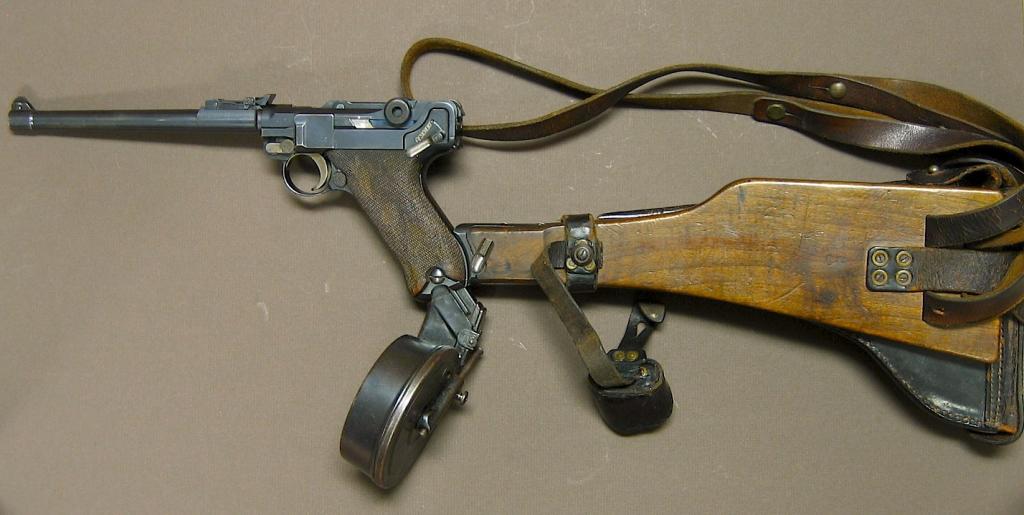 Note that owning this magazine constitutes a felony in 7 states.

Anyway I got one and it is marked thus:
IMG_20191007_213204.jpg
WTF does this all mean? I could speculate but I am curious about your thoughts.
You do not have the required permissions to view the files attached to this post.
About that stereo
Top
19 posts • Page 1 of 1