We post pictures of all sorts of ugly black guns with little emotional appeal. I thought that I'd share a thing that I got some time ago.

Background
The origin of firearms in the west is somewhat opaque. There is no reference that says "wowee zowie look at this cool thing I invented". Rather the appearance of firearms sort of creeps into the historical record. The earliest western reference to gunpowder is found in the writings of the estimable Friar Roger Bacon, an interesting fellow it seems:

"We have an example of these things (that act on the senses) in [the sound and fire of] that children's toy which is made in many [diverse] parts of the world; i.e. a device no bigger than one's thumb. From the violence of that salt called saltpetre [together with sulphur and willow charcoal, combined into a powder] so horrible a sound is made by the bursting of a thing so small, no more than a bit of parchment [containing it], that we find [the ear assaulted by a noise] exceeding the roar of strong thunder, and a flash brighter than the most brilliant lightning." WIKI

The first illustration of a "gun" is found in two manuscripts currently in the UK:

The proportions are not reqlistic. In manuscripts, the object of interest could be distorted, as it is here. The idiots at the RA made a reproduction of this piece and it ended up weighing 1,000,000 pounds or something. It was probably the size of a vase, maybe <2 feet. There was another, similar object found (not in a dateable context, sadly) called the Loshault Gun

The picture shows an accurate reproduction of the original, fireable I might add. I think that vases were used as the core of a green sand mold, hence the shape. The widened base and relatively narrow neck was an inadvertant donus, I think, that put material that followed the pressure generated upon fireing. Interestingly, Rodman's Gun (a big break thru at the time mid 19th c.) looks the same and for the theoretical reasons that I mentioned. 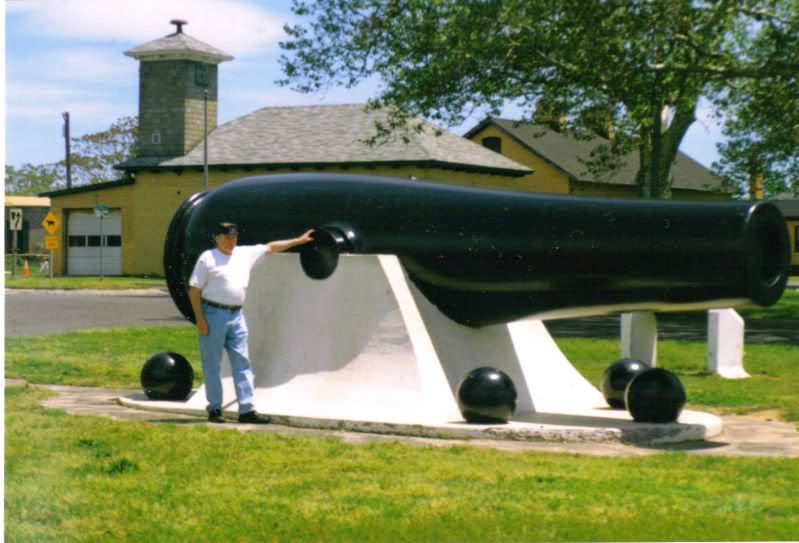 I have a reference, somewhere, of the first documented firearms fatality. It was in Italy and occurred during a demo of a gun of some sort. As I recall, the projectile went over the target, cleared the city walls and proceeded to clobber some unlucky SOB on the far side, killing him. The reference would be interesting, I shall attempt to find it.

The first use of gunpowder weapons in battle is Aljubarrota, 1385, which took place in Portugal. Which brings us to the purpose of this post. I met a guy who is a collector in Portugal who came across a couple of metal tubes that were dug up over there in the vicinity of the battle. They were evidently found in a garden supply store and were being used as nick knacks.

Now a tube can be a number of things. A popular item in Europe (an I suppose other places) was the Noisemaker, an iron tube often mistaken for a gun barrel. Viz.

These things were meant to sit upright, an activity facilitated by their broadened base. The powder to ignite them was kept in a little dish near the touch-hole. Those two characteristics are sufficient for a positive identification of an object having them as a noisemaker.

A gun barrel (gun or cannon, at this point in history they are essentially the same thing) would not have those things. Which brings us back to the flower store. The object I purchased is, I believe, an early (say ca.1400) gunbarrel. I mounted the sucker as it would have been back in the day.

Artillery played an important role at the end of the 100 years war, taking back French castles in English hands. The king had a specialized troop touring the country, and they managed roughly 2 castles / month.
Must have been a strange feeling, sitting there and awaiting your turn…

The top picture that you posted is from the Millemete Manuscript, the one I posted is of a similar device is attributed to the same guy and is known as the Pseudo Aristotle manuscript.

These critters must have been fairly widely available by 1300 or so.
Wenn ich Kultur höre, entsichere ich meinen Browning!
My indifference is boundless

didn't those chinese folk have gunpower prior to all that? hard to believe they never weaponized it.
Top

Yeah, earlier. They made something with bamboo like a firecracker. I don't really know much about that end of it.
Wenn ich Kultur höre, entsichere ich meinen Browning!
My indifference is boundless

Yes, but not guns as such.

Yeah, earlier. They made something with bamboo like a firecracker. I don't really know much about that end of it.

Well, find the fuck out
Top

Yeah, earlier. They made something with bamboo like a firecracker. I don't really know much about that end of it.

Well, find the fuck out