A rather short video about the Great Pyramid and the internal ramp theory.

Then Skank Of America could start in...
Top

Skeevy, free e-book I found for you: 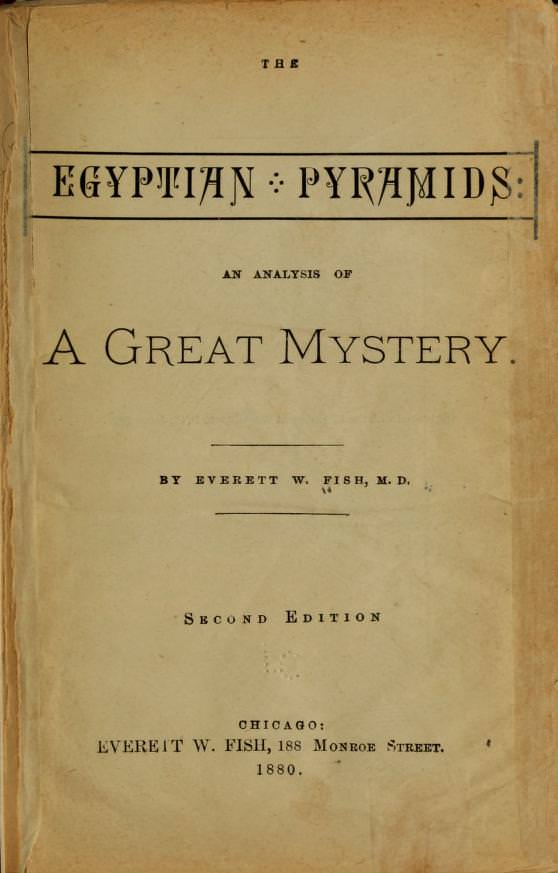 Witness wrote:Skeevy, free e-book I found for you:

It seems to be a book about biblical pyramid-ology.
Thank you Witness.

I found an interesting article that somewhat ties in with it
REVEALED: Great Pyramid of Giza has THIS in common with speed of light.

The exact coordinates of the Great Pyramid of Giza are 29.9792458°N which by itself means very little.

However, some enthusiasts have noticed the number is exactly the same as the speed of light which travels at 299,792,458 metres per second.

One of the most famous aspects of the Great Pyramid of Giza is the fact it is aligned true north.

And if you take the mass of the Great Pyramid at nearly six million tons and multiply it by a factor of one hundred million, it gives you the overall mass of the Earth.

However there are those that believe these are just coincidences.

It is interesting though, that the pyramid may be one of the reasons we have held onto the inch for so long...


The first suggestion that the builders of the Great Pyramid of Giza used units of measure related to modern measures is attributed to Oxford astronomy professor John Greaves (1602–1652), who journeyed to Egypt in 1638 to make measurements of the pyramid. His findings were published in his Pyramidographia and under his name in an anonymous tract.[1] More than a century later, Greaves' measurements and additional measurements made by French engineers during Napoleon's expedition in Egypt, were studied by John Taylor (1781–1864). Taylor claimed that the measurements indicated that the ancients had used a unit of measure about 1/1000 greater than a modern British inch.[2] This was the origin of the "pyramid inch". Taylor regarded the "pyramid inch" to be 1/25 of the "sacred cubit", ancient unit based on the forearm length from the tip of the middle finger to the bottom of the elbow, whose existence had earlier been postulated by Isaac Newton.[3] The principal argument was that the total length of the four sides of the pyramid would be 36524 (100 times the number of days in a year) if measured in pyramid inches. Taylor and his followers, who included the Astronomer Royal of Scotland Charles Piazzi Smyth (1819–1900),[4] also found numerous apparent coincidences between the measurements of the pyramids and the geometry of the earth and the solar system. They concluded that the British system of measures was derived from a far more ancient, if not divine, system. During the 19th and early 20th centuries, this theory played a significant role in the debates over whether Britain and the United States should adopt the metric system.

https://en.wikipedia.org/wiki/Pyramid_inch
Then Skank Of America could start in...
Top

The founder of Jehovah's Witnesses was real big on pyramidology ...

... but the JWs gave up that stuff because it was just too crazy.

Let that sink in.

I googled a bit. 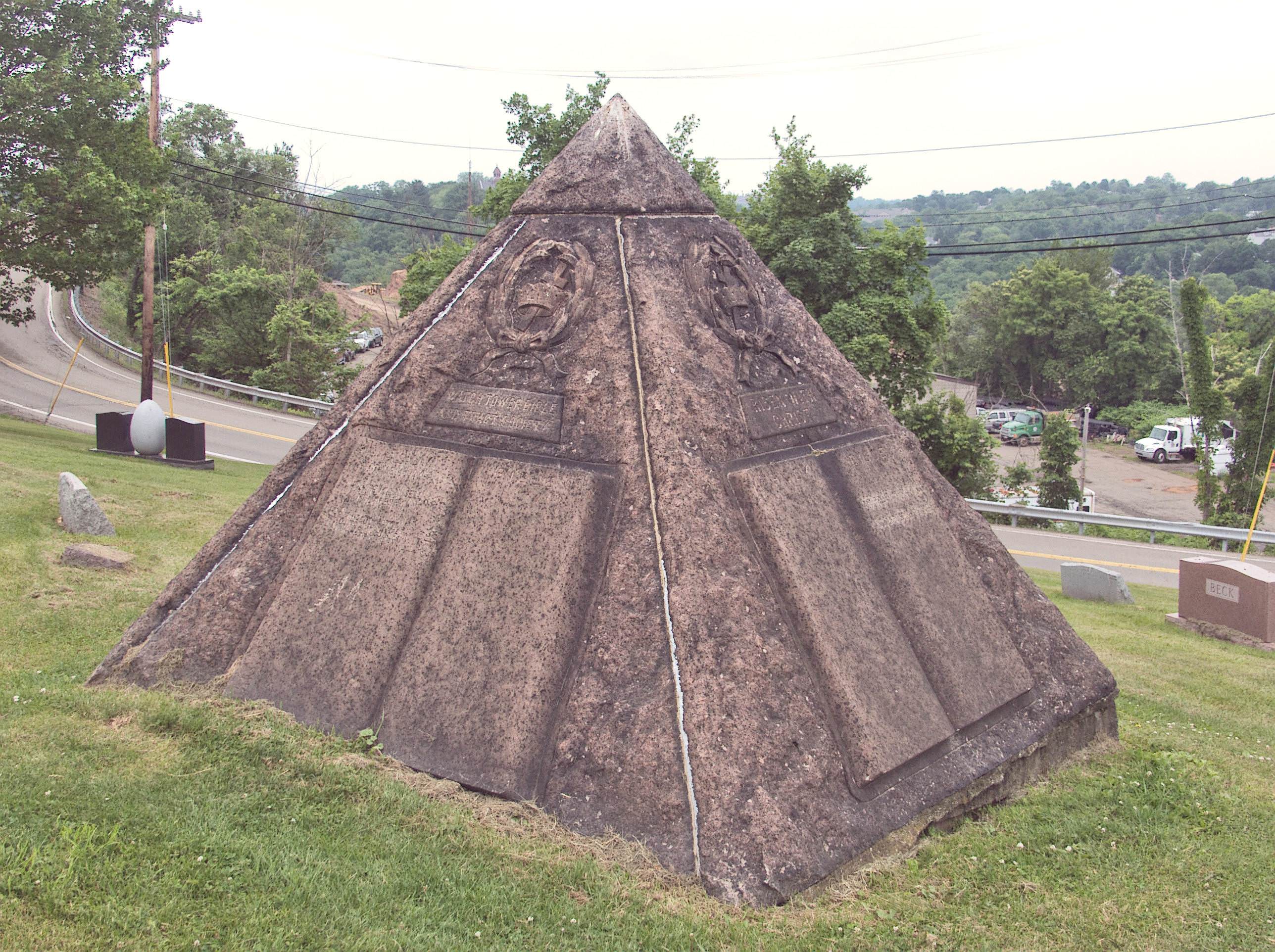 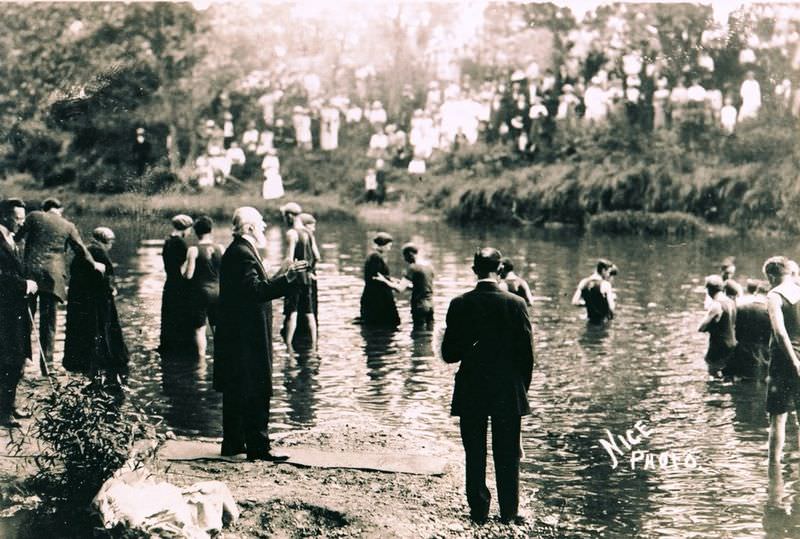 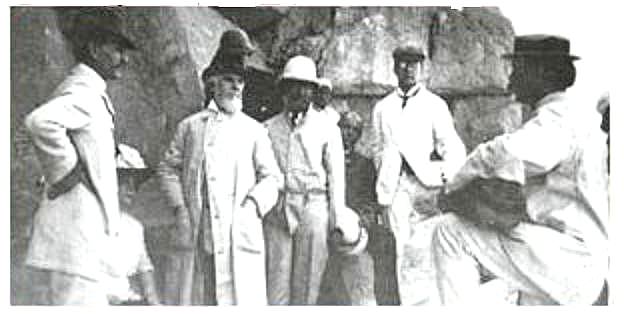 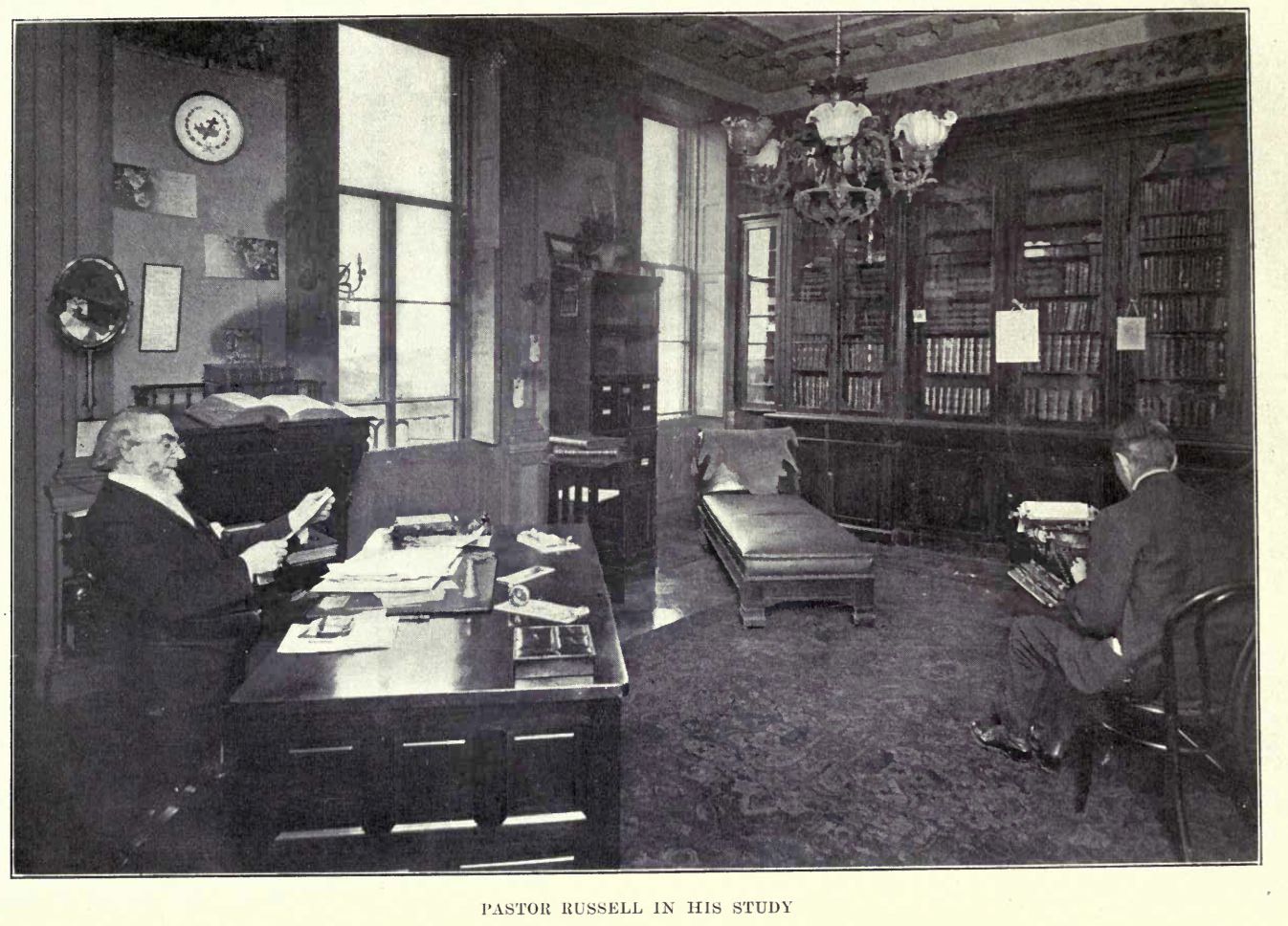 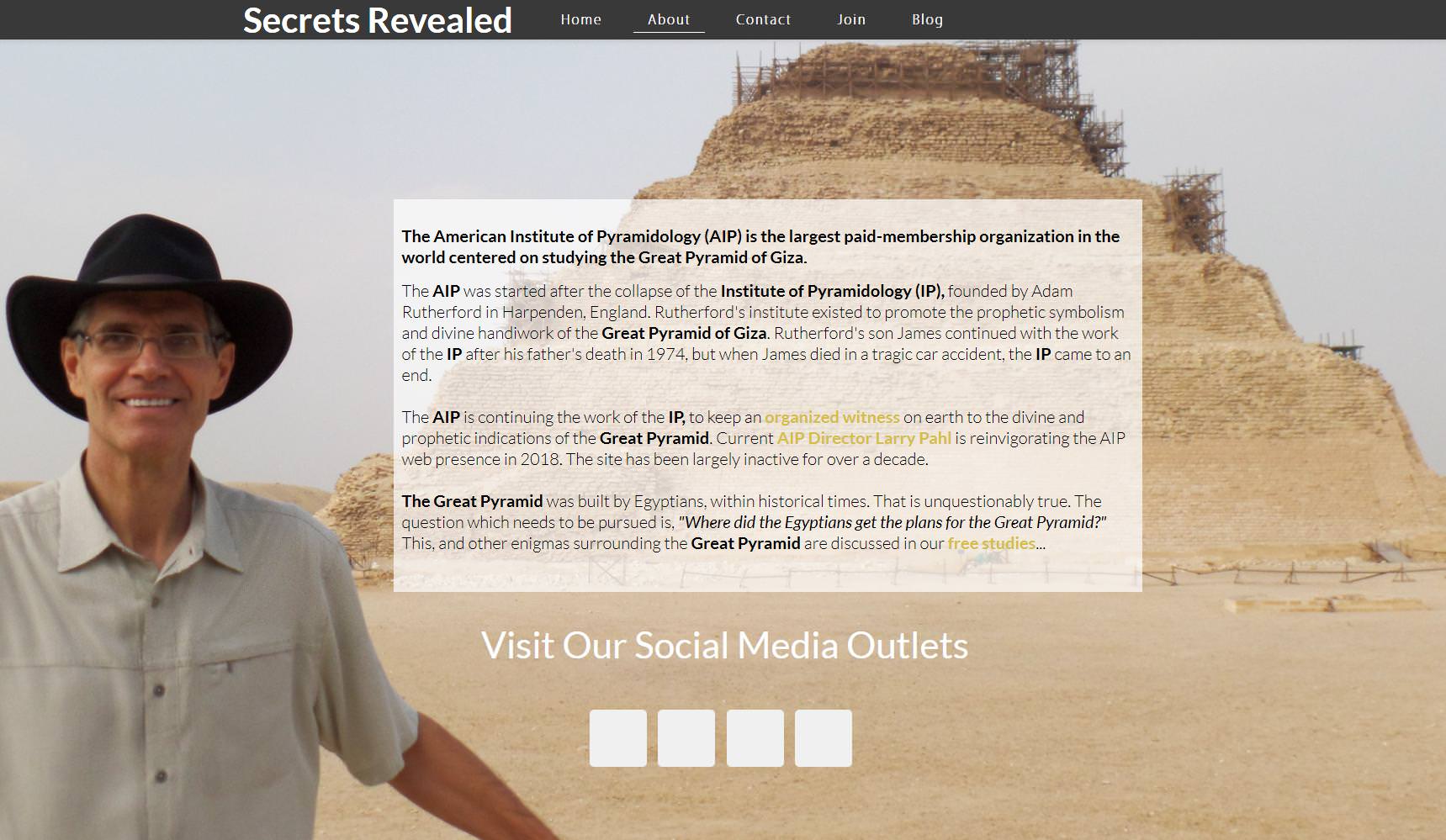 Yeah, "Where did the Egyptians get the plans for the Great Pyramid?" Where?!?

And on it goes:

The mystery of how, exactly, the pyramids were built may have come a step closer to being unravelled after a team of archaeologists made a chance discovery in an ancient Egyptian quarry.

Scientists researching ancient inscriptions happened upon a ramp with stairways and a series of what they believe to be postholes, which suggest that the job of hauling into place the huge blocks of stone used to build the monuments may have been completed more quickly than previously thought.

While the theory that the ancient Egyptians used ramps to move the stones has already been put forward, the structure found by the Anglo-French team, which dated from about the period that the Great Pyramid of Giza was built, is significantly steeper than was previously supposed possible.

They believe the inclusion of the steps and the postholes either side of a rampway suggests the builders were able to haul from both directions, rather than simply dragging a block behind them. The team believes those below the block would have used the posts to create a pulley system while those above it pulled simultaneously.

They believe the find to be significant because they say it suggests the work could have been done more quickly, albeit still involving the heavy labour of a large number of people. 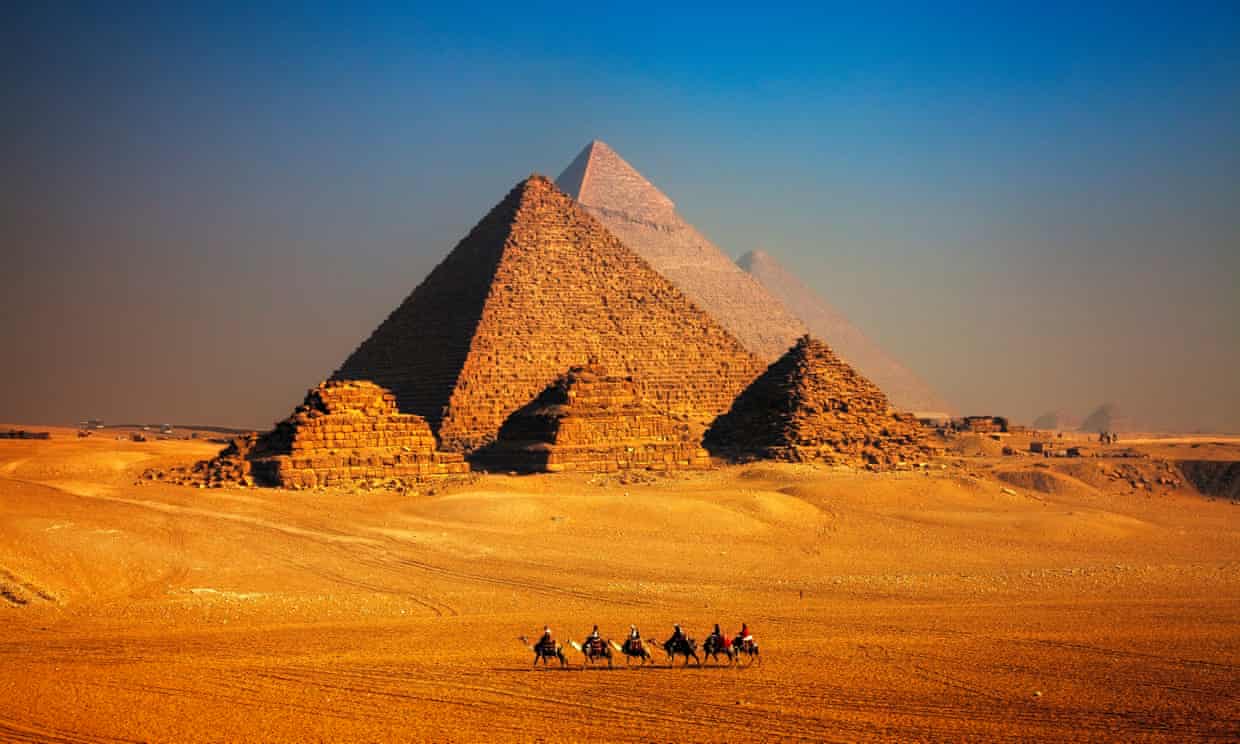 That's where the aliens mounted the anti-gravity beams.

UPDATE: Forgotten discovery in Great Pyramid of Giza could hold 'KEY' to finding hidden chambers
Also a video at the link

The Great Pyramid of Giza is one of the last remaining ancient wonders of the world and for thousands of years, many have speculated what its initial purpose was and what it contains.

Matthew Sibson, an ancient history and civilisations expert, believes the key to unlocking the secrets behind the giant structure is to explore the pyramid’s original entrance and what empty chambers it hides.

In 2016, ScanPyramids discovered a void on the North Face which could have been an entrance into the pyramids.

According to Matthew, the find seems to have been forgotten about because of the discovery of a far larger void in 2017.

But, in his YouTube video, Matthew explained that he original find "is not only the key to unlocking the hidden chambers of the Great Pyramid but is also relatively easy to access".

"If explored, it would re-write the history of the last ancient wonder of the world."

Matthew explained that the smaller void is located directly behind the arch of two chevron beams.

“It sits approximately 56 feet above the ground and east of the central north-south axis,” he added.

"The upper entrance led to a smaller chamber behind the chevrons – the same chamber recorded by the ScanPyramids project,” he said.

But the access into the second chamber has since been blocked with a stone named the Strabo Stone.

Architect Jean-Pierre Houdin also found there was a cavity behind the archway in the exact same place as the ScanPyramids team – some 25 years before.

Matthew went on to explain how Houdin noted there was "mortar protruding from the right after and a limestone block had been pointed with plaster in front of the stone".
“So, Houdin and the ScanPyramids team have evidence that the main entrance into the Great Pyramid is directly underneath the arch,” he continued.

Matthew finished by saying scientists would simply have to obtain permission to drill a small hole into the top 40cm of the triangular section of the entrance to see what is inside.

“Whatever the true purpose of the Great Pyramid was, I believe that all the answers can be found by drilling a small hole into the masonry under the Chevrons," he added.

“We just need to put in a small camera into the hole and it will be far less expensive.”

It comes after two ancient relics could reveal a hidden doorway under the Great Sphinx.

Then Skank Of America could start in...
Top

Maybe they'll find the grain storage after all.
"If fighting is sure to result in victory, then you must fight! Sun Tzu said that, and I'd say he knows a little bit more about fighting than you do, pal, because he invented it, and then he perfected it so that no living man could best him in the ring of honor. Then, he used his fight money to buy two of every animal on earth, and then he herded them onto a boat, and then he beat the crap out of every single one. And from that day forward any time a bunch of animals are together in one place it's called a zoo! (Beat) Unless it's a farm!"
--Soldier, TF2
Top
50 posts