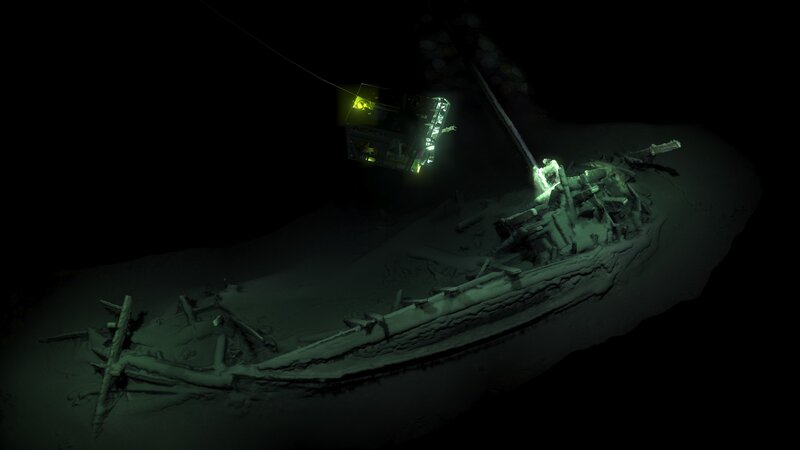 More than a mile beneath the surface of the Black Sea, shrouded in darkness, an ancient Greek ship sat for millennia unseen by human eyes — until the Black Sea Maritime Archaeology Project happened upon its watery grave last year.

The team announced the find Tuesday, saying its discovery has been "confirmed as the oldest intact shipwreck known to mankind." Radiocarbon-dated to roughly 400 B.C., the trading vessel plied the waves in the days of Plato and Sophocles, when the city-states of ancient Greece had scattered colonies all around the Black Sea.

Since then, it has sat at a depth that more than doubles the height of the tallest skyscraper in the world. In water that deep, oxygen is hard to come by, and because of that, so too are the organic processes that help drive decomposition. That left the ship all but undisturbed until the research team discovered it — along with dozens of other shipwrecks — during an 800 square-mile survey of the seabed.

"A ship, surviving intact, from the Classical world, lying in over 2km of water, is something I would never have believed possible," Jon Adams, an archaeology professor at the University of Southampton and the group's principal investigator, said in a statement released Tuesday. "This will change our understanding of shipbuilding and seafaring in the ancient world."

In three years of probing the Black Sea, the group says it has discovered more than 60 sunken ships — from ancient boats like the one announced Tuesday to ships of a more modern variety. That includes a 17th-century raiding fleet launched by the Cossacks, a people who had by that time settled north of the Black Sea, near the border of modern Russia and Ukraine.

The team is releasing a documentary on its findings Tuesday at the British Museum, offering a glimpse into what archaeologist Fredrik Hiebert called "an incredibly rich museum of human history."

But no rum, though.


And this recent one:

Shame that.
You can lead them to knowledge, but you can't make them think.
Top
4 posts • Page 1 of 1