Yeah, it's paleontology – Pyrrho, can the sub-forum be renamed Archaeology & Paleontology?

If you have read Gould's book on the Burgess Shale, perhaps you've felt the thrill of discovering animals different than anything we know today, fundamentally different. (Dinosaurs are just boring vertebrates on that scale.)

The first signs of complex animal life begin in the Ediacaran Period, which started more than 600 million years ago. But it's difficult to understand how those organisms relate to the life we see around us today. Part of this issue is that those fossils are rare, as many rocks of that period appear to have been wiped off the Earth by a globe-spanning glaciation. But another problem is that the organisms we do see from this period aren't clearly related to anything that came after them.

With the arrival of the Cambrian Period about 550 million years ago, all of that changed. In fossil beds like the famed Burgess Shale, we can see organisms that clearly have features of the major groups of life that have persisted to this day. As more collections of fossils become available, we can even watch groups diversify as the Cambrian progressed. But there's still considerable debate over whether these changes represent a true, multi-million-year "explosion" and what environmental changes might have driven this diversification.

We may be on the verge of some big help in answering these questions, as scientists are announcing the discovery of a spectacular deposit of Cambrian fossils from South China. The fossils include dozens of species, half of which we've never seen before, and appear to represent a previously unsampled ecological zone. The preservation is such that soft-bodied creatures like jellyfish, and the softer body parts of creatures with shells, can easily be made out in the rocks. Best yet, the researchers who uncovered the samples suggest that rocks from the same formation are widespread in China.

A new species of marine predator that lived about 506 million years ago (Cambrian period) has been identified from exceptionally well-preserved fossils found in Kootenay National Park — part of the famous Burgess Shale Formation — in Canada. 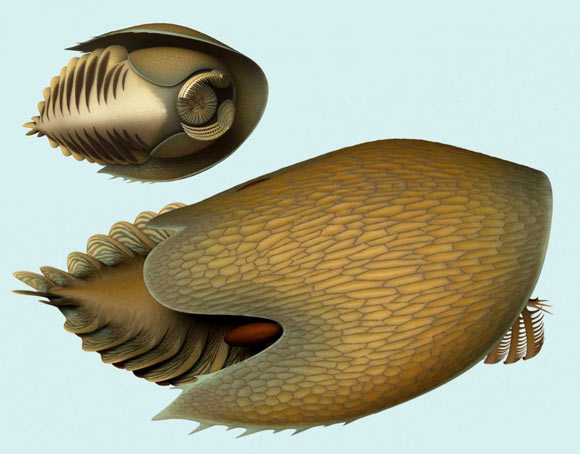 Named Cambroraster falcatus, the ancient creature was up to one foot (30 cm) in length.

“Its size would have been even more impressive at the time it was alive, as most animals living during the Cambrian Period were smaller than your little finger,” said Joe Moysiuk, a graduate student at the University of Toronto and the Royal Ontario Museum.

“Cambroraster falcatus was a distant cousin of Anomalocaris, the top predator living in the seas at that time, but it seems to have been feeding in a radically different way.”

The animal had a large horseshoe-shaped head carapace, rake-like claws and a pineapple-slice-shaped mouth.

“We think Cambroraster falcatus may have used these claws to sift through sediment, trapping buried prey in the net-like array of hooked spines,” said Dr. Jean-Bernard Caron, also from the University of Toronto and the Royal Ontario Museum.
[…]
Perhaps even more astonishing is the large number of specimens recovered.

“The sheer abundance of this animal is extraordinary,” Dr. Caron said.

Based on over a hundred exceptionally well-preserved fossils, the team was able to reconstruct Cambroraster falcatus in unprecedented detail, revealing characteristics that had not been seen before in related species.

So the Burgess Shale site is still productive.