A computer simulation of an ancient Roman instrument recreates sounds that historians could only imagine before. 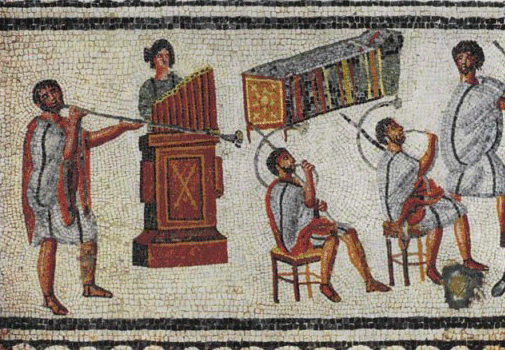 This floor mosaic—found in a house from the 1st century CE in Zliten, Libya—shows musicians performing at a gladiatorial fight. Among the instruments are two curved horns called cornua, whose sound has now been recreated with computer software.

The Roman emperors could command their people’s attention with a sonic blast from a three-meter-long horn, called a cornu. Historians believe that this metallic instrument, which was curved in the shape of a letter “G,” produced a powerful audio signal that could convey messages long distances to both citizens and soldiers. Until recently, however, this signature sound of ancient Rome seemed consigned to oblivion, as all the remaining cornua from this time are broken, unplayable relics. But thanks to a new acoustics study, scientists have created a virtual reconstruction of this instrument, which allows a two-thousand-year-old past to be heard again.

The ancient Romans had a gamut of instruments: from the oboe-like tibia, to the multistringed lyra and the water-based organ hydraulus. “Music was everywhere,” explains Roman historian Alexandre Vincent from the University of Poitiers, France. “Romans played music for theater performances, religious ceremonies, and private banquets.”

In this musical milieu, the cornu was unique in having a role both in communication and entertainment. “The cornua were very useful for how the ancient city worked,” Vincent says. A call from the cornu summoned the population for a decree or the start of a gladiator game. The instrument was also important for the Roman army, as it provided signals to soldiers on the battlefield. “It was a sound of power,” Vincent says.


A traditional military call played in a computer simulation of the cornua. The still image shows a cornu player (incomplete figure on right) within a marble relief from the Archaeological Museum Lucus Feroniae in Capena, Italy.

https://physics.aps.org/articles/v13/32 for the rest
Top

Interesting. Reminds me of Tutankhamun's trumpets, played here. (It's a bit long-winded, so to speak, so fast forward to 9.00 for the action.)

One of the possible references: