Hot topics in delusion and rationalization.
8 posts • Page 1 of 1

Link to Free Republic thread linking to Breitbart, because the Freeper comments are illuminating after a fashion. 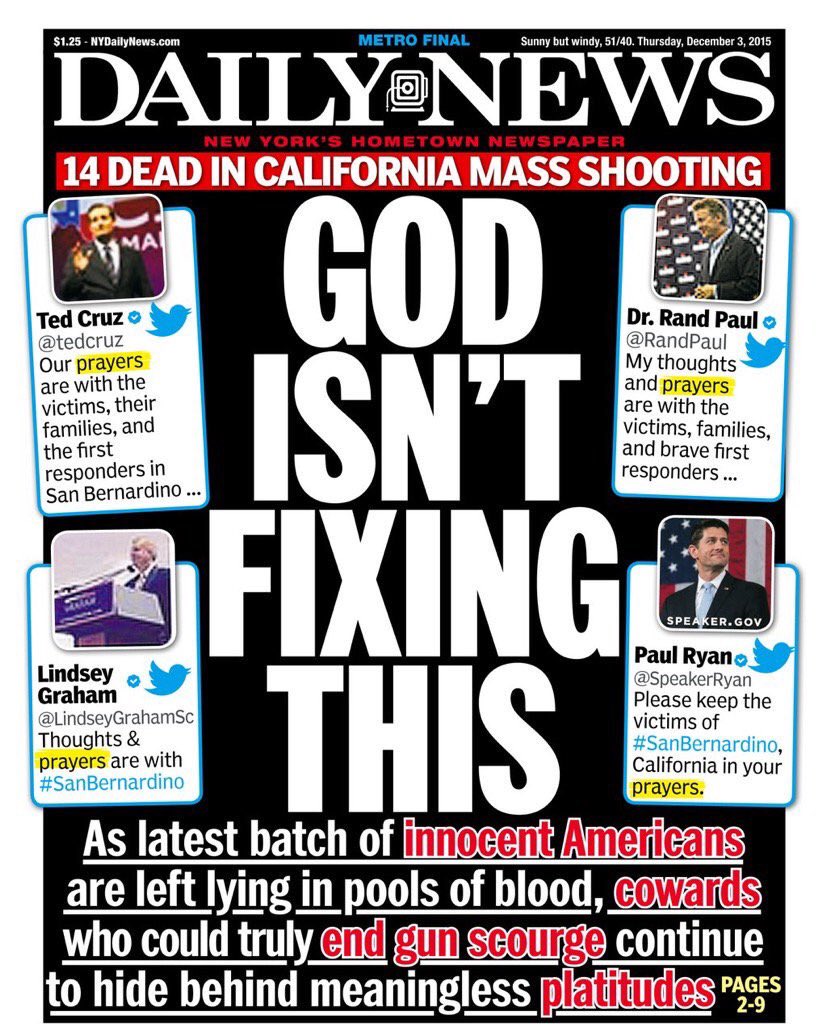 They're so easily baited...

"...and if you don't love the baby Jeebus, then you should all die horribly in the lake of fire for evah, blah blah blabbity blah!!11"


FSM bless their little hearts.
You can lead them to knowledge, but you can't make them think.
Top

As I mentioned else when the article is in the Atlantic "What ISIS really wants.".
Top Seems like The NY Daily News and the NY Post are kind of the same product but are ideological mirror images of each other. Both like to troll. (Found here: http://www.steynonline.com/7334/if-you-see-something )
A fool thinks himself to be wise, but a wise man knows himself to be a fool.
William Shakespeare
Top

Just a reminder: Robert Dear was a devout Christian, but I can't imagine the Post making "Christian Killer" a front page headline.

Oh, this is good. Check out the retraction on the Nov. 20 cover:

And....guess who is whining about this? Good old Ken Ham. He said that the U.S. needs more bible based thinking when it comes to morals.

Ham is a fool. He wants to return to "biblical thinking"? Here's an example of what we'd have then.


"The modern atheist mind wants to use modern their definition of rape as an absolute, such that a woman both before and after marriage is an autonomous being who has rights to resist any man including the man she married, and if he insists on sex, then that is rape and the male is legally guilty of a crime. One atheist University student we discussed this with was shocked to find such a definition did not exist even 20 years ago. Before that in most a western cultures, a married woman could not be raped by her husband since they were one flesh – a very biblical concept. Since the Biblical concept of love makes love not a feeling, but a choice which benefits another, then the Godly man has already figured out if she has a headache coming on, and such compassion means that she never needs to use sex as a weapon, or a legal threat, because a Godly woman is wise enough to never deny her husband to the point where she is forcing him to go elsewhere. "


Or how about this sterling example of morality from Ham's own son in law?
>From: enuffenuff@fastmail.fm
(excerpt follows):
>Good luck with that fuckwit. And Reynold, fucking run, and don't stop.
>Disappear would be best as it was you who dared to attack me on my
>illness knowing nothing of the cause. You disgust me and you are top of
>the list boy. Again, no violence. Just regular reminders of who's there
>and visits to see you are behaving. Nothing scary in reality. But I'd
>still disappear if I was you.
Top
8 posts • Page 1 of 1