How can we expose more people to critical thinking?
41 posts

From a month ago:


The tipster who led federal authorities to the biggest college-admissions scam they have ever prosecuted was Morrie Tobin, a Los Angeles financial executive who was being investigated in a securities fraud case, according to a person familiar with the investigation.

Mr. Tobin was being questioned in an alleged pump-and-dump investment scheme—in which people conspire to inflate the price of a stock so they can sell it at a profit—when he offered a tip to federal authorities in an effort to obtain leniency.

Who else? What a ballbuster.
You trying to be a wiseguy with me?
Top

Fuckin' rat!
What's really funny is . . . the fucking bank job away in Secaucus . . . I'm in the middle of the fucking weeds!
Top

Link: https://twitter.com/BenjaminJS/status/1134241999991857153
The flash of light you saw in the sky was not a UFO. Swamp gas from a weather balloon was trapped in a thermal pocket and reflected the light from Venus.
Top

A new "scam" or just creative gaming of the system?


Dozens of suburban Chicago families, perhaps many more, have been exploiting a legal loophole to win their children need-based college financial aid and scholarships they would not otherwise receive, court records and interviews show.

Parents are giving up legal guardianship of their children during their junior or senior year in high school to someone else — a friend, aunt, cousin or grandparent. The guardianship status then allows the students to declare themselves financially independent of their families so they can qualify for federal, state and university aid, a ProPublica Illinois investigation found.

“It’s a scam,” said Andy Borst, director of undergraduate admissions at the University of Illinois at Urbana-Champaign. “Wealthy families are manipulating the financial aid process to be eligible for financial aid they would not be otherwise eligible for. They are taking away opportunities from families that really need it.”

Abdul Alhazred wrote: ↑Tue Jul 30, 2019 12:07 pm It's not about "education" or colleges in general, it's about getting a shot at joining the ruling class.

Who already cheat merely by being ruling class.

You are right. We should level the playing field so that EVERYONE is a member of the ruing class.

I will take on the burden of performing this service, Me and my team of nubile acolytes. We will work diligently to make everyone equal and our requirements are simple. Allow me to make up the laws necessary for this actualization of proletarian elevation. I promise I will not abuse my authority. Naturally, this will be a complicated process and the inner workings of it must remain secret. I will need a small police force for security. Since I AM the people, in effect, there is not need for anyone to possess weapons of any sort. We will be going door to door to collect them and if you are not sure if you have any we will help you look for them.

We will make various drugs legal and freely available. The motto of our new world order will be:


proletarian elevation thru stupification
I know making everyone the same has been tried before but not like this. This time it will work because I can be trusted. See? I said it.
This space for let
Top

This is just a book review by George Will, but I enjoyed it:


It is not easy being an affluent progressive and a scourge of privilege.

Did anyone ever go to jail over this?
still working on Sophrosyne, but I will no doubt end up with Hubris
Top

OMG, the suffering, the horror, the horror
still working on Sophrosyne, but I will no doubt end up with Hubris
Top

Some cases are still pending. Those who pled guilty, like Felicity Huffman, have already served their sentences, but for those who didn't, they added more charges like money laundering. Those cases could take months or years to resolve. I think Lori Loughlin's case is still pending.

Actress Lori Loughlin and 10 other parents accused in a massive college admissions scandal are facing additional charges, the Department of Justice announced Tuesday.

A grand jury in the District of Massachusetts brought the new charges against 11 of the 15 parents charged in the case, including Loughlin and her fashion designer husband, Mossimo Giannulli.

Loughlin and the 10 other parents facing new charges have pleaded not guilty to the previous charges in the alleged scheme.

Ultimately they could spend more time in jail than Huffman and others who took the plea deal.
A fool thinks himself to be wise, but a wise man knows himself to be a fool.
William Shakespeare
Top

Isn't the whole idea of plea deal to limit damage (when you know you're toast, of course) while easing the judge's work?
That process always seemed weird to me.
Top

Isn't the whole idea of plea deal to limit damage (when you know you're toast, of course) while easing the judge's work?
That process always seemed weird to me.

Isn't the whole idea of plea deal to limit damage (when you know you're toast, of course) while easing the judge's work?
That process always seemed weird to me.


Plea bargaining is more about trading reduced charges and a recommendation by the prosecutor to the judge for a reduced sentence in exchange for making the prosector’s life easier. Judges like plea deals too, and thus will usually go along with the prosecutor’s sentencing recommendations. But prosecutors benefit more.

When you realize that only five to ten percent of all criminal cases go to trial (the rest either get dismissed or a plea deal), you understand that the prosecutors can’t try every case. Going from five percent to ten percent trials would nearly double their work load. When prosecutors were being dicks, the only real leverage we had in the PD’s office was “No more pleas. All our clients want jury trials.”

It rarely came to that. Usually the mere threat was enough. I didn’t like it myself, since it meant individual clients would get slammed. And everyone usually understood what was reasonable. But occasionally prosecutors would try to play hardball for as long as they could (usually new prosecutors). I never saw it last. Not only was it an impossible work load, the judges would get pissed off and start leaning on them, too.
Top

If you care, and if you can get past the paywall, the New York Times did a follow up story on what actually happened to the people arrested and their children.

What happened to the students caught up in the college admissions scandal? - The New York Times
A fool thinks himself to be wise, but a wise man knows himself to be a fool.
William Shakespeare
Top

Feels like news from another era, but the wheels of justice turn slowly for the rich and famous.


US actress Lori Loughlin, of the sitcom Full House, and her husband, designer Mossimo Giuannulli, will plead guilty to college admissions scam charges.
They are among 50 people charged in an alleged criminal enterprise to get their children into top US schools.
The couple had initially pleaded not guilty to the fraud charges.
Officials say they have agreed to a plea deal of prison time, a fine, and community service under supervised release.
According to the District Attorneys office in Massachusetts, Ms Loughlin will plead guilty to conspiracy to commit wire and mail fraud "on a date to be specified by the Court".
Mr Giannulli will plead guilty to the same, plus one count of honest services wire and mail fraud.
Prosecutors had said Ms Loughlin and Mr Giannulli paid $500,000 (£408,000) in bribes to have their two daughters admitted into the University of Southern California (USC) as fake rowing-team recruits.
Under the terms of the deal, Ms Loughlin will serve two months in prison, pay $150,000 in fines, have two years of supervised release and complete 100 hours of community service.
Her husband's sentence is similar: he will serve five months in prison, pay $250,000 and must complete 250 hours of community service.
The pair will bring the total number of parents pleading guilty in the scam to 24.

Maybe they can get prison lifestyle tips from Martha Stewart.
The flash of light you saw in the sky was not a UFO. Swamp gas from a weather balloon was trapped in a thermal pocket and reflected the light from Venus.
Top

Poor Martha. Her mistake was talking to the FBI. (or SEC or something.)

If only she had friends in high places like Flynn.
A fool thinks himself to be wise, but a wise man knows himself to be a fool.
William Shakespeare
Top 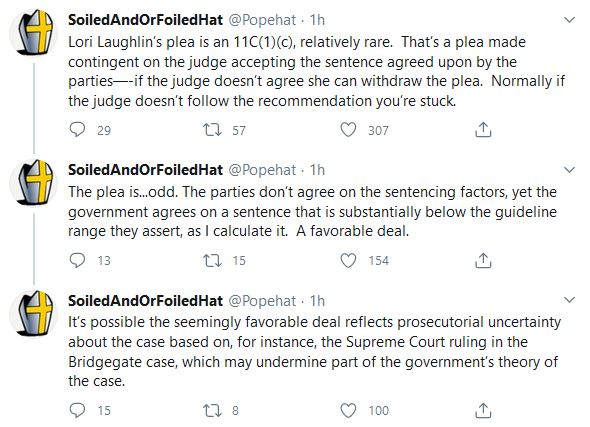 Basically a slap on the wrist if memory serves, but at least a slap that's hard enough to sting a bit. They'll each spend a few months in jail, do a few hundred hours of community service and pay a hefty 6-figure fine.