This is a question I've had on my mind for awhile, so I figure what better place to unload it then the new forum.

One often hears that X% of species that have ever lived are extinct, where X is usually something > 99. I wonder if all the transitional species are counted as extinct?

Consider eohippus, the "Dawn Horse" and ancestor of the modern horse. 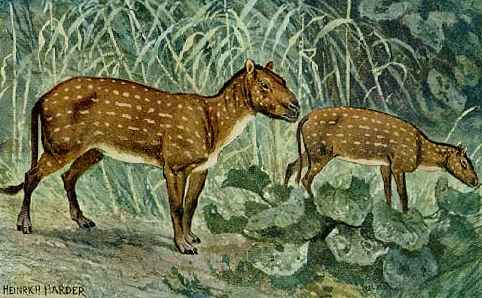 I could see one making compelling arguments both for and against whether it is actually "extinct". So which is it?
Top

If a species is defined as " ... an actually or potentially interbreeding population that does not interbreed with other such populations when there is opportunity to do so." (http://users.rcn.com/jkimball.ma.ultran ... ation.html) - then eohippus is extinct and the ancestor of modern horses etc.
I'm a bit dubious about the term "transitional species" which hints at the notion that such a species is just paving the way for a newer, better one. That term can only be used of an ancient species from our present day perspective in the light of our knowledge of how evolution actually panned out. Eohippus would not have thought of itself as transitional to anything, it was a successful species it its time - 50 million years ago - successful enough to evolve into modern horses. I wonder what we are transitional to?
Top

Every species is transitional, isn't it?

When people ask for transitional species, they are usually asking for gaps to be filled. That's a fine thing to ask for, as long as they realize that every gap filled results in two new gaps. If they use that argument as evidence that evolution is flawed, well, that's pretty darn funny.

Each extinct species that is discovered needs to be categorized: Was it on the ark or not?

Well, no. Lots of them are just evolutionary dead ends. I guess my question is, are they differentiated from the extinct transitional species? If so, does anyone have an idea of what the ratio is?
Top

Well, no. Lots of them are just evolutionary dead ends. I guess my question is, are they differentiated from the extinct transitional species? If so, does anyone have an idea of what the ratio is?

I would think so because of the nature of how we discover extinct species. We find them as fossils and don't have the benefit of observation over the entire time of the animal's existence. Take a hypothetical valley with eohippus living in it. As time goes on, climate and vegetation change leading to the gradual evolution of modern horses. Now we go dig up that valley and find distinct fossils that obviously couldn't have bred with one another. We would call them all seperate species.

(I know the example is stupidly simple, but I hope it makes my point)
"I'll have the roast duck with the mango salsa."
Top

actually hex, it's not a bad example, especially if you change your organism to insects, or more likely, marine arthropods.
The term "transitional species" is very frowned upon by evolutionary biologists. If i tried to use it in a manuscript, it'd be booted. It is a handy mental construct, but has it's roots in Aristotles' ladder, and live just isn't that kind of hierarchy.

basically, if it's dead, it ain't breeding with anyone. ergo, it's a separate species. For a lot of fossils, we are just using the phenotypic appearance, not the actual genotypic compatability. Unless something was fossilized in copulo, we just don't know. Example: trilobites tend to be classified on eye shape, more than genetalia. the squidgy bits don't fossilize well, even in an exoskeleton.
Top

I agree that transitional species, or forms, is not a very useful concept. With the possible exception of obvious evolutionary dead-ends, either all forms are transitional, or none are. This certainly holds true of extant forms.

You see, either we say that any life-form is potentially on its way to a new one, in which case all are transitional.

Or, we say that each life-form is itself. To exist it must be viable, and that other, equally viable, form have descended from it or might descend from it is irrelevant for its existence.

A third option is to talk about transitional types, that is types that in form and lifestyle present a typocal intermediate between two successive groups. Examples are the lizard bird, dinosaurs with beaks, etc.

and Hans brings up the very troublesome problem of reproductive isolation: how far does one take it? I am reproductively isolated from people in Japan. Am i a separate species?
If i was a fruitfly, the answer might be yes. But it would depend entirely on the whim of the individual taxonomic specialist of the group.

I had a professor as an undergraduate whose entire research career was built around genetalia transplants in beetles to see who would interbreed, if they just had the right equipment

bug_girl wrote:actually hex, it's not a bad example...

Yay! I'm not an evolutionary moron even though it's been at least 7 years since I had a class on it!
"I'll have the roast duck with the mango salsa."
Top

In thinking about evolution it is important to avoiddetermisnistic ideas like "transitional' and 'dead end', because evolution is evry blind. A species doesn't know it's a dead end, and we can't really say it didn't radiate into a different species.

However perhaps EY's question could bear rephrasing to fit it into a different terminlogy.

What proportion of species that we think existed were actualy seperate species?
For example during times of radiation there will be great variation in morphology and the same genome. So alot of things that look like other species are actualy the same species. Take modern dogs, if you found a chihuahua skeleton and a wolf skeleton you would most likely conclude that they were different spieces. Which they aren't.
Top

bug_girl wrote:and Hans brings up the very troublesome problem of reproductive isolation: how far does one take it? I am reproductively isolated from people in Japan. Am i a separate species?
If i was a fruitfly, the answer might be yes. But it would depend entirely on the whim of the individual taxonomic specialist of the group.

I had a professor as an undergraduate whose entire research career was built around genetalia transplants in beetles to see who would interbreed, if they just had the right equipment

But as a human, you're not reproductively isolated from Japan. Mechanically, you can still have a baby with somebody a Japanese bug-boy. Genetically, you could breed. Geographically you may technically be isolated, but with human movements through technology being so common, it does not affect as isolation as it won't produce an isolated population.

By the old convention, speciation occurs when true genetic isolation occurs; i.e., fertilisation will not occur between a male and a female of the populations in question. By modern convention, concerning molecular methods of evolution...it's still a minefield.

Swapping the uglies on bugs? There's a job I could sign up for...

Abraxas
'There is a mask of theory over the face of nature,' William Whewell
Top

Yes, but again, if i was a fruit fly....even a valley would be enough of a geographic barrier that speciation might be decided. In most cases, it's a judgment call by a taxonomist. Not many cross fertilization attempts are actually made.
Top

IIRC, there are also several "species" distributed across north america such that an animal from the central area can breed with an animal from either coast, but habitants of the west coast and east coast are diverse enough that they cannot reproduce with each other. In other words, there is a continuous variation, rather than strict dividing lines between species.

Perhaps the same is true for the lineage from Eohippus to modern horses? That is, Eohippus cannot reproduce with the modern horse, but an animal in the "family tree" that lived some time in the middle would be able to breed with both? Where, then, do you draw the line between species? If all members of one generation are able to reproduce successfully with all members of the next generation in a closed interbreeding population, then Eohippus is only really a separate species in light of the fact that its gene pool has changed over the past 50 million years.

I suppose Eohippus is extinct in the sense that no singular animal alive today has the same charateristics as one would expect from a member of Eohippus, nor could even reproduce successfully with one. However, if you consider it from the point of view of Eohippus' gene pool, it has merely undergone a gradual change over the course of successive generations.

bug_girl wrote:Yes, but again, if i was a fruit fly....even a valley would be enough of a geographic barrier that speciation might be decided. In most cases, it's a judgment call by a taxonomist. Not many cross fertilization attempts are actually made.

Wouldn't the atmospheric plankton phenomena insure that bugs (excuse me I mean insects actualy) have plenty of oppotunity to meet and greet others that are of the same species even if there is geographical dislocation?

Although I do agree that most taxonomists judge solely on morphology.
Top

It doesn't seem to happen as often as you might think. Lots of insects have home ranges measured in inches, and are limited to specific host plants.
The combination of being blown off course, meeting a suitable breeding partner, and then finding a place to lay eggs, then having larvae survive....that's a lot of low probability events.

Eisner, i think, did a lot of work on metapopulations and isolation in one meadow of butter flies. I'll see if i can find that reference. (Eichner? dang. need more coffee.)
Top

Cool, I was specificaly thinking of Painted Ladies when I thought of long distance travelers, we always seem to get the first ones in the spring arriving on storm front.

I can see how some of the skippers might have very limited ranges. I hadn't really thought about the larval food issue, oops.
Top
16 posts • Page 1 of 1