Ever-Elusive Neutrinos Spotted Bouncing Off Nuclei for the First Time 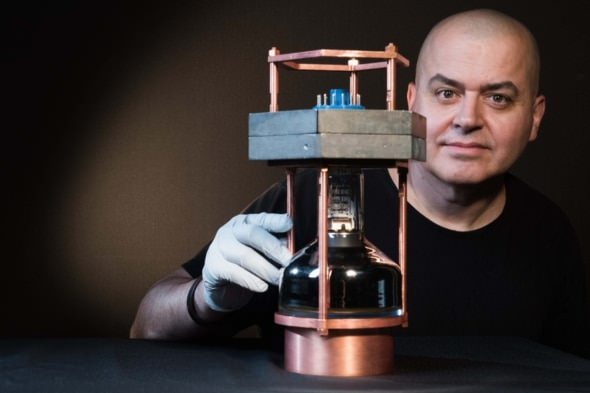 Juan Collar, a professor in physics at the University of Chicago, with a prototype of the world’s smallest neutrino detector used
to observe for the first time an elusive interaction known as coherent elastic neutrino nucleus scattering. Credit: Jean Lachat

Neutrinos are famously antisocial. Of all the characters in the particle physics cast, they are the most reluctant to interact with other particles. Among the hundred trillion neutrinos that pass through you every second, only about one per week actually grazes a particle in your body.

That rarity has made life miserable for physicists, who resort to building huge underground detector tanks for a chance at catching the odd neutrino. But in a study published today in Science, researchers working at Oak Ridge National Laboratory (ORNL) detected never-before-seen neutrino interactions using a detector the size of a fire extinguisher. Their feat paves the way for new supernova research, dark matter searches and even nuclear nonproliferation monitoring.

This is apparently a really big deal. They envision hand-held detectors. Does that mean we could actually use a neutrino generator/detector combo as a communication device? That would be a BFD for subs.
Top

If it's nuclear subs, they already have a neutrino generator on board.

The tough part is modulating the signal.

If it's nuclear subs, they already have a neutrino generator on board.

The tough part is modulating the signal.