We're going to Pluto for the swimming.

We're going to Pluto for the swimming.

Gas insulation could be protecting an ocean inside Pluto
Science Daily

Researchers at Japan's Hokkaido University, the Tokyo Institute of Technology, Tokushima University, Osaka University, Kobe University, and at the University of California, Santa Cruz, considered what could keep the subsurface ocean warm while keeping the ice shell's inner surface frozen and uneven on Pluto. The team hypothesized that an "insulating layer" of gas hydrates exists beneath the icy surface of Sputnik Planitia. Gas hydrates are crystalline ice-like solids formed of gas trapped within molecular water cages. They are highly viscous, have low thermal conductivity, and could therefore provide insulating properties.

Appropriately designed submersible could prove interesting. But we should send the first series to Europa.

Since there seems to be a lot of water in our system, and Oxygen on our planet is largely created by life, one must ask how much primordial Oxygen there is, necessary to create an ocean in which life may begin.

No real answer there but it does show there is at least some.
You can lead them to knowledge, but you can't make them think.
Top


A "beating heart" of frozen nitrogen controls Pluto's winds and may give rise to features on its surface, according to a new study.

sparks wrote: ↑
Tue May 21, 2019 7:50 pm
Since there seems to be a lot of water in our system, and Oxygen on our planet is largely created by life, one must ask how much primordial Oxygen there is, necessary to create an ocean in which life may begin.

I don't understand that. Oxygen is a deadly poison, and water seems to be much more abundant in the Solar System than oxygen gas.

Oxygen tends to combine with other things and not stick around as a gas.

Oxygen is an oxidizer.

Oxygen is an oxidizer.

Michael Guillen: Why is Pluto no longer a planet? The answer may surprise you (here's why it also must change)

Pluto was a planet in good standing for seventy-six years when in 2006, out of the blue, it was demoted and booted from our solar system’s family of planets. The stunning event – still hotly debated among astronomers – reveals more about astronomy’s messy subjectivity than Pluto’s stature.

The drama traces back to 1992 when astronomers found a region of our solar system beyond Neptune that teems with small, icy worlds. It’s named after Gerald Kuiper, father of modern planetary science.

Pluto exists within this Kuiper Belt and resembles its icy neighbors in certain ways, but is much bigger. In 2003, however, astronomer Mike Brown and others discovered a beltway denizen that rivaled Pluto in size. It was named Eris.

The find made headlines and triggered an internal debate about what actually constitutes a planet. Unbelievably, it was a question that scientists for more than 2,000 years had never formally settled.

The debate boiled down to this: Should Eris be invited into our solar system’s exclusive country club of planets? Or should Pluto be shown the door?

In 2006 astronomers gathered in Prague for the triennial general assembly of the International Astronomical Union (IAU). On the assembly’s final day attendees voted to approve an unprecedented definition of the term "planet" -- one clearly designed to exclude Pluto.

A legitimate planet, the IAU declared: 1) orbits the Sun, 2) has a “nearly round shape,” and 3) “has cleared the neighbourhood around its orbit.” Pluto fails the third criterion.

Why would the IAU do such a thing?

Mainly because a more open-minded definition would allow – God forbid – hordes of celestial objects into the ultra-exclusive country club of planets. One group of astronomers recently proposed that planets are simply “round objects in space that are smaller than stars.” If so, our solar system has 110 planets.

My favorite of all proposed definitions is this: a planet has a radius of at least 1,000 kilometers (about 621 miles). That makes it gravitationally hefty enough to assume a round shape – exactly how we picture a planet. This solution implies our solar system has ten planets, including Pluto and Eris.

Options aside, here are three big reasons why the IAU’s decision, not Pluto, should be ditched.

Two: the IAU definition is ambiguous, completely arbitrary – not based on scientific precedent – and specifically intended to discriminate against planetary diversity. There is not an objective, scientific reason to lock out worlds such as Pluto simply because they’re different than the eight country clubbers.

The truly impartial thing to do is admit that planets – like stars and galaxies – come in a far greater variety of sizes, appearances, and behaviors than we ever imagined.

Three: the IAU ratification process was not legitimate. The votes were taken during the assembly’s closing ceremonies, after most of its 2,500-plus attendees had vamoosed. Only 424 astronomers ended up voting, out of IAU’s 10,000 total members.

Recently, when some astronomers refused to abandon Pluto’s cause, Mike Brown – Eris’s co-discoverer, you’ll recall – tweeted, “Oh god the stupid Pluto stories are back. Yes, someone has proposed making Pluto a planet again.”

His colleague Konstantin Batygin agreed, tweeting, “let’s all remember that astrophysical bodies are characterized by mass, radius, orbit, etc. These quantities are what’s important, not what we call them.”

But if Batygin really believes categories don’t matter, then why have he and Brown spent so much energy fighting against planetary diversity and for Pluto’s categorical downgrading – and boasting about it? Brown’s Twitter handle is @PlutoKiller. Because Trump! [Shhh! – Ed.]
It’s because they know it does matter what we call things. Science is all about classifying nature.

Sure, Pluto is a small, cold oddball. But thanks to the ongoing analysis of eye-popping photos and data from the New Horizons spacecraft that flew past it in 2015, we’re now learning that Pluto, with its five moons, is one of the most spectacular worlds in our solar system. It even looks to have key attributes possibly conducive to life, including water and organic chemicals.

“It’s more dynamic and alive than Mars,” says University of Central Florida planetary scientist Philip Metzger. “The only planet that has more complex geology is the Earth.”

For all of these reasons and others, I believe it’s high time for us to restore Pluto’s rightful place in the solar system and call it what it is: a planet!

!
Mob of the Mean: Free beanie, cattle-prod and Charley Fan Club!
"Doctor X is just treating you the way he treats everyone--as subhuman crap too dumb to breathe in after you breathe out." – Don
DocX: FTW. – sparks
"Doctor X wins again." – Pyrrho
"Never sorry to make a racist Fucktard cry." – His Humble MagNIfIcence
"It was the criticisms of Doc X, actually, that let me see more clearly how far the hypocrisy had gone." – clarsct
"I'd leave it up to Doctor X who has been a benevolent tyrant so far." – Grammatron
"Indeed you are a river to your people.
Shit. That's going to end up in your sig." – Pyrrho
"Try a twelve step program and accept Doctor X as your High Power." – asthmatic camel
"just like Doc X said." – gnome

Raises interesting questions. One I haven't heard yet is....are we going back? Maybe even land a probe someday?

If I remember correctly, Pluto is a very difficult planet to reach, and astrophysics calculated that the next window of opportunity to get a probe to Pluto won't happen for another 200 some years....something about needing Uranus or Neptune in close proximity to slow down and reposition its trajectory.

But ionic propulsion is approaching its testing phase, and warp drives haven't been taken off the table yet.

And we have so much better camera and video technology now compared to what we launched back then. ....
Such potential!
Top

↑ It is a trade-off between time and energy:

The Interplanetary Transport Network (ITN) is a collection of gravitationally determined pathways through the Solar System that require very little energy for an object to follow. The ITN makes particular use of Lagrange points as locations where trajectories through space are redirected using little or no energy. These points have the peculiar property of allowing objects to orbit around them, despite lacking an object to orbit. While it would use little energy, transport along the network would take a long time. 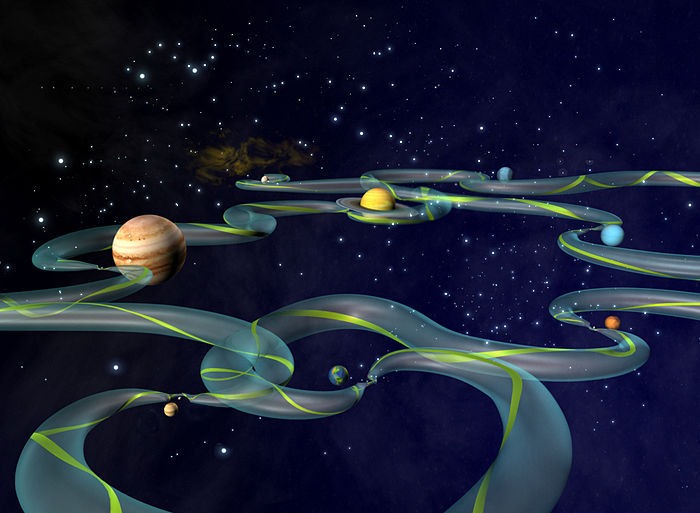 This stylized depiction of the ITN is designed to show its (often convoluted) path through the Solar System. The green ribbon represents one path from among the many that are mathematically possible along the surface of the darker green bounding tube. Locations where the ribbon changes direction abruptly represent trajectory changes at Lagrange points, while constricted areas represent locations where objects linger in temporary orbit around a point before continuing on.

But getting really farther than the Moon or Earth's Lagrange points practically for free would take ~ 1000 years. Can we build such hardy equipment? Will we still be there when it reaches destination? Ha ha!
Top

I never knew anything like that was possible. Nice practical use for Choas Theory and 3 Body Problems.