Back in the '90's, I used to restore antique radios from the late '30's and early forties. I did it as a hobby in my garage, mostly to get away from the wife and kids for an hour or three in the evenings and a few more on the weekends. In total, I probably did a dozen or so and sold them at a little profit to antique stores. Here's a representive one I did first: 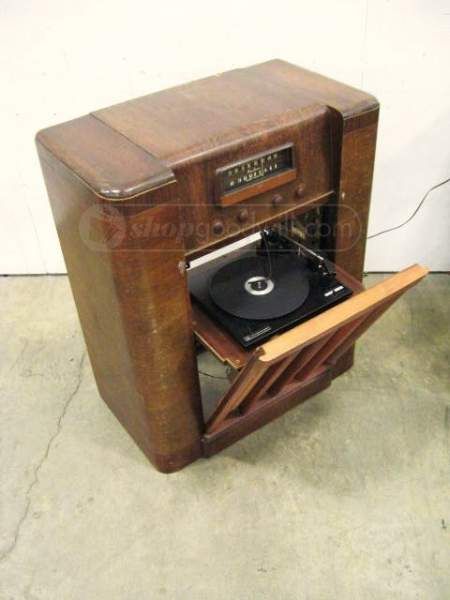 Not the actual pic of the one I had, but the same make and model.

Think tubes, a half dozen or so usually. Wax coated capacitors, hand-wound transformers. No circuit boards to speak of, rather just components running from point to point, usually to a pin of a tube. Beautiful wood cabinetry; varnished. So solidly built you wondered how they made a profit.

The electronics, as they were, were dead simple. No schematics were easily available (then, they are now) but an experienced eye could pretty much work it out by said eye. Getting them working again wasn't much of a chore. Mainly you just replace all the wax capacitors with something new; one just assumed they were leaky given their age. Look for any obviously burned resistors and replace as needed. Replace any tubes that weren't glowing; if it glows, it's good; very robust. Tubes were hard to get back then (they're not now), but mail-order was a thing. When you were done you could manually tune the inductors for perfect performance as they all had screw-type cores; simple but effective.

But mainly I focused on the cabinet finish. I would carefully remove the old varnish, more carefully sand and repair the surface, and refinish again with varnish; newer finishes would not do if you wanted to resell it. That took dozens of hours per unit. But it was zenful.

Back then, I thought about how cool it would be if I could modify the circuitry such that when it was turned on and tuned to any given channel, a recording of something from that era would play instead of regular AM radio. At the time, there was no way to easily accomplish that. Today, however, it would be easy. A simple and cheap Arduino computer along with some switching and a flash drive could give me 1000's of hours of playback across a dozen or so selected (but switched) channels.

It seems like a lot of work now. Maybe I need new kids to bother me into this stuff again.

The old ones barely even call now.
Top

Gosh. Had a Grebe. Like the old ones.
About that stereo
Top

My wife once remarked that I could turn a $100 antique into a $25 antique in a span of less than a month. I think she was overcritical.
Top

I remember I had an antique radio once. I can't remember if we got it at a garage sale or what. Gigantic cabinet. But it was just a radio after all. Did not include a record player.
A fool thinks himself to be wise, but a wise man knows himself to be a fool.
William Shakespeare
Top

Rob: In the photo you attached, the turntable doesn't really match the vintage of the rest of the piece.

(Does it?)
You can lead them to knowledge, but you can't make them think.
Top

I see there are enormous catalogs online, so yes, but I also read (a long time ago) that now most are cheap and crappy Chinese copies.

As a kid I had a small radio building set with a battery powered triode. It was fascinating to listen to all these mysterious stations blathering in unknown languages. Plus Morse code.

One of my grandmothers had a stylistically similar (in terms of being furniture) radio/phonograph.

It had 2 tone arms, one with each type of needle. Two speeds -- LP and "standard".

When my electrical engineer grandfather gave it to her for an anniversary present, there were no FM stations where they lived (in the Smoky Mountains).

"Yes! A BIG REWARD!" ====> Click here to turn in a sicko
The arc of the moral universe bends towards chaos.
People who believe God or History are on their side provide the chaos.
Top
8 posts • Page 1 of 1