Link: https://twitter.com/davenewworld_2/status/1281939318261665793
The flash of light you saw in the sky was not a UFO. Swamp gas from a weather balloon was trapped in a thermal pocket and reflected the light from Venus.
Top

Love his outfit. Nothing says "take me seriously, motherfucker" like that outfit. 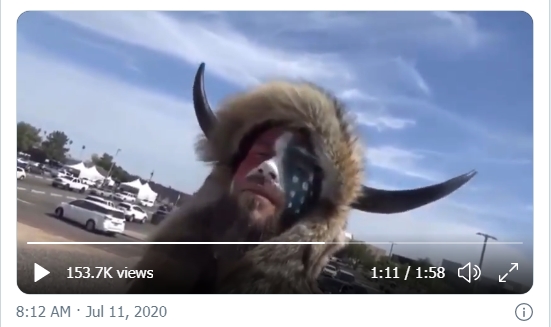 Need to recruit that guy for this forum.
The flash of light you saw in the sky was not a UFO. Swamp gas from a weather balloon was trapped in a thermal pocket and reflected the light from Venus.
Top

I disagree with some of that

Places with crowding needed measures, as evidenced by the huge number of deaths

But based on the way somebody with an actual bad case of the Wuhan flu would feel, people sick with the virus would not be up and about rioting and screaming all night
oh really?
Top

As with so many things, I wonder “is that true?”

If true, a whole train of thought occurs

If it’s fake news, a different train of thoughts


Then the meta train of thought over the huge issue of “ how the fuck can you tell if something is true anymore?”

Chloroquine is effective in preventing the spread of SARS CoV in cell culture.

So a known mechanism was published in 2006

what a surprise
oh really?
Top

I'm afraid I don't follow you. What do you mean by "The Big Brother narrative"?

This was in vitro research on a different virus. Things that work in a petri dish don't always work the same way in actual live human bodies.
A fool thinks himself to be wise, but a wise man knows himself to be a fool.
William Shakespeare
Top

Somewhere a village is missing its idiot
oh really?
Top

The Role of Cognitive Dissonance in the Pandemic (The Atlantic)


Members of Heaven’s Gate, a religious cult, believed that as the Hale-Bopp comet passed by Earth in 1997, a spaceship would be traveling in its wake—ready to take true believers aboard. Several members of the group bought an expensive, high-powered telescope so that they might get a clearer view of the comet. They quickly brought it back and asked for a refund. When the manager asked why, they complained that the telescope was defective, that it didn’t show the spaceship following the comet. A short time later, believing that they would be rescued once they had shed their “earthly containers” (their bodies), all 39 members killed themselves.

Heaven’s Gate followers had a tragically misguided conviction, but it is an example, albeit extreme, of cognitive dissonance, the motivational mechanism that underlies the reluctance to admit mistakes or accept scientific findings—even when those findings can save our lives. This dynamic is playing out during the pandemic among the many people who refuse to wear masks or practice social distancing. Human beings are deeply unwilling to change their minds. And when the facts clash with their preexisting convictions, some people would sooner jeopardize their health and everyone else’s than accept new information or admit to being wrong.

Yes, clearly human behavior is a big factor here.
A fool thinks himself to be wise, but a wise man knows himself to be a fool.
William Shakespeare
Top

I have a theory that fear amplifies the effect, encouraging people's brains to deny threats exist, which is exactly what seems to be happening with Covid. The people most likely to be harmed or cause harm are the ones least likely to follow scientific advice.

One of the strangest things to me was when the pandemic was still ongoing in NZ, all of the people I saw not wearing masks at the supermarket were old white people, and most of them were frail and/or obese - the absolute prime target for death.

Yet the stupid old cunts cling to life, soaking up massive percentages of health dollars, so the dissonance is real and not just a death wish.
Jeff Wagg, Communication and Outreach Manager for the James Randi Educational Foundation posted:

Hang in there dude, someday you can be one of the stupid old cunts clinging to life
Look upon me and despair
Top

Someday? I'm pretty sure the Atheist is already there
oh really?
Top

Nowhere near it. I'm a bit out of shape right now, due to enforced layoff, but my normal routine involves at least 20 hours hard training a week. I'm the fittest and by far the strongest person over the age of 40 I know.

Nope, I'm a strong pro-euthanasia campaigner, have a living will specifying no life support and am the designer of a DIY Exit Bag that I advertise, despite that being highly illegal in this country.

The day it requires more than minimal effort to keep me alive, I'll be setting up a pre-Exit Bag farewell party.
Jeff Wagg, Communication and Outreach Manager for the James Randi Educational Foundation posted:

I found several news reports about it.

A single batch of 512 cases misreported. Is every error malfeasance? I would be more surprised if there were no errors.
"If fighting is sure to result in victory, then you must fight! Sun Tzu said that, and I'd say he knows a little bit more about fighting than you do, pal, because he invented it, and then he perfected it so that no living man could best him in the ring of honor. Then, he used his fight money to buy two of every animal on earth, and then he herded them onto a boat, and then he beat the crap out of every single one. And from that day forward any time a bunch of animals are together in one place it's called a zoo! (Beat) Unless it's a farm!"
--Soldier, TF2
Top

A typo? Someone left out the decimal point?