I am going to lay out a straw man scenario for the progression of this disease. Please fix/ammend as necessary. Dates and rates are somewhat WAGs so fix but provide a reference.

1. The entire population of the country will be exposed to the disease within ~ 1 year (WAG)
2. Of these, 50% will be asymptomatic (Brit study)
3. Within 3 weeks of exposure symptoms, if they are going to appear, will appear.
4. 80% of people with symptoms will not really require medical care. Unless they are pussys.
5. 10% of the population will be sick, really sick. Dr and/or hospitals
6. 2% of the population will die
7. it is unclear what the demographic distribution of deaths will be. "Old" seems to be confounded with "sick with other things". Something other than a Dewey the Dunce analysis is called for. There should be enough data.

A. If you are sick with "something" (not clear what the extent of this is ) AND you get sick (not clear if a preexisting condition increases likelihood of showing symptoms or just likelihood of death) you are a goner like approaching 100%
B. Chicks are more likely to be immune. Evidentially this is known (?) in epidemiology circles. TRUE???? Something about the xx chromosome imparting greater resistance to infection.
C. Impact of environmental temperature and other factors are unknown
About that stereo
Top

I think all of that is reasonable. Number 5 is probably closer to 5%. 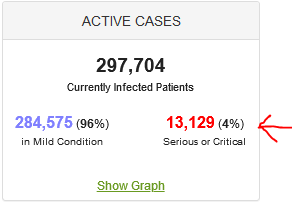 But that's still the real kicker.

How many fully staffed beds do we have?
Top

2 percent of 327 million is about 6.5 million. In a typical year about 2.8 million people die in the US just in normal times. So add those fatalities to 6.5 million and you get 9.3 million deaths.

Hopefully your guess is on the pessimistic side.
A fool thinks himself to be wise, but a wise man knows himself to be a fool.
William Shakespeare
Top

You plan for worst case, generally.

I am also assuming that no drug that is a cure, palliative or preventative is forthcoming. That is probably pretty pessimistic.
About that stereo
Top

At this point the total number of confirmed cases still represents less than 0.01% of the world's population. I'm sure there are many more cases that haven't been detected yet, of course, but at the moment it's still less than half a million. Out of a world population of 7 billion.

The question is whether those numbers continue to increase logarithmically or whether various factors can slow it down. If it does, then we really ain't seen nothing yet. Just the first few raindrops of a coming deluge.
A fool thinks himself to be wise, but a wise man knows himself to be a fool.
William Shakespeare
Top

Off topic... ed's pecker is standard issue but he's not gay...really
... The stars were suns, but so far away they were just little points of light ... The scale of the universe suddenly opened up to me. It was a kind of religious experience. There was a magnificence to it, a grandeur, a scale which has never left me. Never ever left me.
Carl Sagan
Top