What have you been watching lately

Drama queens must check their tiaras at the door.
654 posts

gnome wrote: ↑
Tue Aug 27, 2019 2:46 am
Hulu definitely has its uses for me. The Orville, Letterkenny, HIMYM reruns. It's also my platform for Showtime, as well as HBO since my stupid "smart" TV doesn't have an app for HBO Now. It's this weird thing where you only get the apps they want to put on, and for anything else you "stream" it from your mobile device. Works alright, but it's annoying not to just be able to put an app for it. If it gets too annoying I might just get a Roku or something.

That's why I got my Roku. My "smart tv" is very stupid. It's a Samsung. The app selection is not good, they are very slow to load, and it constantly updates itself, which locks up the tv. I disconnected from the internet and use Roku exclusively. It was a $50 solution worth $hundreds in ease of frustration-free usage.
Top

Same experience as Rob with a Samsung smart TV. I suspect there are technological conflicts between our service provider and the TV. We already had an external Roku system before getting the new TV. Finally gave up an continued using the external system.
Such potential!
Top

Bruce wrote: ↑
Tue Aug 27, 2019 2:49 pm
Same experience as Rob with a Samsung smart TV. I suspect there are technological conflicts between our service provider and the TV.

It wasn't 'your' ISP. Samsung was routing all requests (and in some cases all content) through their own servers. They 'smartly knew' that doing it that way gave them huge access to "your" viewing pleasures, with the accompanying huge value that represented to third parties. But they did it on such a cheap that it prevented functionality; their servers would occasionally slow down, go intermittent, or shut down altogether, thus preventing all, most, or even any functionality. It was infuriating.

I wish you wished I would provide links as proof because I'm too lazy to do that and I love denying anyone anything.

But we can agree, even without links, that it.is.just.bad.
Top

The Dark Crystal TV series.....would be so much better if they made the whole thing CGI. I know they want to honor Jim Henson's memory and create jobs for child molesters and serial killers, but damn, somehow these puppets are even creepier than the original.

I like the prequel expansion of the storyline, which takes place ages after the Skeksies take over, but just before they figure out how to use the Crystal to extract essence and slaughter all the Gelflings. Looks as if the series will end when all 3 nations of Gelflings are dead and the Crystal becomes cracked. So, on top of the nightmare fuel of the puppets themselves, we get to watch a mass genocide. Yay.

The only part that doesn't seem to fit the original story is Ogra. Seems she is a Giaia-like demigod that used to care for the Crystal and the planet, and then the Skeksies arrived and tricked her into turning over control of the Crystal. Doesn't seem to fit her character, which is that of a reclusive troll that cares nothing of the affairs of the world.

No sign of the Mystics either, so that must have something to do with the Crystal becoming cracked. Should be a treat.

See, that's throwing me off. I thought the crackening was what caused the mystics and the Skeksis to split up. So I'm thinking it's already missing that shard?

Oddly, made this on a whim before the show was announced. It was basically a naming and matching exercise.

Fuck. I just discovered Matlock and I like it.

gnome wrote: ↑
Mon Sep 02, 2019 7:52 am
See, that's throwing me off. I thought the crackening was what caused the mystics and the Skeksis to split up. So I'm thinking it's already missing that shard?

As it turns out, you are correct. There are a number a things that don't seem to make sense in the way on continuity though. Why did Ogre trust the Skekies and leave them in charge of the Crystal? It was clear toward the end of the series that she knew about the crackening, knew the relationship between the Skeksies and mystics, knew that the Skeksies were the dark half, knew the Crystal was corrupted, and knew a shard was missing.......and yet she seems truly surprised by everything that happened over the past 100 trine. WTF, Augre??
Such potential!
Top

Started watching Two Sentence Horror Stories. It's not great, but not terrible. Reminds me a little of Tales From the Crypt.
Such potential!
Top

Just finished season 1 of “the boys”. Great stuff. Will be interested to see if they can maintain the quality over multiple seasons.

Spent 90% of the time wanting someone to punch homelander and 10% feeling really sorry for him.
Top

As far as I can tell, Homelander is the only super that is truly evil. The rest are like overly privileged adolescents in grown up super bodies. They never had to depend on anyone their entire lives to survive, so they never developed empathy. Normal humans are no more significant than insects. The horrific scene in the first episode was like a bug hitting the windshield for the super. More of an annoyance than anything.

The series has a potential to decline into depravity just for shock value. I hope it doesn't though.
Such potential!
Top

With the caveat that I've only watched the first episode, I'm hooked already.

Short version is he's a former big shot lawyer who had some kind of trouble (might have a drinking problem). Now he's working as a public defender. But from there it gets more interesting.

It gets a little slow in further episodes. Season two moves at a snail's pace. It's like they fired the original writers and all the replacements had writer's block. Still decent though. Billy Bob is more suited to shows like Fargo.
Top 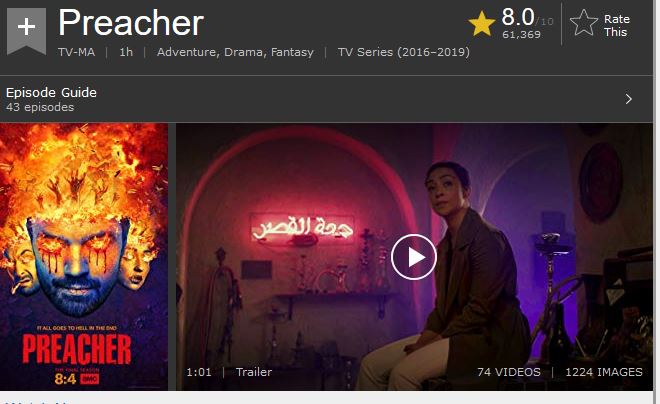 After a supernatural event at his church, a preacher enlists the help of a vampire and his ex to find God.
Creators: Sam Catlin, Evan Goldberg, Seth Rogen
Stars: Dominic Cooper, Joseph Gilgun, Ruth Negga

One trailer of many

ETA: I'm not surprised that new directors are so influenced by Tarantino. He's just too cool.
Top

Great show. It's on AMC not USA network. Haven't watched the last and latest season but all before are great and unique. Although it did drag a bit in New Orleans.
Top

Sturgill Simpson Presents Sound & Fury on Netflix. Essentially it's an album long music video, about 41 minutes. The visuals are presented in different anime styles set against a story taking place in a post-apocalyptic world. It looks and sounds great. Kind of reminded me of Daft Punk's Interstella 5555: The 5tory of the 5ecret 5tar 5ystem in concept. But it's totally it's own, cool thing.


ETA: I'm not surprised that new directors are so influenced by Tarantino. He's just too cool.

It's good overall. I like some of the new characters introduced in Season 2. Herr Starr is a good one. He's just so badass.
A fool thinks himself to be wise, but a wise man knows himself to be a fool.
William Shakespeare
Top

With the caveat that I've only watched the first episode, I'm hooked already.

Short version is he's a former big shot lawyer who had some kind of trouble (might have a drinking problem). Now he's working as a public defender. But from there it gets more interesting.

I've been watching "real time". Am in the middle od S3. A rule of thumb is that if there are long stretches without dialog then they took a 1.5 hr special and stretched it.

That is the case here. I think iy would have made a tight 1.5hr special.
About that stereo
Top
654 posts