Drama queens must check their tiaras at the door.
8 posts • Page 1 of 1 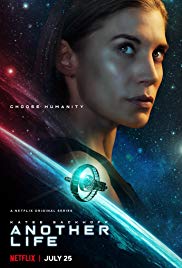 Astronaut Niko Breckenridge and her young crew face unimaginable danger as they go on a high-risk mission to explore the genesis of an alien artifact.

Netflix must be really, really hurting for writers and actors. I'm not saying the series isn't a nailbiter but I got so bored I trimmed my toenails to break the way-overly-melodramatic tedium.

Was Nick Cage in it?
This space for let
Top

Well, that's disappointing. Did you make it past the first episode?

There's lots of questionable science aspects, but I guess no more so than Star Trek. You can't really expect to enjoy Science Fiction if you get too hung up on the "science" part.
A fool thinks himself to be wise, but a wise man knows himself to be a fool.
William Shakespeare
Top

Anyway, I started watching it too, yesterday, but I'm not really feeling into it either.

Most of the characters seem like shallow assholes. Like the girl who thinks that nobody should live past 27. What's with that garbage?
A fool thinks himself to be wise, but a wise man knows himself to be a fool.
William Shakespeare
Top

She listens to very overrated music.

South Park did an episode on the insanity of Netflix buying any and every indie film and TV series. It was pretty accurate. I couldn't find a single gem in the last new wave pile of rubble..
Such potential!
Top

Most of the characters seem like shallow assholes. Like the girl who thinks that nobody should live past 27. What's with that garbage?

Technology has made 500 channels possible. That does not say anything at all as to content popularity. Just ignore the shit and perhaps it will go away. I'm still waiting for the "All The DumbShit Stuff Trump Says" channel. Or, is that just called MSNBC?

Watched a couple of episodes.

You would think that a nation that sends folks up to save the world, who are well trained and competent, would make damn sure that they knew the meaning of the word "discipline", wouldn't you?

"Hey what the fuck, lets take out helmets off"

Zero discipline. In real life they'd all be dead.

This is like a high school collaborative drama club effort.

Really painful to watch.
This space for let
Top
8 posts • Page 1 of 1