That would be funny.
Top


Nike reported quarterly earnings and revenue on Thursday that beat analysts' expectations.
Shares of the company were up 8 percent in premarket trading.
Nike said revenue grew in nearly every category, with footwear and apparel seeing growth in the double digits globally.

The Portland, Oregon-based sneaker maker on Thursday reported an unexpected quarterly net loss and a sales decline of 38% year-over-year, as its business was hurt from its stores being shut temporarily, and online revenue was not enough to make up for that.

Its inventories also piled up, weighing on profits, as its wholesale partners such as department stores also had their shops shut and took in fewer orders for shoes and clothes.

Nike shares were recently down around 4% in after-hours trading.

Here’s how Nike did during its fiscal fourth quarter:

Total revenue was down 38% to $6.31 billion from $10.18 billion a year ago. Sales in North America were down 46%, while sales in China were down just 3%, with many of Nike’s stores in that region reopening sooner during the pandemic than in the U.S.

They're trying to blame the Wuhan virus, but even with that analysts expected earnings of 7 cents a share. They are wildly underperforming.

Get woke, go broke.
Do you have questions about God?

Look what I found (note the full date). 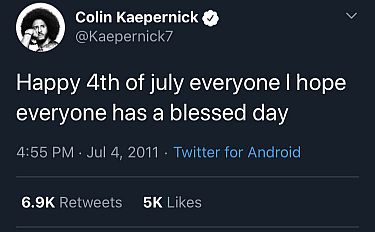 I want him to win.

I also think the NFL is evil and must be destroyed.

For entirely unrelated reasons, but this will help.

"Yes! A BIG REWARD!" ====> Click here to turn in a sicko
The arc of the moral universe bends towards chaos.
People who believe God or History are on their side provide the chaos.
Top
144 posts