How can we expose more people to critical thinking?
70 posts

I predict it will be over by Tuesday, maybe sooner if he comes across a Labor Day cookout.
"It is not I who is mad! It is I who is crazy!" -- Ren Hoek

Comment on a recent letter from the dean of students at the University of Chicago to freshmen.

Robert Fulford: Trigger warning — the meek may find this offensive


This widespread situation has led the University of Chicago to expressly declare that it wants to separate itself from timorous, self-satisfied discourse. The dean of students, John Ellison, has written to the freshmen in the incoming class of 2020, informing them that UChicago doesn’t go along with certain popular trends.

“Our commitment to academic freedom means that we do not support so-called trigger warnings, we do not cancel invited speakers because their topics might prove controversial and we do not condone the creation of intellectual ‘safe spaces’ where individuals can retreat from ideas and perspectives at odds with their own,” Ellison wrote. “Freedom of expression does not mean the freedom to harass or threaten others.”

Among the students who commented on the letter, one wrote: “FINALLY FINALLY FINALLY…….A College that fights back.” There were those, however, who suggested that Ellison was trying to appease donors to the university. It’s been reported that some of them, appalled by the atmosphere on campus, have withheld their grants.

Three embarrassing incidents at the university demonstrated the problem. In February, Anita Alvarez, the Cook County state’s attorney, was forced to end a lecture because members of Black Lives Matter chanted and waved signs while she was talking. On the following day, university police had to break up a riot when Bassem Eid, a critic of anti-Israel boycotts, was speaking. In April, members of the Armenian Students Association interrupted a talk by a scholar who denies the Armenian genocide.

The Ellison letter grew out of a faculty committee on freedom of expression, chaired by Geoffrey R. Stone, a law professor. Stone believes, “It is not the proper role of the university to attempt to shield individuals from ideas and opinions they find unwelcome, disagreeable or even deeply offensive.”

And they'll have to pore again over books and courses. Inhuman!

I'm shocked that they would expect cheerleaders to look a certain way! This is patriarchy! 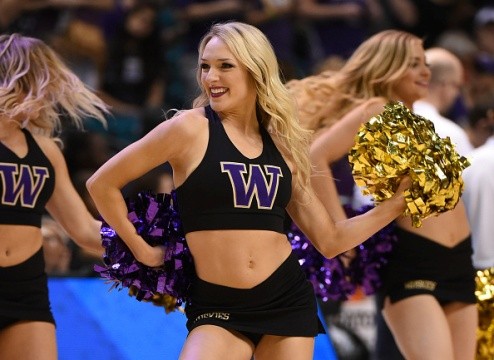 The infographic "Cheer and Dance Tryout Look" was posted by the University of Washington cheerleading team for their upcoming tryouts. The team received backlash from students and other critics who said that the poster was sexist as it told women to look a certain way to qualify.

Some students complained that the cheerleader checklist poster undermined the seriousness of cheerleading as a real sport, Daily Mail notes. Some said that as students of color, they felt excluded as they do not embody the descriptions of the checklist that specifically asked for "bronzed or tanned" looks.

The Associated Students of the University of Washington posted on their Facebook page to say that the old cheerleader checklist goes against the prevention of objectification of women that many students and women worked so hard for. They promised to maintain an inclusive environment for all and hopes for the university administration to do the same. People Magazine reports that Washington State University and Louisiana State University had similar cheerleader checklist posters. After the controversy, Louisiana State had removed theirs.

We might at least expect them not to make freight trains take dirt roads... dayum!
You can lead them to knowledge, but you can't make them think.
Top


It is a story of war between two nations, the conflict of love rivals and the looming fate of death.

But the antagonistic themes of Aida seem to have spilled into the wings after a student production of Giuseppe Verdi’s opera was cancelled amid a row over suggestions of “cultural appropriation”.

A theatre at the University of Bristol said yesterday it had cancelled all showings after a revolt by students.

It is understood that there were protests amid fears that white students would be cast as leads and expected to portray Ancient Egyptians and slaves.

The opera centres around an Ethiopian princess, Aida, who is held prisoner in Egypt, where she serves as a slave but falls in love with an Egyptian general.

(Just a note on Cleopatra: She was a Macedonian Greek, she ruled Egypt in the city of Alexandria because Alexander the Great had conquered Egypt. This student seems to think Cleopatra was an Egyptian.)


However, critics said the decision by Music Theatre Bristol (MTB), was “laughable” and amounted to “outrageous” censorship.

Rupert Christiansen, the Telegraph opera critic, said: “Where will the mealy-mouthed nonsense peddled by ideologues in Bristol stop? If something doesn’t laugh it to extinction, Verdi’s entire oeuvre could fall under the axe.”

In its statement, the theatre said: “It is with great sadness that we are announcing the cancellation of Aida in this year’s MTB show calendar.

“This show that was voted in by our members has since caused controversy in terms of racial diversity.

“It is a great shame that we have had to cancel this show as, of course, we would not want to cause offence in any way, and that was certainly never our intention. Our intention was to tell this story, one which surely is better heard than not performed at all.”

Academics said they were “saddened” by the decision to cancel the production.

Daniel Snowman, author of a book on the social history of opera and a biography of Verdi, said this "kind of censorship is outrageous. Absolutely categorically Aida should not be banned.

This "cultural appropriation" nonsense has now reached ridiculous levels.
A fool thinks himself to be wise, but a wise man knows himself to be a fool.
William Shakespeare
Top

Cleopatra was a BLACK Egyptian is a religious doctrine, not just an historical misapprehension.

Not so much political correctness as infantilization.

Time to revive this thread.

That's a curious headline but this survey isn't about the weather, it's about whether students feel safe because a dean of something or other is lawyering for Harvey Weinstein. Does this create a hostile "climate" for students?

The survey asks students a series of questions about whether they feel welcome in the House. It also asks them to score Winthrop on a five-point scale based on whether they believe the House is “hostile” or “friendly,” “contentious” or “collegial,” and “sexist” or “non-sexist,” among other metrics.

USD law school: Hawaiian Day party is offensive. Hawaiian state rep: No it's not.
The University of South Dakota allegedly pressured the Student Bar Association to change the name of its event from “Hawaiian day” to “Beach Day.” However, after first keeping leis in the program, USD later advised against wearing them, calling them “culturally insensitive.”

Now, a Hawaii state representative is accusing some at USD of having “their head stuck in a snowbank.”

Hawaii state Rep. Bob McDermott commented on the situation in a letter to the editor published by the University of South Dakota's school newspaper, The Volante, and claimed that usage of the leis is not offensive, but honorable.

“The lei is a symbol of our Aloha spirit in Hawaii, inclusive and welcoming," McDermott said. "One individual’s objection to its use at a festive event is both patronizing and an insult to our island tradition."

“It is also a demonstration of ignorance about the cultural significance of the lei," the state representative added.

McDermott continued by saying that the lei is typically used during joyous events and parties and that states and other parties, like the USD Student Bar Association, are welcome to participate in the tradition.

USD president Sheila Gestring said that USD has opened an investigation to determine if the law school interim administration broke the Board of Regents policy on free speech and intellectual diversity.