Fukushima one year on

Patience Listy, patience.
You can lead them to knowledge, but you can't make them think.
Top

Thousands of spent fuel rods, crammed into cooling pools at the plant, melt and mix with concrete, then fall to the lower level of the buildings.

CHAIN OF EVENTS
In a possible domino effect, a hydrogen explosion at one reactor forces workers to evacuate due to high levels of radiation, halting cooling operations at all reactors and spent fuel pools. Reactors and cooling pools suffer serious damage and radiation leaks.


The brutal reality of the situation in March 2011 was that it was no longer a question of managing a crisis, applying established procedures or rolling out plan A or plan B. Day after agonising day, the Fukushima Daiichi power plant was an island, plunged into darkness, without electricity or emergency diesel generators, and almost completely devoid of resources.

Largely left to their own devices, Yoshida and the plant's staff risked their lives at every moment. Wearing stiflingly hot protective wear and buffeted by aftershocks, they searched for slightest sound or visual clue in the absence of measurement data. Groping around the labyrinth of the ruined plant, they sought, more or less with success, to protect themselves from radioactive contamination in order to continue their work.

During the hearings, Yoshida confided his fears, doubts and beliefs. He lauded the commitment of his colleagues inside the plant, even as he deplored the absence or incompetence of those outside – Tepco headquarters, the government, the regulatory authority, and so on.

The emotional intensity of his account is both striking and moving. It shatters the all-too-bureaucratic certitudes that underestimate the complexities of situations, to the point of ignoring our humanity: the workers were facing the possibility of their own deaths and, above all, the deaths of their colleagues, their families and everything dear to them.

Almost miraculously, after four days of desperate efforts, the worst – the explosion of the Daiichi reactors, which could have set off those at the close-by Daini and Onagawa plants as well – was narrowly avoided. Yet we have learnt almost nothing from this catastrophe, and the much larger one that was averted.]/quote]
https://phys.org/news/2018-03-fukushima ... e.html#jCp

Britain's The Telegraph has obtained new leaked cables from WikiLeaks that reveal the International Atomic Agency warned Japan in 2008 that their nuclear plants were ill-prepared to handle a major earthquake.

They told Japan that their plants were "out of date" and would cause "serious problems" if faced with a strong earthquake.

It was that really great idea of putting the backup power generators in the basement so's the tidal wave could more easily drown them.

But if they put them on the top of the building, they would have fallen over and Japan could have capsized.

True that. Center of gravity and all that.
You can lead them to knowledge, but you can't make them think.
Top

Somehow on my Twitter feed all kinds of Fukushima related shit just showed up today. Serious whistleblower, scientific expert warnings and shit like that. It was a bit disturbing, so I did what all good sheeple do. I just ignored it and asked aloud, "How many died?", and then forgot all about it.
oh really?
Top

So what was the answer? Was it 1?
Top

It is what happens on Twat'er from time to time. Old news resurfaces as new ... news.

However, one of the plant cleanup workers dropped dead about a week ago from a heart attack. No connection to radiation exposure has been established so, as you were.
You can lead them to knowledge, but you can't make them think.
Top 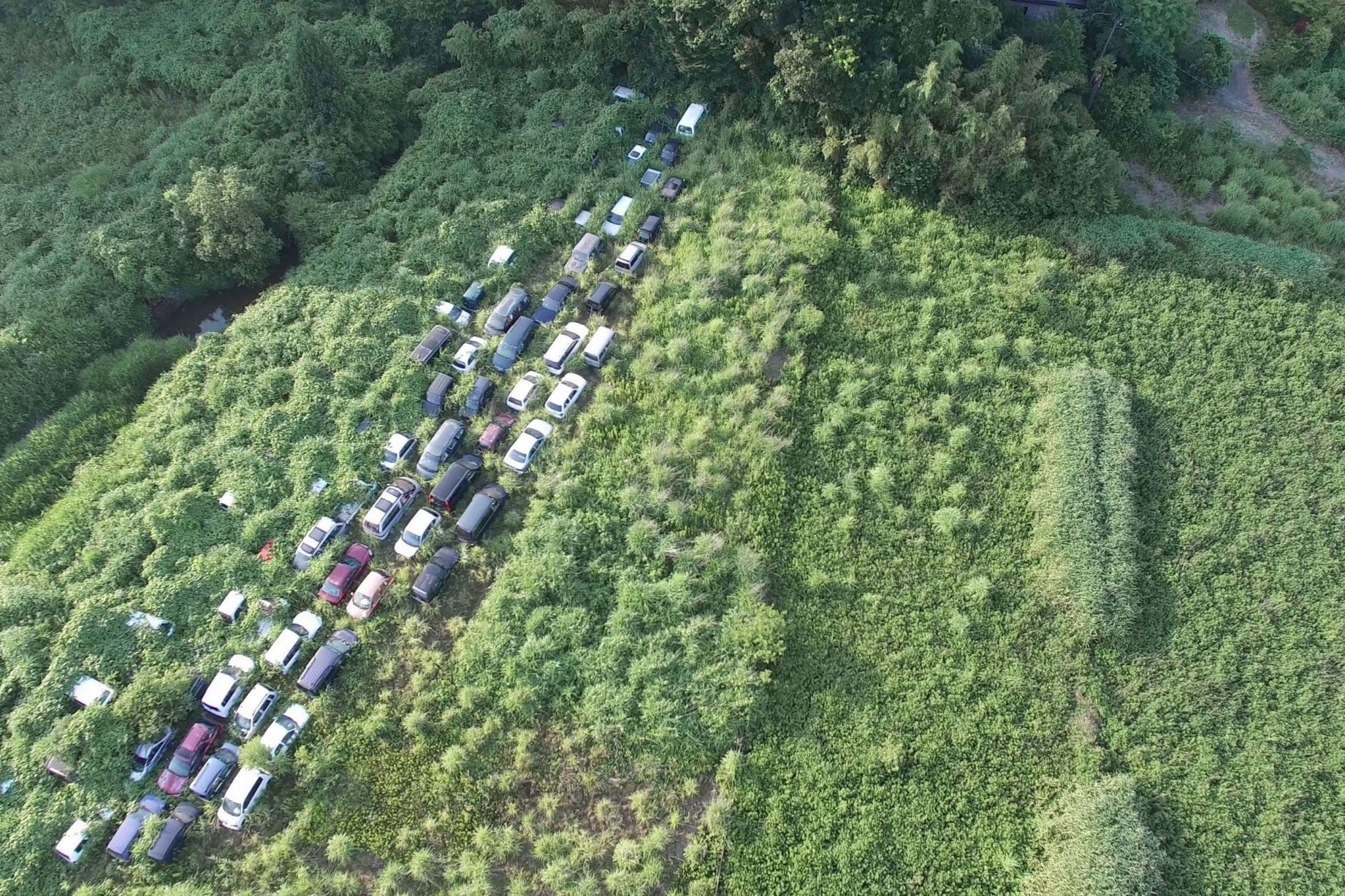 Wait.
You can lead them to knowledge, but you can't make them think.
Top

TOKYO -- The government and Tokyo Electric Power Co. (TEPCO) are set to launch full-scale probes of the inside of the No. 1 through No. 3 reactors at the disaster-stricken Fukushima Daiichi Nuclear Power Station this fiscal year, in an attempt to determine which reactor to work on first to remove fuel debris -- a critical step for decommissioning the facility.

However, the interior of the No. 2 reactor, which is most likely to be the first to go through the debris removal process, has turned out to be different from what had originally been expected, underscoring the difficulties entailing the removal work. Since many companies are involved in the process, how to pass down the know-how acquired over the course of the more than 30 year-decommissioning process also poses a challenge.

"At present, it is difficult to clearly say we are going to remove all fuel debris," said Akira Ono, who leads the decommissioning project, at a regular press conference by TEPCO on March 28, while noting that the utility will not back down from its ultimate goal of full debris removal.

Nobody, not the Japanese, or the Americans, nor the Chinese will ever solve the problem. Not on your lifetime, and not in your grandkids lifetimes.

Nobody has solved the "easy" problem, what to do with the relatively safe spent fuel rods. And all the worlds nuclear powers have had 70 years to do so. Melted fuel mixed with debris at the bottom of a disaster, and just one reactor with no ruined containment building, is also a problem not solved.

Multiple reactors and buildings? Maybe in a hundred years some progress will be made. But nobody alive will ever see it.

It's exactly the much feared scenario that caused the US to fail in building any more reactors, the very real possibility that just one reactor would fail, and in the worst possible way. After 30 years the other disaster is still not even close to being "fixed", and this is a melted reactor with fuel that can be observed.
https://en.wikipedia.org/wiki/Chernobyl ... is_removal

Of course the nuclear moonbats don't give a fuck, because reality has never been an obstacle to a true believer, no matter what the noble cause.
oh really?
Top

In case that's too complicated, consider Three Mile Island. There is an intact but radioactive building, that isn't even in the planning stages for repairing the problem.

40 years later and the ruined radioactive building is still there. And this was a minor meltdown compared to Chernobyl. Four ruined reactor buildings and three melted cores is beyond anything even the worst case scenarios ever danced around.
oh really?
Top

Failure with the (relatively speaking) primitive solid fuel reactors doesn't mean we should give up on nuclear. LFTR shows a lot of promise. Yes, there are problems to overcome, but the overall concept is very compelling.
You can lead them to knowledge, but you can't make them think.
Top

Removal of fuel in pool at Fukushima’s melted reactor begins

TOKYO (AP) — The operator of the tsunami-wrecked Fukushima nuclear plant began removing fuel Monday from a cooling pool at one of three reactors that melted down in the 2011 disaster, a milestone in what will be a decades-long process to decommission the facility.

Tokyo Electric Power Co. said workers started removing the first of 566 used and unused fuel units stored in the pool at Unit 3. The fuel units in the pool located high up in reactor buildings are intact despite the disaster, but the pools are not enclosed, so removing the units to safer ground is crucial to avoid disaster in case of another major earthquake similar to the one that caused the 2011 tsunami.

TEPCO says the removal at Unit 3 will take two years, followed by the two other reactors, where about 1,000 fuel units remain in the storage pools.

Removing fuel units from the cooling pools comes ahead of the real challenge of removing melted fuel from inside the reactors, but details of how that might be done are still largely unknown. Removing the fuel in the cooling pools was delayed more than four years by mishaps, high radiation and radioactive debris from an explosion that occurred at the time of the reactor meltdowns, underscoring the difficulties that remain.

"The work is carried out remotely from a control room about 500 meters (yards) away because of still-high radiation levels inside the reactor building that houses the pool."
oh really?
Top
582 posts