Shot at 35mm Focal length with Tamron 28-70 and Sony A7S You can make out the Nebulae (Omega, Eagle, Trifid, Lagoon etc.,) as well as Milky Way core. The bright object is Jupiter, and to the right is Rho Oph Cloud complex.

The Galactic Center in Radio from MeerKAT 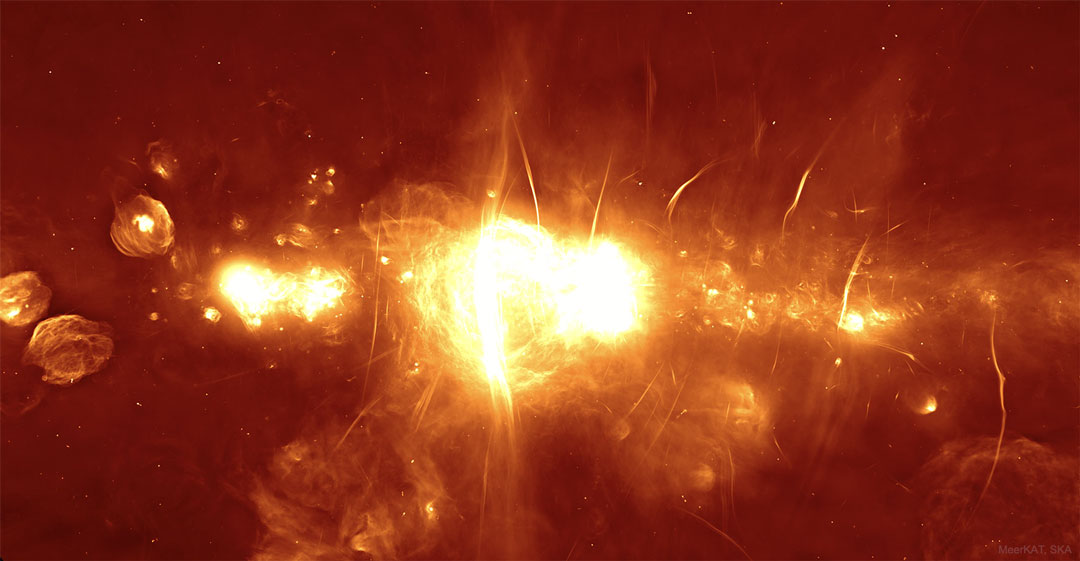 Explanation: What's happening at the center of our galaxy? It's hard to tell with optical telescopes since visible light is blocked by intervening interstellar dust. In other bands of light, though, such as radio, the galactic center can be imaged and shows itself to be quite an interesting and active place. The featured picture shows the inaugural image of the MeerKAT array of 64 radio dishes just completed in South Africa. Spanning four times the angular size of the Moon (2 degrees), the image is impressively vast, deep, and detailed. Many known sources are shown in clear detail, including many with a prefix of Sgr, since the Galactic Center is in the direction of the constellation Sagittarius. In our Galaxy's Center lies Sgr A, found here just to the right of the image center, which houses the Milky Way's central supermassive black hole. Other sources in the image are not as well understood, including the Arc, just to the left of Sgr A, and numerous filamentary threads. Goals for MeerKAT include searching for radio emission from neutral hydrogen emitted in a much younger universe and brief but distant radio flashes.


And combined with Chandra's X-rays: 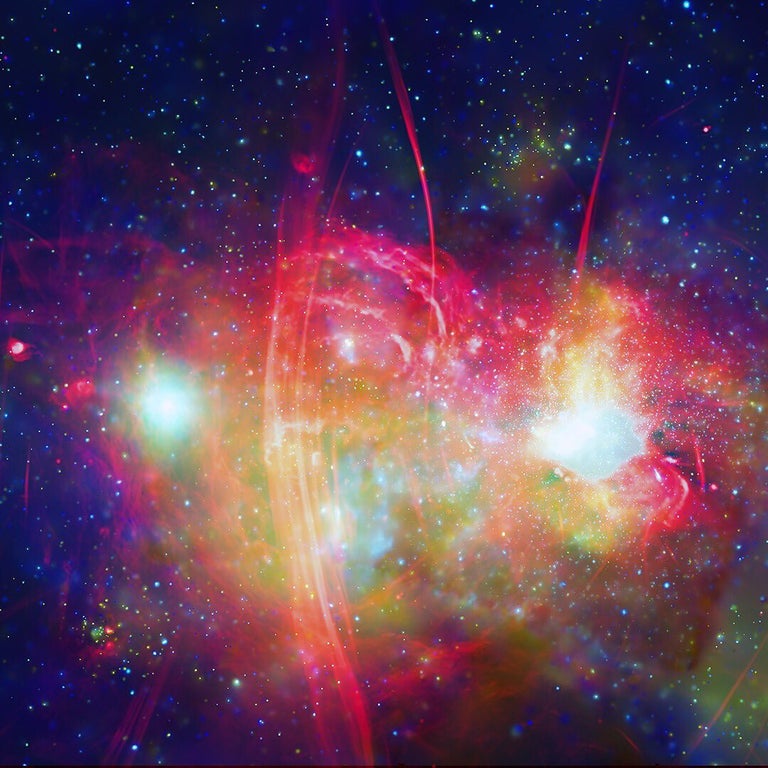 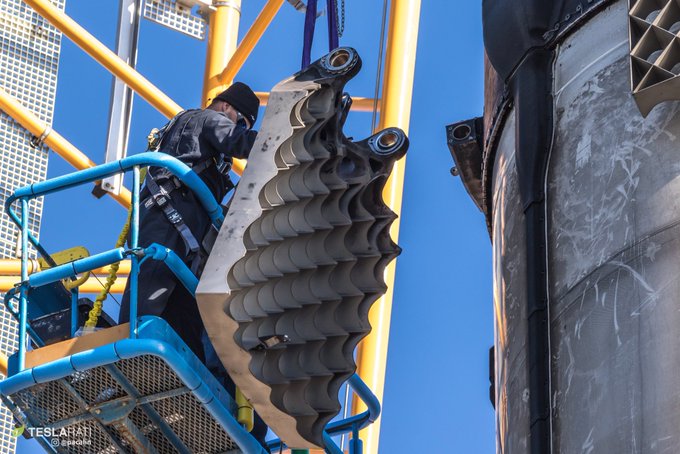 He's probably just reversing the flow of time to make it look like the rockets are landing vertically.

That would be the simpler explanation. One of these days I will have to look up how that layers remain pretty much intact. 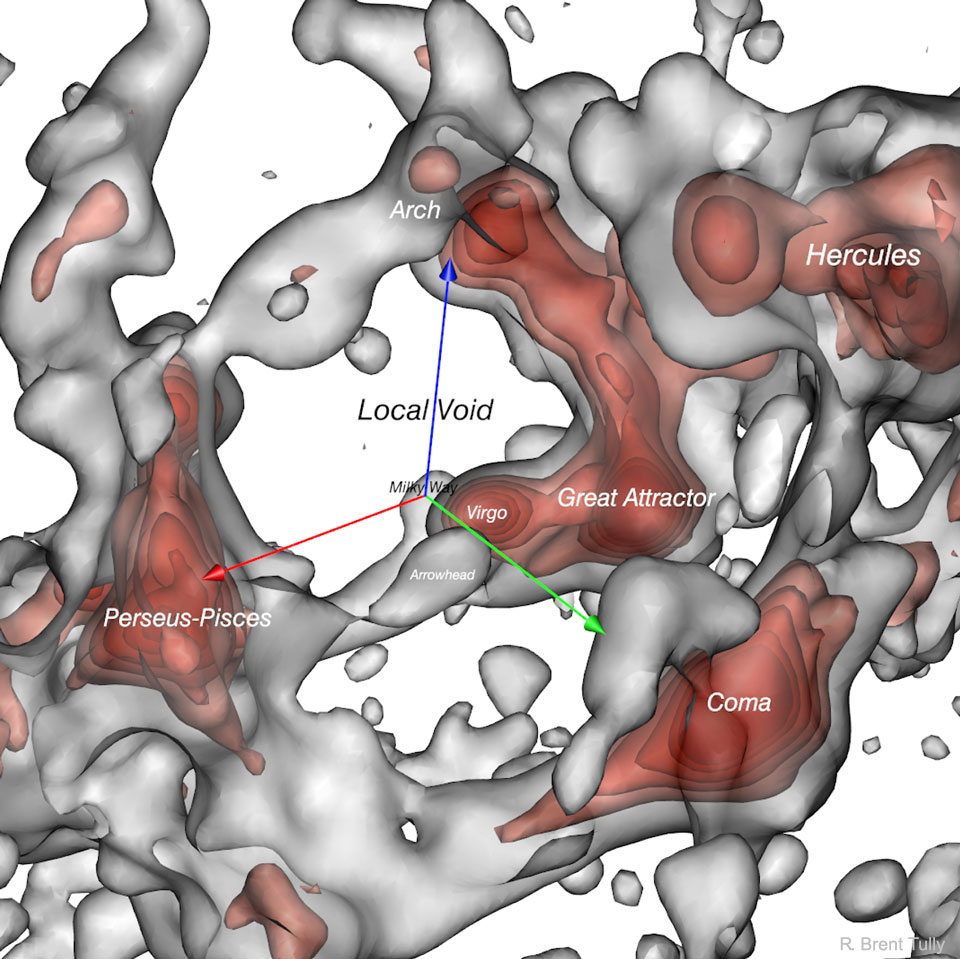 Explanation: What does our region of the Universe look like? Since galaxies are so spread out over the sky, and since our Milky Way Galaxy blocks part of the distant sky, it has been hard to tell. A new map has been made, however, using large-scale galaxy motions to infer what massive objects must be gravitating in the nearby universe. The featured map, spanning over 600 million light years on a side, shows that our Milky Way Galaxy is on the edge of the Virgo Cluster of Galaxies, which is connected to the Great Attractor -- an even larger grouping of galaxies. Also nearby are the massive Coma Cluster and the extensive Perseus-Pisces Supercluster. Conversely, we are also on the edge of huge region nearly empty of galaxies known as the Local Void. The repulsive push by the Local Void combined with the gravitational pull toward the elevated galaxy density on the other side of the sky explains part of the mysteriously high speed our Galaxy has relative to the cosmic microwave background -- but not all. To explore the local universe yourself, as determined by Cosmicflows-3, you are invited to zoom in and spin around this interactive 3D visualization.

The universe is so fucking big! Almost as big as Gram's mom's cunt!
"It is not I who is mad! It is I who is crazy!" -- Ren Hoek

That's a big one!
Such potential!
Top 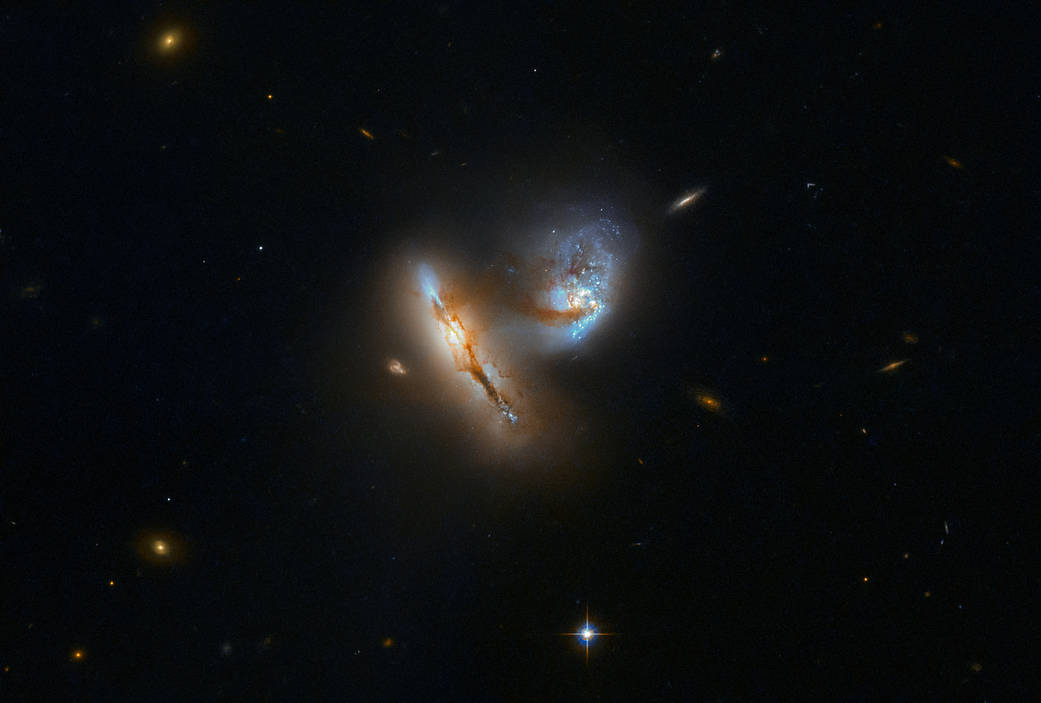 This galactic duo is known as UGC 2369. The galaxies are interacting, meaning that their mutual gravitational attraction is pulling them closer and closer together and distorting their shapes in the process.

And here's Saturn behind the Moon: 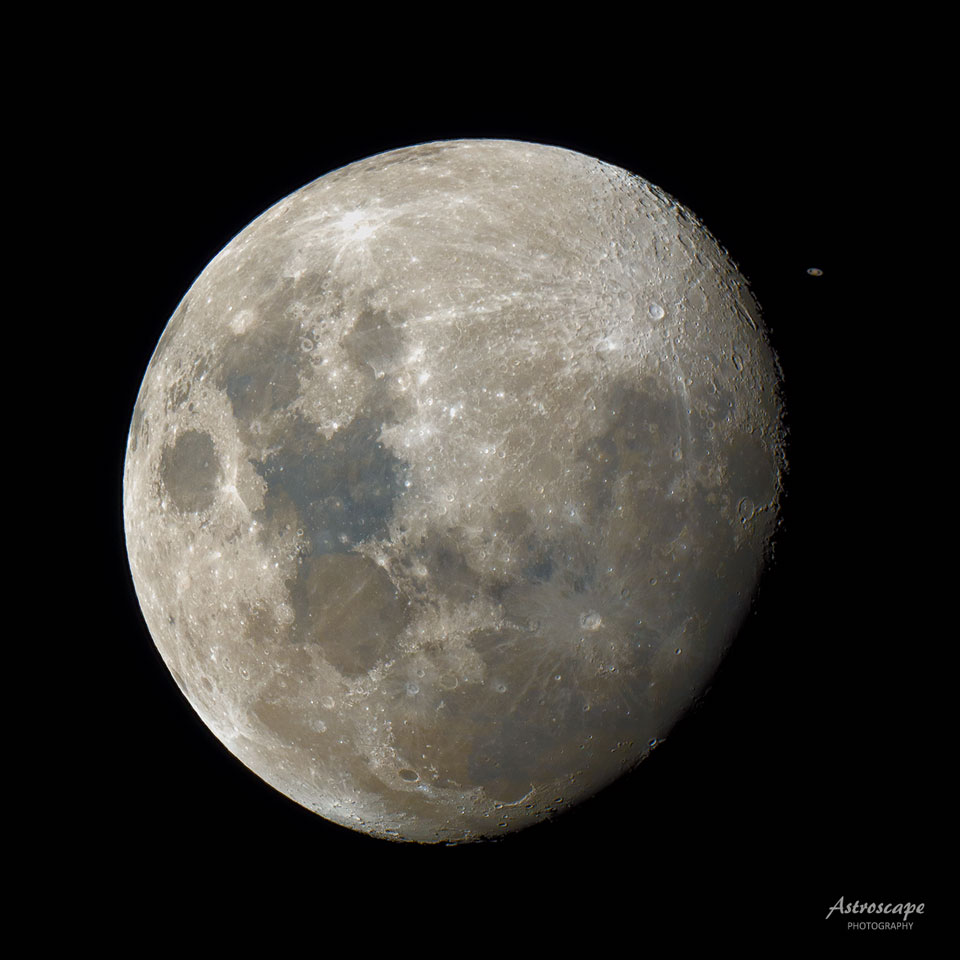 
As we're at it, another pic I took ~ 2 months ago, just before full Moon: 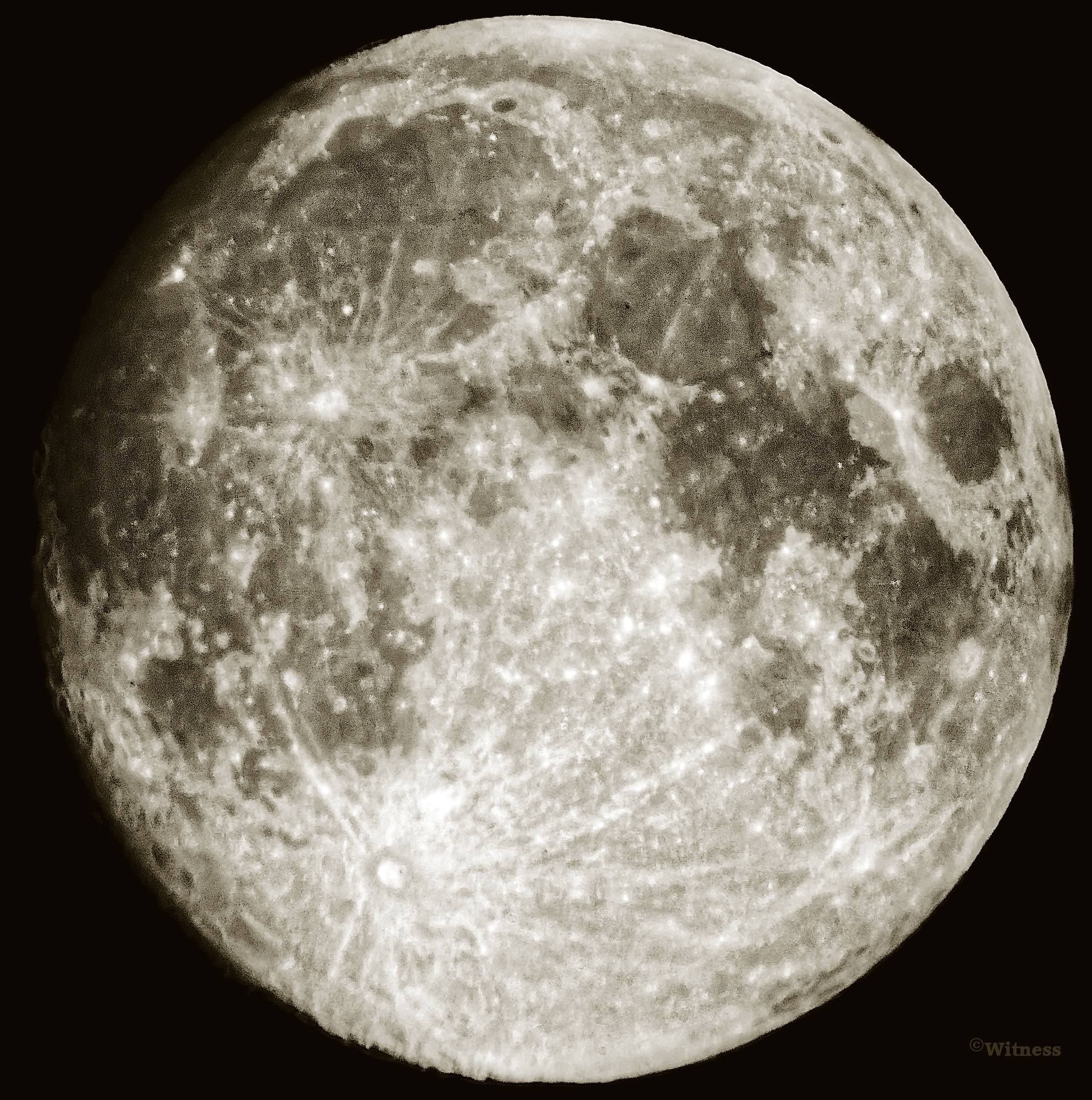 It seems badly in need of repair.
... The stars were suns, but so far away they were just little points of light ... The scale of the universe suddenly opened up to me. It was a kind of religious experience. There was a magnificence to it, a grandeur, a scale which has never left me. Never ever left me.
Carl Sagan
Top

That'll buff out.
Such potential!
Top

An old Death Star, has seen many battles. 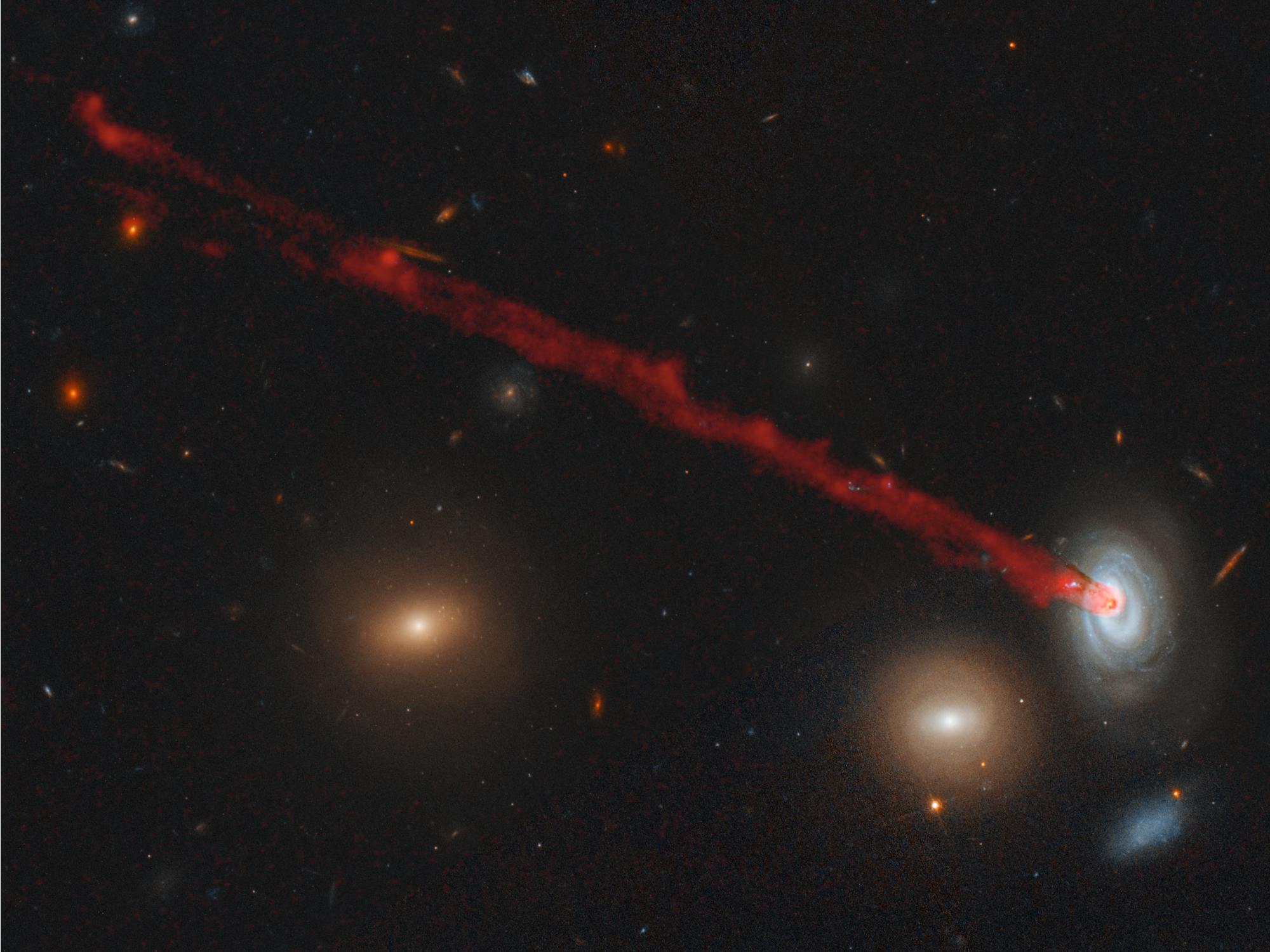 The narrow funnel-shaped feature emanating from the galaxy's center is the red glow of hydrogen gas. This glowing tail extends for nearly 200,000 light-years, but the pencil-like structure is comparatively narrow – only 7,000 light-years wide. The tail's clean edges and smooth structure suggests that magnetic fields play a prominent role in shaping it.

Hubble's sharp vision uncovered the blue, glowing clumps of young stars in the tail. The brightest clump, near the middle of the tail [the blue feature], contains at least 200,000 stars, triggered by the ongoing gas loss from the galaxy.

The gas-loss process occurs when a galaxy, due to the pull of gravity, falls toward the dense center of a massive cluster of thousands of galaxies. During its plunge, the galaxy plows through intergalactic material, like a boat moving through water. This material pushes gas and dust out of the galaxy. Once the galaxy loses all of its gas – its star-making fuel – it can no longer create new stars. The gas-stripping process in D100 began roughly 300 million years ago.

The reddish galaxies in the image contain older stars between the ages of 500 million to 13 billion years old. One of those galaxies is D99, just below and to the left of D100. It was stripped of its gas by the same process as the one that is siphoning gas from D100. The blue galaxies contain a mixture of young and old stars. Some of the stars are less than 500 million years old.

The Coma cluster is located 330 million light-years from Earth.

This image is a blend of several exposures taken in visible light between May 10 and July 10, 2016, and November 2017 to January 2018, by Hubble's Advanced Camera for Surveys. Researchers overlaid an image of the glowing, red, hydrogen tail, taken in visible light between April 28 and May 3, 2006, by the Subaru Telescope's Subaru Prime Focus Camera (Suprime-Cam) in Hawaii.

I think it is not hydrogen gas. I think it is some sort of sulfur compound. Every other galaxy knows who dealt it.
Top

Fly over the Moon:

I found fascinating how different the various craters are, once you look at the details of their structure.
Top 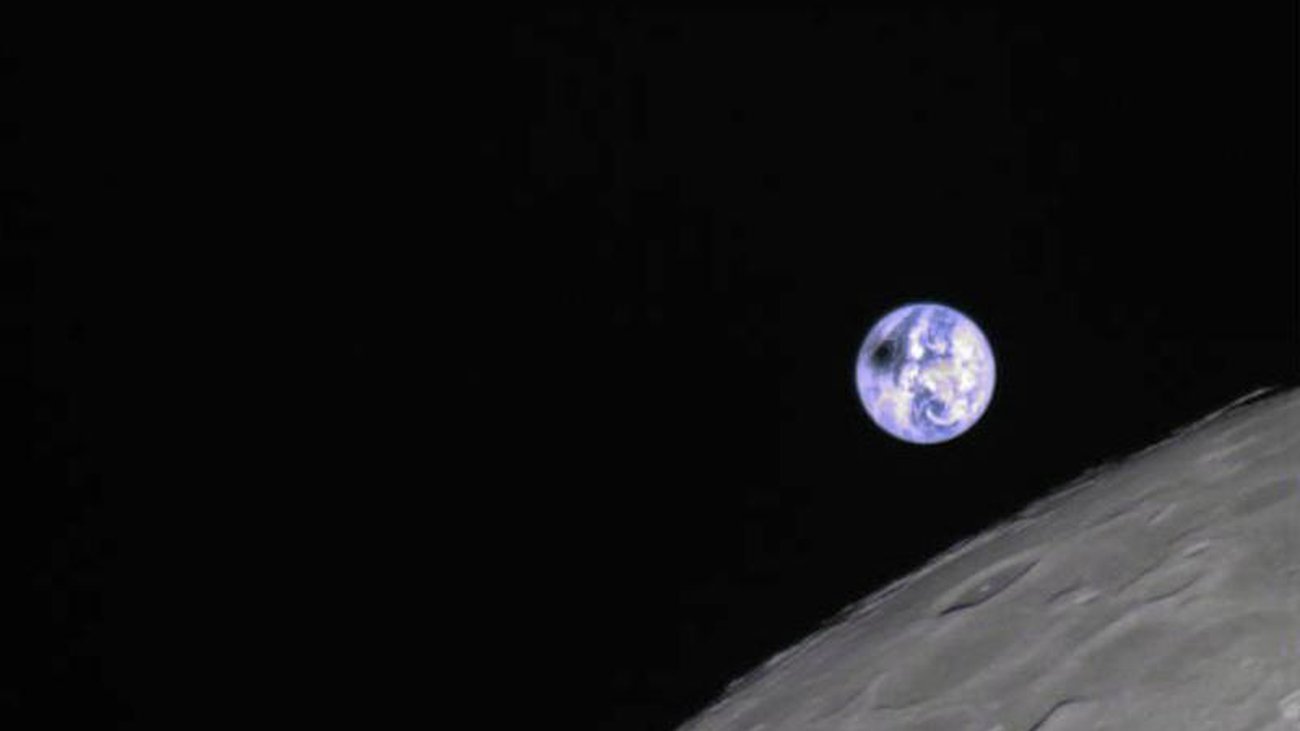 Sörup (dpa) - An amateur radio from Schleswig-Holstein has published a spectacular photo of a solar eclipse from the moon perspective, which was made by a Chinese satellite.

The photo shows in the foreground the craters of the rugged back of the moon and in the background the blue earth with a black spot top left. Earlier, the "Bild" newspaper reported on it.

The photo was taken on 2 July and shows the solar eclipse over the Pacific with Chile, said Kühn the German press agency. It was recorded by the Chinese satellite "Longjiang 2" - and the command to download the image came from the 70-year-old amateur radio Reinhard Kühn from Sörup near Flensburg.

The former banker, who has been a passionate amateur radio operator for 50 years, has been working with the Chinese since mid-2018. "They've realized they need someone who can make the uplink when the moon is no longer visible in China," he said.

For the Chinese satellite, Kühn of the Harbin Institute of Technology in China, under his project manager Wei Mingchuan, received a database of commands that he can broadcast via his antenna. So he could also give the order for download. The photo was then received via the Dwingeloo Radio Telescope in the Netherlands and from Chinese stations.

Tammo Jan Dijkema from the Camras Foundation, which operates the Dwingeloo Radio Telescope, confirmed the download. He had operated the telescope when the photo was downloaded from the satellite, he told the dpa. The co-rights to the picture has earned Kühn so - with his callsign DK5LA he stands under it.