This is our lounge area. Feel free to come in and get acquainted!
168 posts

Busses are a very very dangerous means of transport. Particularly if they are a) in third world countries and b) are travering mountainous roads.

This thread will be a repsitory for reports of busses plunging to their doom.

#1 38 People Killed as Bus Plunges Off Highway in Italy


ROME — At least 38 passengers died and more than 10 were seriously injured, including children, when a bus plunged off a viaduct on a treacherous stretch of mountainous highway in the Campania region of southern Italy on Sunday night, officials told Italian media. 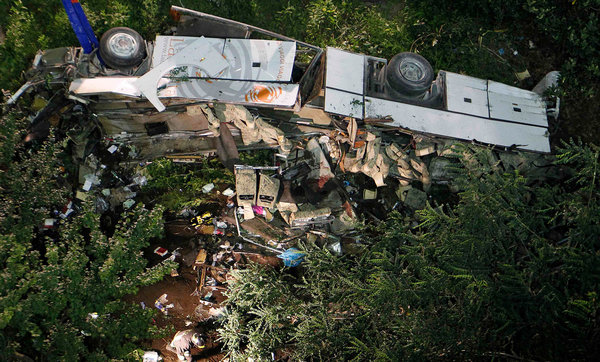 n.b.b.b. Pardon the rules but I know you lot.


A youth pastor and his pregnant wife were among the three people killed when a bus overturned Saturday afternoon in Indiana, a deacon from the pastor's church said Sunday. The bus was returning from a camp in Michigan, said Indianapolis Mayor Greg Ballard

ETA: numbering per ed.
Last edited by grayman on Mon Jul 29, 2013 2:01 pm, edited 2 times in total.
You will be electroplated. Resistance is potential divided by current! - Dr. Matt

Please number your submissions. Thank you.
About that stereo
Top

does bus 'flipping' count, or must it literally 'plunge'? Must it be from this point on or is there a 24 hour prorated grace period?

If flipping counts and there is a 24 hour prorated window ...

(AP) – A bus plunged into a deep river canyon in northwestern Guatemala today, leaving at least 44 people dead, according to officials. An additional 46 people were injured and taken to hospitals, says Mario Cruz, a spokesman for the volunteer fire department in the area. At the accident site, medical personnel were conducting autopsies on the dead, which showed multiple injuries. Cruz says about 90 people were aboard the Guatemala City-bound bus, which had an official capacity of 54 passengers. The dead included at least three babies.

The bus fell into a river at the bottom of the 600-foot canyon around 8:15am in the town of San Martin Jilotepeque, apparently after the driver lost control on a curve. "From what we see, the bus crashed against a wall of rocks first and then fell into the cliff," says the local mayor. The area has mostly dirt roads that wind through steep mountains without guardrails or other safety measures

I thought this thread would be about ed plunging busses up his humungous ass. A new sexual practice only available to divinities.
Shit happens. The older you get, the more often shit happens. So you have to try not to give a shit even when you do. Because, if you give too many shits, you've created your own shit creek and there's no way out other than swimming through the shit. Oh, and fuck.
Top

I've lost track of how many vehicles I've watched go around the gates because they're willing to risk their lives (and their passengers) to save a few moments drive time. Dammit!


A double-decker bus collided with a passenger train in Canada's capital Wednesday, ripping off the front of the bus and killing six people, police said. Witnesses said the bus went through a closed crossing barrier, and passengers said they screamed "Stop, stop!" at the driver just before impact. 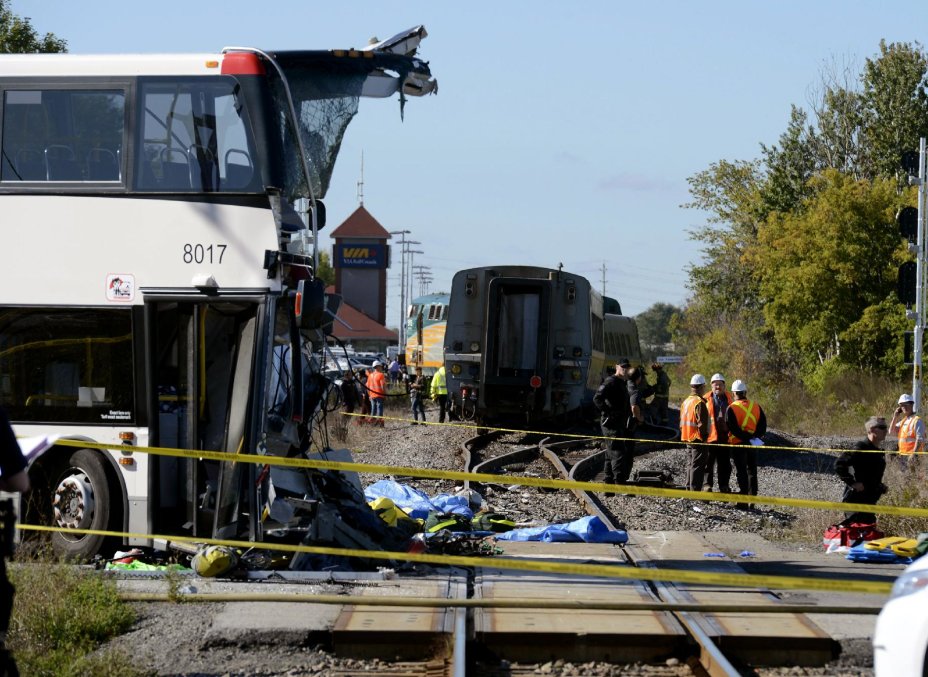 ETA: Yes I know we don't know why the driver ran the gate. This sort of thing still concerns me.
You will be electroplated. Resistance is potential divided by current! - Dr. Matt

Neat suicide but deduct points for other deaths.
Top

There's a certain intersection in Michigan where people insist on running the red light and then hanging out half on the train tracks. When I drive, I refuse to run the red, and locals yell at me. The police agree with me, though.

DrMatt wrote:There's a certain intersection in Michigan where people insist on running the red light and then hanging out half on the train tracks. When I drive, I refuse to run the red, and locals yell at me. The police agree with me, though.

You will be electroplated. Resistance is potential divided by current! - Dr. Matt


The State Highway Patrol says the driver of a Greyhound bus that ran off an interstate and flipped over apparently suffered a medical condition, passing out after choking on coffee just before the accident in southwest Ohio.

The bus with Orthodox Christian pilgrims from Velikie Luky in the Pskov region of Russia crashed at 5:30 am local time near the city of Chernigov in northern Ukraine. The passengers were traveling to Pochaevskaya Lavra Monastery. There were 43 people on board the bus, including 41 passengers and 2 drivers.


In matters suicidal:
"Local media report that the driver was behaving strangely minutes prior to the collision. He reportedly stopped before the crossing, left the bus and stood next to it for several minutes. Then he took the wheel again and drove forward, despite passenger protests."
From http://rt.com/news/dozens-killed-bus-train/
You do not have the required permissions to view the files attached to this post.
Top

He survived the tragedy in Tembe, in which 21 students were killed, and to thank God he became a deacon and took the name Makarios.

From http://www.johnsanidopoulos.com/2013/07 ... sh-in.html
You do not have the required permissions to view the files attached to this post.
Top

… can be very dangerous:

The atomic bomb that fell on Nagasaki on August 9, 1945 detonated in Urakami only 500 m (1640 ft) from the cathedral, completely destroying it. As Assumption of Mary (August 15) was near, Mass was held on the day and was well attended. Due to heat wave and collapsed stones all were killed.
(From https://en.wikipedia.org/wiki/Urakami_Cathedral)

ed wrote:Extra extra extra bonus if the bus was part of a church outing of some sort (or mosque or temple outing)

Eight dead after church bus crashes into tractor-trailer, SUV in Tennessee
A fool thinks himself to be wise, but a wise man knows himself to be a fool.
William Shakespeare
Top

Peru Bus Plunge kills 51
Do you have questions about God? (note to self: bag bus tour of scenic Peru)
About that stereo
Top
168 posts