Tesla worth more than GM or Ford now

gnome wrote:I've had mine for longer than 100K, is there something I should be looking for? Not challenging your point, in fact I'm wondering if I'm running with something off in my transmission by now.

Nay, if it is working for you, good.
Top

Tesla announces another delay -- this time its the semi-truck

The event had been planned for Oct. 26 in California, but now Musk says it will take place on November 16. The reason: Tesla says it's "diverting resources" to fix problems with the production of it Model 3 sedan and to manufacture more batteries that it can send to areas affected by recent hurricanes.

Tesla (TSLA) announced earlier this week that that it's far behind on its planned production of the Model 3, its new, more affordable, electric car. During the first quarter, Tesla produced only 260 of the cars, far fewer than the 1,500 it planned to make.

I guess it's admirable that they want to manufacture batteries for the areas affected by recent hurricanes, but I wonder if it's putting their production schedule even further behind the 8-ball. Paying customers have put down deposits to buy these things.

He has both good ideas, but also some far-fetched ones. The hyperloop is a technological pipe dream as far as I can tell. Like a space elevator. Neat idea in theory, but too difficult to realize in practice.
A fool thinks himself to be wise, but a wise man knows himself to be a fool.
William Shakespeare
Top

Tesla is still having production problems:


"Production hell," as Elon Musk calls it, has reached a new level of blazing discomfort at Tesla. Last week, the company reported that it had fallen well short of its delivery goals for the Model 3, the $35,000 car that's supposed to transform Tesla from a niche player to the dominant force in the new age of electrified automobiles.

Tesla also pushed back its production plans for the Model 3 by a full quarter — a 5,000-unit weekly run-rate now won't arrive until the end of the second quarter of 2018.

Looks like reality may finally be catching up. At least Tesla is no longer worth more than GM. And its credit rating rating has been downgraded.


Moody's lowered its corporate family rating on Tesla to B3 from B2 and changed the outlook to negative from stable.
"Tesla's ratings reflect the significant shortfall in the production rate of the company's Model 3 electric vehicle," Moody's said in a release.
The price on Tesla's eight-year junk bond, which matures in 2025, fell to its lowest since it was issued in August. It hit 90.8 cents late Tuesday afternoon just ahead of the Moody's announcement, according to IHS Markit.

I wonder if Musk has too many big ideas for his own good.

Investors are dumb to be relieved. They are fudging the numbers.
From the article:

Tesla missed its quarterly target for producing its hot Model 3 cars, but investors still breathed a sigh of relief Tuesday that the numbers weren't more disappointing. During the last week of the quarter, the electric-car maker produced 2,020 Model 3s, coming up short of its goal to produce 2,500 Model 3 sedans a week.

So they say they made 2,020 Model 3s in the final week of the quarter. So how many did they make for the whole quarter? 8,180. There's 13 weeks in a quarter so they averaged 630 per week. I think they must have held back some of the production from previous weeks so that they could get over 2000 in that final week.

For Tesla, ‘Production Hell’ Looks Like the Reality of the Car Business


Mr. Musk once envisioned producing as many as 500,000 cars this year, and last summer he was hoping to be able to make 20,000 Model 3s a month by December. More recently, Tesla had aimed to produce at least 2,500 Model 3s per week by the end of the first quarter.

But that is more than it managed in the entire fourth quarter, and it has produced fewer than 10,000 in the first quarter, the company said Tuesday.

There have been signs of momentum, however. In the past seven days, Tesla said, it had produced 2,020 Model 3s, a rate it said it expected to sustain in the coming week.

In a filing with the Securities and Exchange Commission, Tesla said it expected its output to “climb rapidly” through the second quarter and reach 5,000 per week in about three months. It added that it was “rapidly addressing production and supply-chain bottlenecks, including several short factory shutdowns to upgrade equipment.”

Tesla has closely guarded the details of its manufacturing system, but Mr. Musk has described it as highly automated.

Anyway, the share price did rise over 5% on the news, even though it is dubious. If they are truly producing over 2000 per week now, then at a minimum they should produce about 26,000 in Q2, but more than that if they want to reach their goal of 5000 per week by the end of the quarter.
A fool thinks himself to be wise, but a wise man knows himself to be a fool.
William Shakespeare
Top

As I said before, I was skeptical that they really produced 2000 vehicles in the final week of the quarter. Now they are spinning this latest halt as something completely normal and expected, but I don't put much stock in their explanations because they have every incentive to fudge the truth if things are going badly.


Tesla Inc. confirmed Monday afternoon that it has halted production of its new Model 3 electric car for a second time.

“Our Model 3 production plan includes periods of planned downtime in both Fremont and Gigafactory 1,” a Tesla spokesman said, in repeating the company’s statement from a weeklong shutdown in February. “These periods are used to improve automation and systematically address bottlenecks in order to increase production rates. This is not unusual and is in fact common in production ramps like this.”

Tesla TSLA, -3.04% credited the first pause in production of the new car at its Fremont, Calif., plant with helping to ramp up production, which is behind the schedule Chief Executive Elon Musk laid out for the car last year. Some analysts posited that the delay allowed the company to build up its supply of batteries from the Gigafactory, Tesla’s battery factory in Reno, Nev., which is also trying to ramp up production to meet ambitious schedules.

If we are to believe them, we would have to believe that about one quarter of their entire quarter's production came in the final week. To put it another way, it would mean they averaged a rate of 500/week for the first 12 weeks of the quarter and then 2000 in the final week.
A fool thinks himself to be wise, but a wise man knows himself to be a fool.
William Shakespeare
Top

Musk tweeted he was wrong about using robots. Wants to hire hoomans to build cars
still working on Sophrosyne, but I will no doubt end up with Hubris
Top

robinson wrote:Musk tweeted he was wrong about using robots. Wants to hire hoomans to build cars

Tesla Did It, With A Ton Of Caveats

They may be cutting corners. But, they did up the volume by 55% over the previous quarter. Some of these cars are now being built in a tent, so there are questions about whether the quality is the same.
A fool thinks himself to be wise, but a wise man knows himself to be a fool.
William Shakespeare
Top

For sure, you're going to get your aerobic workout walking to work. I note (again) that the unbuilt part of the gigafactory is devoted to parking, and it's full. Even so, it's a long fucking walk to work. Once it's finished, it will be a much longer walk.

When stationed at navy shipyards, I became somewhat used to this but I never liked it. Some folks used bicycles but you had to heft them over two elevated walkways.
Top

For those who like numbers, here's a cross country trip in a tesla

After fiery Tesla crash, a closer look at how door locks work in emergencies

Model S driver died; how other automakers do latches, and the unusual Model 3 setup 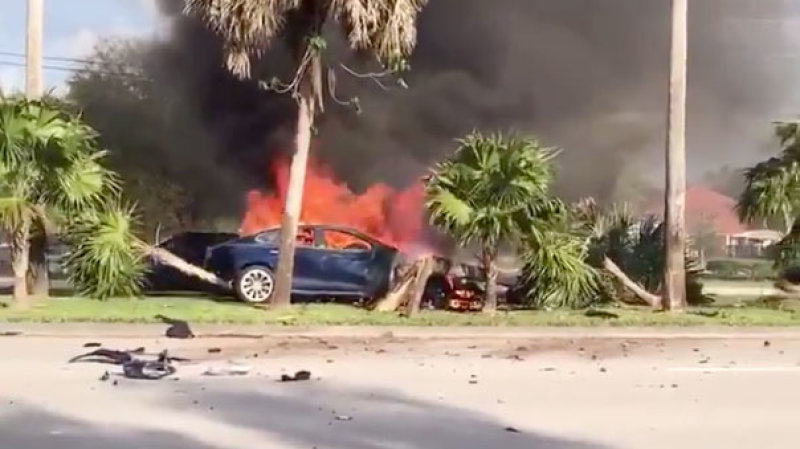 Car accidents unfold in stages, and at every stage it's important for the safety systems to work in concert, properly, to protect the occupants. When a critical safety device fails, the entire system falls apart — and people get hurt, or die. Take for example the high-speed crash involving a 2016 Tesla Model S this past Sunday. The driver of the electric car was reportedly speeding through traffic before he lost control and crashed into a tree. The Tesla burst into flames, and neither he nor emergency responders were able to open the door.

We can't yet know exactly what happened in this specific case, but it could have been a couple different things. The driver could have been incapacitated. Or, post-crash, the door mechanism might not have operated as it should have due to damage. On a Tesla Model S, both the interior and exterior door mechanisms are unusual.

The interior mechanism is essentially a traditional-style door release pull with two stops. The first stop triggers an electronic door release, and opens the door. Open to full extension, and a mechanical door release operates, even if there's a loss of power — it isn't confusing to operate.

The second thing to go wrong was access from outside. The way Tesla puts it, this should have been easy. An emergency response guide for this car states that, "When an airbag inflates, Model S unlocks all doors, the trunk, and extends all door handles." The problem here? Those door handles didn't extend, so there was no way for anybody to open the supposedly unlocked doors in the time the driver had left. Tesla uses a nifty flush fitment for its exterior door handles on the Model S that pop out to welcome you as you walk up to the car with the key. If there isn't any power to the car, those are not going to pop out.

The last-ditch effort is for a first responder to reach inside the car and use the interior door handle. A police officer on the scene reportedly tried to do exactly that, but was unable to break the glass before the fire became too intense. Witnesses said the flames quickly engulfed the car, leaving scant time for a fire crew to attempt a rescue.